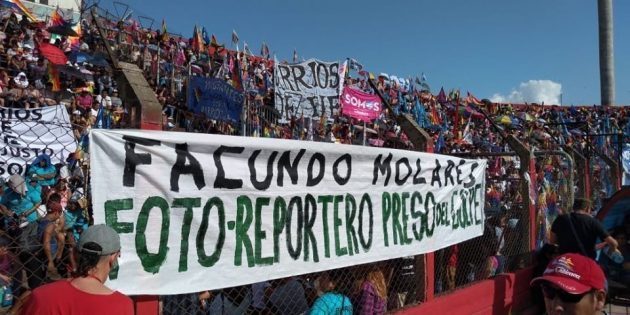 Time is running its course and the Bolivian dictatorship is up against the clock, but its fascist essence and nature prevents it from beautifying its deteriorated image. The coup plotters, acting clumsily, aspire to perpetuate themselves through the coming elections in May, but they persist in maintaining unresolved cases of flagrant violations of human rights and even crimes against humanity. These illicit acts that they prescribe to us in time will follow them as long as they hold power and after they are expelled by the organized people, who at one point will recover democracy and vindicate the patriotic management of the Movement Towards Socialism and the government of Evo Morales Ayma.

They maintain their diplomatic conflicts with Spain, Argentina, Mexico and other countries; they broke relations with Cuba by mandate of the discredited ministry of colonies of American States that is the OAS, led by the CIA agent, Luis Almagro.

A group of former officials of the legitimate government of Evo Morales, endorsed in last October’s elections and overthrown by the traditional military coup, are still being deprived of safe-conduct to leave the country.

They are in precarious conditions, their will is being broken, the usurpers have appealed to the most vile schemes, such as arresting their relatives, servants, men and women close to the asylum seekers, they have been confined in prison and the most perverse crimes have been fabricated against them, which have no legal basis, but allow them to become negotiable hostages.

But the MAS officials are also protected by the dignified attitude of the Mexican authorities who, with the good practices of their long-standing human rights policy and solid diplomacy, have curbed the accusations of the self-proclaimed.

The coup government are enemies of the national and international press. The suspected death of Argentinean journalist Sebastian Moro, which occurred in the days of the coup and whose relatives are calling for truth and justice, has not been clarified. Other media professionals have been harassed and prevented from fully exercising their profession in the midst of a country that, despite systematic repression, is not controlled, is unsafe and extra-judicial outcomes are daily experiences.

The most notorious case is the confinement, for more than three months, of the Argentinean photojournalist Facundo Molares, who is dying in a prison without medical assistance for his ailments, in a legal limbo. They have ignored the request, one month ago, of his lawyer, to be immediately transferred to a hospital for care. The requests of his relatives to be able to visit him, the demands of social organizations in Argentina and in other countries that demand his release and transfer to his native country are ignored. It would seem that the military is advocating for him to be left to die, a warning that hangs over them.

His father has made great efforts, going to the media, participating in solidarity events, where his sad testimonies have been heard, which explain that Facundo was only engaged in his journalistic work in the days before the coup when he suffered acute kidney failure, was admitted to a private clinic, then taken to a hospital from where he was kidnapped by coup forces, who held him incommunicado in the Chonchocoro prison, where he is currently and where he lost the sight of his right eye.

The legal and diplomatic assistance has been tortuous, the Argentine government authorities have made efforts for a prompt solution, as its gravity demands, and for humanitarian reasons to end his captivity, but the late jailers have turned a deaf ear to diplomatic requests.

The self-proclaimed ones think they will be eternal when they will be renewed and validated at the ballot boxes, for that reason they ignore any precautionary measures, including one sent by the Inter-American Commission of Human Rights, CIDH of the OAS, addressed to the Ministry of Foreign Affairs of the Plurinational State of Bolivia, dated February 10, 2020, which contains the request for information at the request of Néstor Hugo Molares, father of Facundo, and calls on him to provide information on his physical and legal situation within a period of seven days.

The note, protected by Article 25 (5) of the IACHR’s Regulations, asked for information on Facundo Molares’ health situation, his diagnosis, whether he was receiving the necessary treatment and whether he would have access to regular medical consultations, as well as to provide the corresponding medical certifications, which would testify to whether his state of health had improved or worsened during his confinement or whether it would remain stable.

The terms are clear and the coup plotters are in a quagmire, how to respond to this precautionary measure of the IACHR, without distorting the reality of the confinement, they will have to resort to a mountain of lies. The truth is that the time has expired for a truthful response. International solidarity is demanding that Facundo be presented alive before a commission of the IACHR; it is not enough to ask what has been the fate of the kidnapped person, which is known, it is necessary to preserve his life.