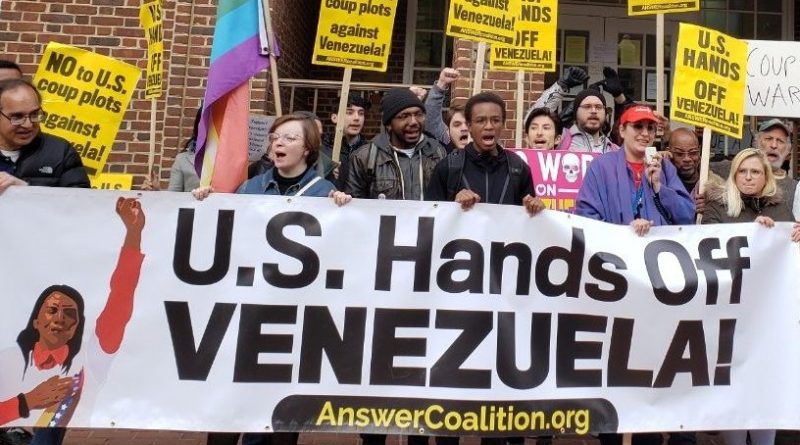 The 50-page-long section of the bill that codifies legislation about Venezuela is titled ‘‘Venezuela Emergency Relief, Democracy Assistance, and Development Act of 2019’’ or ‘‘VERDAD Act of 2019’’

Last December 16 both houses in the US approved the appropriation bill to be signed by president Trump. Aside from the mind-boggling amount of $1.4 trillion that was approved in total our interest was in looking at the details concerning Venezuela.

A press release issued by the organization Washington Office on Latin America (WOLA) is quite misleading in its over optimism suggesting that the appropriations bill “rejects the use of force in Venezuela and endorses a negotiated solution to the country’s crisis”. Another interpretation may be more realistic.

The full bill of 1773 pages includes a section about Venezuela. The first reference to the country is to state that “not less than $30 million shall be made available for democracy programs for Venezuela” and that the funds “shall be made available for assistance for communities in countries supporting or otherwise impacted by refugees from Venezuela, including Colombia, Peru, Ecuador, Curacao, and Trinidad and Tobago”. It is not possible to know if this is above the previously reported $52 million announced by Mark Green, the administrator of the US Agency for International Development (USAID) last September. To make it more confusing the same report states that this “is in addition to hundreds of millions of dollars already committed by the US to support the more than 4 million vulnerable Venezuelans who have fled the country’s crisis.”

The 50-page-long section of the bill that codifies legislation about Venezuela is titled ‘‘Venezuela Emergency Relief, Democracy Assistance, and Development Act of 2019’’ or ‘‘VERDAD Act of 2019’’.

The legislation co-sponsored by senators Robert Menendez and Marco Rubio, was introduced last April in the Senate, and later referred to the Committee on Foreign Relations. That same April self-appointed interim president Juan Guaidó staged (another) coup at La Carlota air base in eastern Caracas and called for the military to rise up against Maduro in the hope that the military would defect in mass and join him. The timing of the legislation and the attempted coup may have been carefully planned to coincide, but the coup never happened.

The legislation with the misnomer VERDAD, which means TRUTH in Spanish, is a repetition of untruths to justify the need to provide humanitarian relief. It has the standard US government recognition for the president of the National Assembly Juan Guaidó who was “sworn in” (read, self-appointed) as interim president on January 23, 2019 following the “fraudulent” (read, not suitable to the US) election of May 20, 2018. It further states the US full support for the International Contact Group on Venezuela (European Union, France, Germany, Italy, Spain, Portugal, Sweden, the Netherlands, the United Kingdom, Ecuador, Costa Rica, and Uruguay), the OAS and the Lima Group (Argentina, Brazil, Canada, Chile, Colombia, Costa Rica, Guatemala, Guyana, Honduras, Panama, Paraguay, Peru, and Saint Lucia). Relevant comparison here is the almost 120 countries that have recognised the Maduro government.

Moreover, the VERDAD Act calls for “new presidential election in Venezuela that complies with international standards” (read, accepted by the US), with international observers like the OAS (read, the organization that contributed to the military coup in Bolivia), and boosting “independent media outlets” (read, corporate media). To carry out this activity the bill grants an extra $17.5 million to the office of the Secretary of State.

The VERDAD Act of 2019 has nothing new that we had not heard or reported before with the exception, perhaps, of the statement referred to by WOLA, “Nothing in this title [Title I – Venezuela Assistance] may be construed as an authorization for the use of military force.” But that does not give any reassurance to Venezuelans because in a Hybrid Warfare scenario it is very easy to create a situation where new conditions – likely fabricated under the pretence of national security – may be used on a whim to trigger a military intervention.

Indeed, a Hybrid Warfare uses some means that are readily recognisable such as infowar, discredit of leadership, recognition of an opposition, implementation of sanctions, financial and economic blockade, among others. These have all been utilised in the case of Venezuela, and the VERDAD Act spells them out with a dollar amount. But there are many other means of a Hybrid Warfare to achieve regime change that are not announced or perceptible, at least not until we see the resulting impact. For instance, the triggering of protests and riots, the arming of the opposition, acts of sabotage, promises of bribery for treason, and others.

If the US premises that Nicolas Maduro is a dictator and that there is no democratic process in Venezuela are false in order to justify its ideological goal, how can we trust Washington’s accountability process in the management of those funds appropriated for “humanitarian relief”? Wouldn’t it be more cost effective to end the sanctions? What if those funds are used to co-opt other governments in the region, the Lima Group countries, the OAS, or to create a paid mercenary group such as that proposed by private security firm Blackwater to topple Maduro?

The ultimate question is, is the US government using its legislative power to legitimize a Hybrid Warfare against Venezuela with the VERDAD Act of 2019?

Featured image: Activists gather in front of the Venezuelan embassy in Washington, DC in March, 2019.