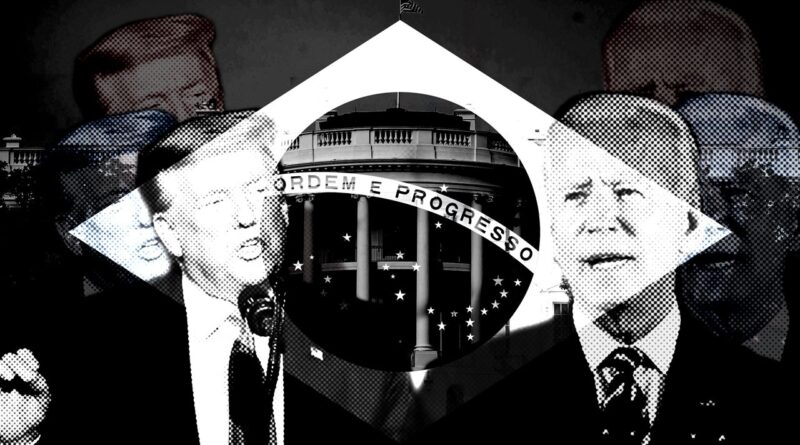 If the US has been the number one enemy of democracy and freedom in Latin America for the past century, why would a new President make any difference?

In a recent interview for the Brazilian business newspaper O Valor, Tom Shannon, who was a key US State Department actor on Latin American affairs during the Bush, Obama and Trump presidencies, said he believes an administration led by Joe Biden would maintain good relations with the Bolsonaro government with the goal of working together to overthrow the democratically elected government of Venezuela.

Knowing what we know about the Obama administration’s role in creating and managing the joint US DOJ/Curitiba public prosecutors’ Operation Car Wash, which led to the 2016 coup against Dilma Rousseff, and how the Trump administration continued the operation through Lula’s imprisonment, with Steve Bannon supporting the illegal social media strategies which led to the election of neofascist President Jair Bolsonaro, one logical deduction could be that the November 3 US presidential elections will make no difference for Brazil. After all, if the US has been the number one enemy of democracy and freedom in Latin America for the past century, what difference would changing a president make? I believe that this opinion borders on nihilism, however, because there are a few significant benefits that a Biden presidency could represent for the people of Brazil, even if they may be inadvertent on the part of Biden himself.

1) Brazilian President Bolsonaro worships Trump, has convinced his followers that nearly everyone in the US loves him too and that any US criticism of him is “fake news”, perpetrated by “communists”. Biden may not change US predatory relations with Brazil but his victory will delegitimize Bolsonaro to some of his followers.

2) In 2019, Brazilian immigrants sent $2.8 billion in remittances to their family members back in Brazil. Although this is a tiny percentage of GDP, it has a significant effect on some regions in Brazil, most notably in states which have sent a lot of immigrants to the US, like Minas Gerais. Two policies promised by the Biden campaign, the legalization of 11 million undocumented immigrants and the doubling of the minimum wage, would certainly increase the value of remittances coming into the country from the USA.

3) US corporations that profit from Amazon deforestation, like Cargill, donate to both political parties and corporate democrats like Joe Biden and Kamala Harris are hardly friends of the environment. However, most US environmentalists vote democrat. The party is therefore more susceptible to pressure from below than the Republicans, whose current leader has repeatedly said he doesn’t believe climate change even exists. During the first debate, Biden pledged to throw money at Brazil to solve the Amazon deforestation crisis. This shows that he doesn’t really understand the problem, which is primarily driven by US, European and Asian predatory consumption patterns of commodities like beef and soy, not a lack of funding to fight man-made forest fires. Nevertheless, he was the only of the two candidates to express any concern whatsoever and with enough pressure from below, some progress may be made to punish US companies that benefit from illegal deforestation – something that there is 0 chance of happening in a continued Trump presidency.

RELATED CONTENT: Brazil, Southcom and the Push Towards War

4) Both hegemonic parties in the US are right wing and corporate funded, but the Democrats have a growing minority caucus of progressives, and a traditional relationship with organized labor (that was weakened starting in the Clinton years). In 2016, when 43 US members of Congress issued a complaint about the “legislative coup” underway against Dilma Rousseff, 100% of them were Democrats. The same can be said of various subsequent solidarity statements with Brazil, such as the August, 2019 congressional inquiry into the US DOJ’s role in the corrupt Operation Car Wash investigation and Lula’s illegitimate political imprisonment, drafted by Congressman Hank Johnson and signed by 12 other democratic members of congress. As most of the middle class, Brooklyn left spent their time badmouthing the PT over ideological purity issues, the AFL-CIO continually pressured members of the congressional black and progressive caucuses to act against the coup and Lula’s imprisonment. AFL-CIO leader Richard Trumka even visited Lula in prison to give him the George Meany-Lane Kirkland Human Rights Award. A Biden presidency will strengthen the ability of US labor unions to engage in solidarity actions with their Brazilian counterparts in union federations such as the CUT, which form the core base of Brazil’s organized left.

5) The US and Brazil are now the World’s two worst countries in terms of covid-19 response, thanks in part to Donald Trump’s continual barrage of anti-scientific misinformation and Jair Bolsonaro’s sycophantic emulation of this behavior. One example is the public campaign carried out by Bolsonaro in favor of hydroxychloroquine, which started after Donald Trump shipped 2 million doses of it to Brazil after it was banned for treatment of Covid-19 by the FDA. For months, Bolsonaro appeared on social media assuring Brazilians that they didn’t need to wear masks and could go about their normal day to day routines carefree because there was a cure. The confusion that this generated with the public caused tens of thousands of deaths. If Biden wins, Bolsonaro will no longer be able to hold a US president as an example to his followers in promoting his necropolitical pandemic response.

It is important to remember that despite these examples of benefits of a Biden presidency, there is no sign that if a left wing candidate promising to undo the privatizations and deep austerity cuts implemented by the US-backed coup governments becomes a front runner in the 2022 election campaign, a Biden government would not step in to help a neoliberal candidate. Given the historical relationship between the Democrats and the center-right PSDB party I believe this support could come in the form of party insiders directly working on the campaign of a candidate like current São Paulo Governor João Doria, and that it would only support Bolsonaro as a last ditch effort to prevent a left takeover. Even this is slightly better than what the Trump administration would probably do. A narcissism of small differences? Perhaps. But at this state of the conjuncture, these difference represent human lives.