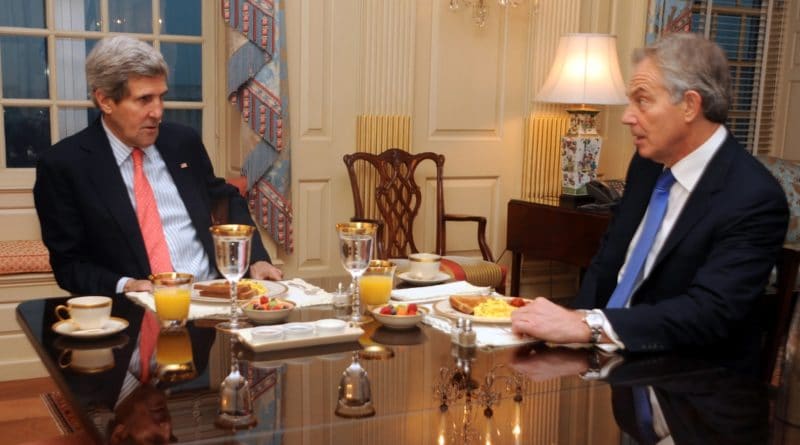 US Secretary of State John Kerry promoted a plan to kickstart Gaza’s economy with sweatshops making zippers and buttons for Israeli designers. This “Initiative for the Palestinian Economy” was drafted by consulting firm McKinsey for Tony Blair.

The Israeli siege of the Gaza Strip has brought with it a depressingly familiar ritual: The Israeli military destroys large swaths of the ghettoized coastal enclave, leaving tens of thousands homeless, a trail of carnage and piles of rubble. Then, Western and Arab diplomats rush to some Middle Eastern capital to play janitor to the Jewish state, pledging billions in aid to clean up Israel’s mess.

And like clockwork, Israel destroys everything all over again just a year or two later, bombarding Gaza with unprecedented ferocity.

When Israel’s international janitorial crew gathered this week in Cairo with a pledge to raise $5 billion to help rebuild the $8 billion in damage Israel caused to Gaza’s civilian population, it was assured by Israeli Minister of Transportation Yisrael Katz that its efforts were utterly futile.

“The Gazans must decide what they want to be Singapore or Darfur,” Katz remarked, leveling the threat of genocide against the fantasy of economic prosperity. “They can pick between economic recovery and war and destruction. If they choose terror, the world should not waste its money. If one missile will be fired, everything will go down the drain.”

The message was not lost on the diplomats assembled in Cairo. As one told AFP, ”We have seen infrastructure projects that we have contributed to which have been destroyed.” The diplomat complained that the sustained Israeli assaults on Gaza’s infrastructure had prompted “considerable donor fatigue.”

Johan Schaar, the head of Development Cooperation for the Swedish Consulate in occupied Palestine, conceded that Israel’s limitless capacity for violence had rendered the conference a fruitless endeavor. “No one can expect us to go back to our taxpayers for a third time to ask for contributions to reconstruction and then we simply go back to where we were before all this began,” he moaned. “That is out of the question.”

Only about half of the $5 billion pledged at Cairo would actually be budgeted towards Gaza reconstruction. The rest, according to the Palestinian Authority Prime Minister Rami Hamdallah, would help keep his unelected government afloat in the West Bank, where 44% of its civil service corps are employed in the security sector — paid to police fellow Palestinians on behalf of Israel’s occupation.

Under the guise of restoring the basic functions of Gaza, an entity that will be uninhabitable by 2020, according to the UN, and which is substantially unlivable today, the diplomats in Cairo found a backdoor channel to sustain the police state that rules the West Bank’s ever-shrinking Bantustans.

“Without a [political breakthrough] I think we’ll probably end up giving but it will be repackaging the assistance that we already give,” a European diplomat told the UN news service, IRIN. “In reality none of it will be new money. There isn’t a terrible amount of political commitment or hope.”

The diplomats gathered in Cairo knew the donor conference was a farce that would do little to relieve the suffering of Gaza’s besieged population. Yet none appeared willing to stray from the status quo.

RELATED CONTENT: Technocracy Now: The US is Working to Turn Lebanon’s Anti-Corruption Protests Against Hezbollah

They addressed the destruction of Gaza as though it was the result of a random natural disaster and not the malevolent wrath of an anachronistic settler-colony armed to the teeth by the world’s lone superpower.

Indeed, Israeli violence against Gaza’s civilian population was scarcely mentioned at all, nor were any diplomatic measures against it proposed. And with Hamas barred from participation in the conference, the government of Gaza was unable to raise the issue.

Ignoring the occupation, legitimizing the dictator

When US Secretary of State John Kerry appeared at the lectern, he pledged a piddling $212 million to Gaza, nearly $700 million less than the US gave after the 2008-2009 Israeli assault known as Operation Cast Lead.

He then proceeded to gush over the “efforts” of Egyptian President Abdel Fatah Al-Sisi, whose primary achievement since winning a fraudulent election has been suffocating Gaza from the south, wrecking the tunnel economy that enabled the importation of everything from medical supplies to construction material.

“I think it’s fair to say, [Sisi has] really helped to reaffirm the pivotal role that Egypt has played in this region for so long,” said Kerry, lending the despot the legitimacy he was desperately seeking. The military coup and subsequent massacres of peaceful protesters that Sisi oversaw were now forgotten, as were the 40,000 political prisoners languishing in Egyptian jails.

Hours after the event, Kerry met privately with Sisi to promise a shipment of 10 Apache attack helicopters — his reward for a job well done.

Kerry praised Israel as a generous nation taking “positive steps” to help the sustain Gaza’s economy and get the beleaguered territory back on its feet. He trumpeted “new measures that should allow increased trade in agricultural goods between Gaza and the West Bank, and more permits for Palestinian business leaders to enter Israel,” omitting the fact that Israel had banned rebuilding materials to Gaza, indefinitely delaying 60 truckloads from entering.

“We hope to see many more positive steps announced and implemented in the coming weeks and months,” Kerry declared.

Finally, Kerry touted a little-understood economic plan called the Initiative for the Palestinian Economy, claiming it was a recipe for reducing Palestinian unemployment to 8 percent — the same rate as in the US.

He credited McKinsey and Company, the US-based management consulting firm that helped Enron exploit California’s energy crisis, with producing the initiative’s analysis of the Palestinian economy.

“We’re talking about real investment that produces real jobs and opportunities for thousands of Palestinians,” proclaimed Kerry, “and that is what is going to make the difference over the long term.”

Sweatshops for Gaza and millions for Tony Blair Inc.

So what was the Initiative for the Palestinian Economy?

Summary of the Palestinian … by Max Blumenthal on Scribd

When he rolled out the plan at the 2013 World Economic Forum in Jordan, Kerry hailed it as “bigger, bolder and more ambitious than anything proposed,” promising a $4 billion injection of investments into the Palestinian economy.

Despite his optimism, Kerry stonewalled all reporters seeking details. All that was known was that the plan’s implementation would overseen by Tony Blair, the corruption stained Quartet Representative who has earned close to $100 million advising a vast web of corporations, banks and dictators from Kazakhstan’s Nursultan Nazarbeyev to Egypt’s Sisi.

To lend the initiative momentum on the ground, Kerry recruited Munib Al-Masri, the Palestinian tycoon who lives high above the poverty stricken Balata Refugee Camp in an Italian revival-style mansion. He had also enlisted the financial know-how of Tim Collins, a major Democratic Party donor and vulture capitalist whose Ripplewood Holdings leveraged buyout firm liquidated Hostess, sending 18,000 unionized workers into the ranks of the unemployed.

These were the selfless visionaries called by history to save Palestine.

Last year, a Palestinian businessman furnished me with a 14-page paper produced on behalf of the Quartet by McKinsey and Company which outlined the goals of the Initiative for the Palestinian Economy.

It was a bizarre document that analyzed Gaza and the West Bank as though they were normal developing nations whose economic performance could be optimized with just a little technical know-how and a few innovative marketing strategies. Not once was Israel’s occupation of Palestine mentioned in the paper.

McKinsey’s consultants found that the walled-in Gaza ghetto “underperforms on key tourism metrics,” but the brainy analysts couldn’t seem to say why, alluding only to “regional instability” and “low awareness of existing tourism destination sites.”

Ignoring the Israeli siege, the factor that made literally everything McKinsey proposed a total fantasy, the firm proposed “a range of new hotel offerings … underpinned by aggressive marketing.” If only Gaza could find a winning brand, McKinsey suggested, boutique spas would suddenly blossom along its coastline, providing stunning vistas of Israel’s naval blockade.

To bring Gaza’s beleaguered economy back to life, McKinsey called for the proliferation of sweatshops that would churn out zippers and buttons for “high-end designers in Israeli clothing markets requiring relatively small, customized orders not handled well by bulk-order manufacturers.” So much for Singapore on the Mediterranean.

Under international guidance, Gaza would become an occupied Bangladesh, producing accoutrements for trendy Tel Aviv fashionistas. And perhaps Gaza’s sweatshop workers might even fabricate some zippers for a custom order of Israeli army uniforms when the hipsters of Tel Aviv are called up for the next ground invasion.

Nearly every construction and agricultural project envisioned by McKinsey has been nullified by Israel’s siege and its accompanying military assaults. Not a single dollar has been pledged to the Northern Gaza Emergency Sewage Treatment Project, which was highlighted in the McKinsey document as one of the Quartet’s major achievements.

And not one of the affordable housing units McKinsey proposed has been built. Instead, Israel damaged or destroyed at least 18,000 homes in Gaza this summer and obliterated 128 businesses while bombing the strip’s already overtaxed sanitation, electricity and water supply facilities to smithereens.

So much for “transformative change” and “greater life-changing opportunities on the ground.”

Even as he conceded that aid to Gaza was a “band-aid fix,” Kerry offered no political remedies beyond the framework plan for two states that the Israeli government resoundingly rejected earlier this year. Thus his appearance in Cairo and the entire spectacle of the donor conference added another layer of window dressing on the brutal status quo.

Meanwhile, as the diplomats returned home, Israeli officials ratcheted up their bloodcurdling imprecations.

“If one Protective Edge was not enough, you will get two and three until Hamas terror ends,” Transportation Minister Katz proclaimed. “I prefer 1,000 Palestinian mothers crying than letting one Jewish mother cry.”