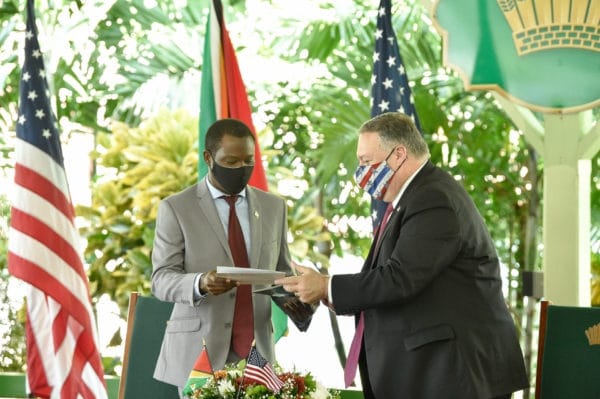 US Secretary of State Mike Pompeo completed a whirlwind tour of Surinam, Guyana, Brazil and Colombia to boost anti-Venezuela efforts.

Mérida, September 21, 2020 (venezuelanalysis.com) – The US and Guyanese governments have announced that they are to begin joint military patrols on the disputed Venezuela-Guyana border.

The decision comes amid increased oil exploration in the territorial waters of the Essequibo strip by US multinational Exxon Mobil, which is looking to exploit the estimated 15 billion barrels of oil recently discovered there.

Venezuela claims that the strip, including the offshore Stabroek bloc where the majority of the reserves were found, historically forms part of its territory and was taken away by an illicit arbitration tribunal in 1899. In 1966, both sides agreed to nullify the 1899 ruling and work towards a mediated solution, with the case currently sitting with the International Court of Justice. Caracas has repeatedly pointed out that Georgetown’s awarding of oil exploration contracts violates the 1966 Agreement.

According to US Secretary of State Mike Pompeo, who wrapped up a whirlwind three-day tour of Venezuela’s neighbours over the weekend, the joint maritime patrols will be aimed at “drug interdiction” and providing “greater security” for Guyana.

While the scope, nature and makeup of the patrols is yet to be released, it is expected that they will work alongside US naval warships controversially deployed to the Caribbean in April in alleged “anti-narcotics” operations targeting Venezuela.

Apart from Guyana, Pompeo also visited Surinam, Brazil and Colombia between Thursday and Saturday as part of efforts to increase pressure against Venezuela.

In each country, the former CIA director took aim at Venezuelan President Nicolas Maduro, repeatedly describing him as a “narcotics trafficker.” Upon returning to the United States, Pompeo announced that Washington would sanction Maduro, whom he described as Venezuela’s “former president,” but offered no further details.

“Maduro has to go,” Pompeo explained from Guyana. “We know that the Maduro regime has decimated the people of Venezuela and that Maduro himself is an indicted narcotics trafficker. That means he has to leave,” he went on to say. Venezuela has dismissed the US Justice Department “narco-terrorism” charges, while critics have pointed towards US agency data showing most drugs arrive in the US from Colombia through Pacific and Central America routes.

From the Brazilian border city of Boa Vista, the US politician struck a similar tone, promising the “fall of the Maduro regime,” while Brazilian Foreign Minister Ernesto Araujo likewise vowed that the Venezuela government will “disappear.”

While in Brazil, Pompeo pledged another US $348 million to help the region deal with the Venezuelan migrant population, including $30 million for Brasilia.

Pompeo’s last stop was Colombia, where he praised Colombian President Ivan Duque for his “support” for Venezuela’s opposition frontman Juan Guaido, as well for what Pompeo described as “the democratic transition for a sovereign Venezuela free of the malign influence of Cuba, Russia and Iran.” For his part, Duque promised to back a “new chapter in [US-Colombia] bilateral relations.”

Pompeo’s visit to Bogota coincided with joint “anti-narcotics” military exercises between the two countries. The ‘Poseidon’ exercises, which were held between Friday and Monday, were concentrated in the northern Sucre department of the Latin American nation, a short distance from the United States’ Naval Base in Cartagena City. The visit also came amid the on-going scandal caused by the unauthorised arrival of US elite Security Force Assistance Brigade (SFAB) troops in August.

Venezuelan authorities were quick to blast Pompeo’s comments and his presence in Latin America.

“Mike Pompeo is calling for war against Venezuela, but he has failed,” the Venezuelan president said in a state television address on Friday. “Not even a thousand Mike Pompeos will bring war to South America,” he added. For his part, Venezuela’s Foreign Minister Jorge Arreaza also accused Pompeo of carrying an “obsession to make the people of Brazil and Venezuela enemies.”

Pompeo’s tour was also met with grassroots opposition, with a host of parties, movements and politicians rejecting his presence. Speaking on behalf of the Workers’ Party of Brazil, former president Lula da Silva claimed that Pompeo was looking to “provoke Venezuela.” “Whether we like him or not, Venezuela has an elected president. The United States needs to drop this habit of wanting to be the world’s sheriff,” he told press on Friday.

Criticism also arrived from outside Latin America, with China firmly rejecting the US secretary of state’s attacks against Beijing’s investment plans in the region.