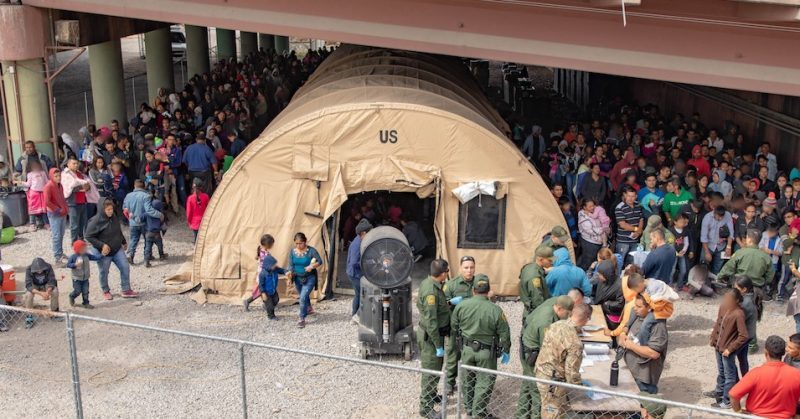 The conditions in El Paso reminded some observers of the worst of humanity.

Hundreds of migrants are being held by border agents in a fenced in encampment under a bridge in El Paso, leading to anger and accusations that the American government is holding people in “concentration camps.”

Images posted online by reporters and advocates painted a disturbing scene in the Texas city. Lines of migrants behind fencing, being processed by agents from U.S. Customs and Border Patrol (CBP), walked into a camp area that appeared to be standing room only.

This is what the Paso Del Norte Border Patrol station in El Paso looks like today. The queue of migrants who turned themselves in is stretched to the parking lot. pic.twitter.com/PTSblYP74R

Reporters from The Washington Post caught pictures of crowds of migrants behind fencing.

RELATED CONTENT: Trump: I Have Helped Puerto Rico More Than Any Living Human

This is El Paso right now, where hundreds of migrant families are being held in the parking lot of a Border Patrol station because there is no room for them inside, or anywhere else. pic.twitter.com/lFGZ9zRcZk

Hundreds of migrants are being held under the Paso Del Norte Bridge in El Paso, near the site of @CBP Commissioner McAleenan’s press conference. pic.twitter.com/FeHWauFD53

The encampment, which is referred to by CBP as a “transitional shelter,” was set up in the last month according to reporting from Buzzfeed.

“The tent that is set up underneath the Paso Del Norte port of entry and adjacent to the Border Patrol’s Processing Facility is a transitional shelter,” a CBP spokesperson told the outlet. “Due to the large volume of apprehensions within the El Paso Station’s Area of Responsibility, the agency has undertaken additional measures to facilitate processing.”

Photos of the hundreds of people held at the site spread over social media on Wednesday. The publicity came alongside an appearance at El Paso by CBP commissioner Kevin McAleenan, who said that the border was “at its breaking point.”

“CBP is facing an unprecedented humanitarian and border security crisis all along our Southwest border,” said McAleenan, “and nowhere has that crisis manifested more acutely than here in El Paso.”

As a number of immigration advocates pointed out, that’s a hard sell in 2019 given the amount of border crossings two decades ago—crossings peaked at 1.6 million a year in 2000. The conditions in El Paso reminded some observers of the worst of humanity.

Meanwhile, according to reporting from The Texas Tribune, CBP pulled 750 agents from across Texas’s southern border’s ports of entry to El Paso to help with processing. There is no return date as yet for those agents, raising concerns that the border will become even more closed off in the near future.