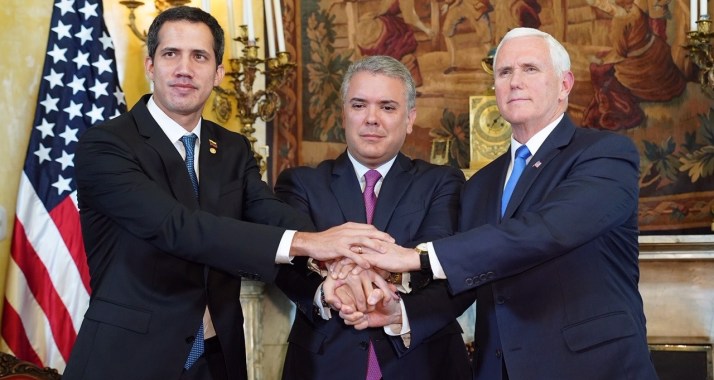 The US-funded CANVAS organization that trained Juan Guaido and his allies produced a 2010 memo on exploiting electricity outages and urged the opposition “to take advantage of the situation…towards their needs”.
By Max Blumenthal

A September 2010 memo by a US-funded soft power organization that helped train Venezuelan coup leader Juan Guaido and his allies identifies the potential collapse of the country’s electrical sector as “a watershed event” that “would likely have the impact of galvanizing public unrest in a way that no opposition group could ever hope to generate.”

RELATED CONTENT: “Lights Out!” Did Trump and His Neocons Recycle Bush-Era Plan to Knock Out Venezuela’s Power Grid?

The memo has special relevance today as Guaido moves to exploit nationwide blackouts caused by a major failure at the Simon Bolivar Hydroelectric Plant at Guri dam – a crisis that Venezuela’s government blames on US sabotage.

It was authored by Srdja Popovic of the Center for Applied Non-Violent Action and Strategies (CANVAS), a Belgrade-based “democracy promotion” organization funded by the US government that has trained thousands of US-aligned youth activists in countries where the West seeks regime change.

This group reportedly hosted Guaido and the key leaders of his Popular Will party for a series of training sessions, fashioning them into a “Generation 2007” determined to foment resistance to then-President Hugo Chavez and sabotage his plans to implement “21st century socialism” in Venezuela.

In the 2010 memo, CANVAS’s Popovic declared, “A key to Chavez’s current weakness is the decline in the electricity sector.” Popovic explicitly identified the Simon Bolivar Hydroelectric Plant as a friction point, emphasizing that “water levels at the Guri dam are dropping, and Chavez has been unable to reduce consumption sufficiently to compensate for the deteriorating industry.”

RELATED CONTENT: Venezuela – Guaido Planned to Use Arms – Frustration Over Stalemate Sets in

Speculating on a “grave possibility that some 70 percent of the country’s electricity grid could go dark as soon as April 2010,” the CANVAS leader stated that “an opposition group would be best served to take advantage of the situation and spin it against Chavez and towards their needs.”

Flash forward to March 2019, and the scenario outlined by Popovic is playing out almost exactly as he had imagined.

On March 7, just days after Guaido’s return from Colombia, where he participated in the failed and demonstrably violent February 23 attempt to ram a shipment of US aid across the Venezuelan border, the Simon Bolivar Hydroelectric Plant experienced a major and still unexplained collapse.

Days later, electricity remains sporadic across the country. Meanwhile, Guaido has done everything he can “to take advantage of the situation and spin it” against President Nicolas Maduro – just as his allies were urged to do over eight years before by CANVAS.

The Venezuelan government has placed the blame squarely on Washington, accusing it of sabotage through a cyber-attack on its electrical infrastructure. Key players in the US-directed coup attempt have done little to dispel the accusation.

In a tweet on March 8, Secretary of State Mike Pompeo framed the electricity outage as a pivotal stage in US plans for regime change:

Maduro’s policies bring nothing but darkness.

No food. No medicine. Now, no power. Next, no Maduro.

15.9K people are talking about this

At noon on March 7, during a hearing on Venezuela at the Senate Foreign Relations Subcommittee, Sen. Marco Rubio explicitly called for the US to stir “widespread unrest,” declaring that it “needs to happen” in order to achieve regime change.

“Venezuela is going to enter a period of suffering no nation in our hemisphere has confronted in modern history,” Rubio proclaimed.

Around 5 PM, the Simon Bolivar Hydroelectric Plant experienced a total and still unexplained collapse. Residents of Caracas and throughout Venezuela were immediately plunged into darkness.

At 5:18 PM, a clearly excited Rubio took to Twitter to announce the blackout and claim that “backup generators have failed.” It was unclear how Rubio had obtained such specific information so soon after the outage occurred. According to Jorge Rodriguez, the communications minister of Venezuela, local authorities did not know if backup generators had failed at the time of Rubio’s tweet.

Back in Caracas, Guaido immediately set out to exploit the situation, just as his CANVAS trainers had advised over eight years before. Taking to Twitter just over an hour after Rubio, Guaido declared, “the light will return when the usurpation [of Maduro] ends.” Like Pompeo, the self-declared president framed the blackouts as part of a regime change strategy, not an accident or error.

Two days later, Guaido was at the center of opposition rally he convened in affluent eastern Caracas, bellowing into a megaphone: “Article 187 when the time comes. We need to be in the streets, mobilized. It depends on us, not on anybody else.”

Article 187 establishes the right of the National Assembly “to authorize the use of Venezuelan military missions abroad or foreign in the country.”

Upon his mention of the constitutional article, Guaido’s supporters responded, “Intervention! Intervention!”

Exploiting crisis to “get back into a position of power”

As Dan Cohen and I reported here at the Grayzone, Guaido’s rise to prominence – and the coup plot that he has been appointed to oversee – is the product of a decade-long project overseen by the Belgrade-based CANVAS outfit.

CANVAS is a spinoff of Otpor, a Serbian protest group founded by Srdja Popovic in 1998 at the University of Belgrade. Otpor, which means “resistance” in Serbian, was the student group that worked alongside US soft power organizations to mobilize the protests that eventually toppled the late Serbian President Slobodan Milosevic.

CANVAS has been funded largely through the National Endowment for Democracy, a CIA cut-out that functions as the US government’s main arm of promoting regime change.  According to leaked internal emails from Stratfor, an intelligence firm known as the “shadow CIA,” CANVAS “may have also received CIA funding and training during the 1999/2000 anti-Milosevic struggle.”

A leaked email from a Stratfor staffer noted that after they ousted Milosevic, “the kids who ran OTPOR grew up, got suits and designed CANVAS… or in other words a ‘export-a-revolution’ group that sowed the seeds for a NUMBER of color revolutions. They are still hooked into U.S. funding and basically go around the world trying to topple dictators and autocratic governments (ones that U.S. does not like ;).”

In September 2010, as Venezuela headed for a parliamentary election, CANVAS produced a series of memos outlining the plans they had hatched with “non-formal actors” like Guaido and his cadre of student activists to bring down Chavez. “This is the first opportunity for the opposition to get back into a position of power,” Popovic wrote at the time.

In his memo on electricity outages, Popovic highlighted the importance of the Venezuelan military in achieving regime change. “Alliances with the military could be critical because in such a situation of massive public unrest and rejection of the presidency,” the CANVAS founder wrote, “malcontent sectors of the military will likely decide to intervene, but only if they believe they have sufficient support.”

While the scenario Popovic envisioned failed to materialize in 2010, it perfectly describes the situation gripping Venezuela today as an opposition leader cultivated by CANVAS seeks to spin the crisis against Maduro while calling on the military to break ranks.

Since the Grayzone exposed the deep ties between CANVAS and Guaido’s Popular Will party, Popovic has attempted to publicly distance himself from his record of training Venezuela’s opposition.

Today, however, Popovic’s 2010 memo on exploiting electricity outages reads like a blueprint for the strategy that Guaido and his patrons in Washington have actively implemented. Whether or not the blackout is the result of external sabotage, it represents the “watershed event” that CANVAS has prepared its Venezuelan cadres for.

Max Blumenthal is an award-winning journalist and the author of several books, including best-selling Republican Gomorrah, Goliath, The Fifty One Day War, and The Management of Savagery. He has produced print articles for an array of publications, many video reports, and several documentaries, including Killing Gaza. Blumenthal founded The Grayzone in 2015 to shine a journalistic light on America’s state of perpetual war and its dangerous domestic repercussions.