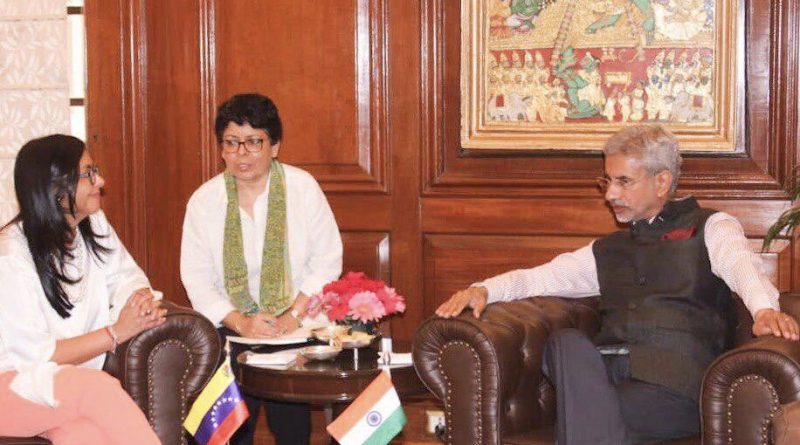 The Executive Vice President of the Bolivarian Republic of Venezuela, Delcy Rodríguez, held a meeting with Indian Foreign Minister Subrahmantam Jaishankar on Wednesday as part of her official visit to the Asian country with a view to deepening peace diplomacy and strengthening cooperation with that country.

Through her twitter account @DrodriguezVen, she indicated that Venezuela will participate in the 2nd Assembly of the International Solar Alliance, in addition to consolidating friendship and brotherhood ties with India, “who represents a world power for the sake of a pluripolar world and equilibrium”.

The vice president arrived last Tuesday to the nation of Mahatma Gandhi, in the company of the Minister of Economy and Finance, Simón Zerpa, to develop an extensive binational agenda that proposes to strengthen ties of brotherhood, cooperation and fraternity in favor of multilateralism.

During the meeting with the Indian Foreign Minister, Rodríguez delivered a congratulatory letter from the President of the Bolivarian Republic of Venezuela, Nicolás Maduro, to the Prime Minister, Narendra Modi, for the Diwali, which celebrates the victory of the Light against the darkness and in which he sends his best wishes to the brother people of India.

RELATED CONTENT: Pakistan Denies India’s Modi Use of its Airspace as Kashmir Issue Heats Up

The Republic of India and Venezuela have advanced in various fields of cooperation in the areas of energy, oil, education, culture, technology, commerce and health, promoting the south-south cooperation promoted by President Hugo Chávez, and so far continues to be boosted by the Venezuelan Head of State, Nicolás Maduro.

It was the leader of the Bolivarian Revolution, when he came to power in 1998, who said: “I embrace India as my own country and said we go to south-south cooperation and we thus see to the north and also we see to the south, and so expanding and consolidating, relations between both peoples have been developed.”

The commitment of the Venezuelan Government is to continue advancing in relations of mutual respect, of shared benefits, where international law is what governs the development of cooperation and friendship.