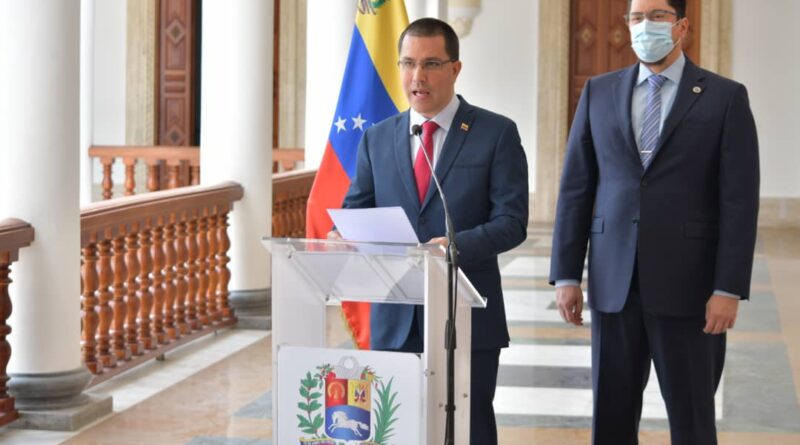 The Foreign Affairs Minister of the Bolivarian Republic of Venezuela, Jorge Arreaza, described as a legal aberration the ruling of the Federal Court of the District of Delaware in the United States authorizing the illegal sale of the shares of CITGO, the main subsidiary of the state company Petróleos de Venezuela (PDVSA) in the North American country.

“The Attorney General of the Republic has been prevented along with his team from exercising defense in the courts of the United States; had they been allowed to do so, this legal aberration would not have occurred,” announced the head of Venezuelan diplomacy this Saturday from Casa Amarilla in Caracas while reading a communique on the illegitimate decision.

In this sense, he asserted that this “procedural fraud” intends to take away from the people of Venezuela the main asset they have abroad to receive income from oil production, refining and marketing.

He noted that the illegal appropriation of CITGO has been forged under the instructions of former deputy Juan Guaidó and executed by Mr. José Ignacio Hernández, both fugitives from Venezuelan justice system.

“Venezuela denounces and rejects the actions of the Government of Donald Trump, in complicity with Venezuelan extremists, who have committed transnational crimes in order to appropriate the assets of the country and its entities throughout the world,” he said.

He also alerted the international community of the danger that this ruling represents for US foreign investments and companies, in the face of maneuvers aimed at confiscating foreign private assets through procedural fraud.

Likewise, he indicated that Venezuela will continue to defend its interests abroad for the good of all Venezuelans.

Below is the official translation of the communique:

The Bolivarian Republic of Venezuela denounces and firmly rejects the actions of the Government of Donald Trump, in complicity with a redoubt of Venezuelan extremists who, acting in collusion, have committed transnational crimes aimed at appropriating the assets of Venezuela and its entities worldwide.

In another step of the intricate corruption scheme underway, yesterday the Federal Court for the Delaware District of the United States of America, decided to begin the preparatory phases for the sale of the shares of the company PDV Holding, owner of CITGO, with the alleged purpose of forcefully executing an arbitration issued against Venezuela by an ICSID Court in 2016, which has nothing to do with PDVSA, Citgo Holding, Inc. and Cito Petroleum Corporation (CITGO).

This sentence, in the agonizing hours of the outgoing government of Donald Trump, confirms that the international relations of this administration are driven by hatred, plunder, vengeance, and the abuse of power as criminal exercise of public power. It is the distribution of the spoils at the last minute of that government with the complicity of its failed local puppet, to accentuate revenge against a company that belongs to all Venezuelans.

As the highest authorities of the Venezuelan Government have timely warned, the illegitimate and illegal appropriation of Citgo has been forged under the instructions of former deputy Juan Guaidó and executed by Mr. José Ignacio Hernández, fugitives from Venezuelan justice for having conceived an anti-legal framework to appropriate the assets of the Republic abroad, facilitate the delivery of the patrimony of the Venezuelan people to foreign powers through a gigantic procedural fraud, and attempt against the Venezuelan constitutional order.

It is of public knowledge that the person who acted as a false prosecutor in the trials that the Republic brings before international judicial bodies, had and still has economic ties with the Plaintiff, Crystallex International Corp. (Crystallex), and other transnational plaintiffs, also deliberately acted with absolute clumsiness and lack of skill, vulgarly usurping public functions before the U.S. justice system, invoking a supposed representation that never held in order to deliver the legitimate interests of Venezuela.

The only purpose of these actions was to provide a legal veil to the criminal surrender of the patrimony of all Venezuelans to the Government of Donald Trump, to a group of businessmen related to him, and to the Venezuelan extremists who lend themselves to commit the most severe aggressions ever known against the Republic.

The action of the U.S. judge, Stark, is so hostile to Venezuela that he suggests other creditors, who were not parties to the lawsuit in his charge, to come forward to participate in the fight he has declared on the actions of Citgo.

We alert the world that this legal operation has not only been encouraged by the Government of Donald Trump, but that the legitimate representatives of Venezuela have been prevented from duly, integrally and affectively defending the patrimonial assets of the Bolivarian Republic of Venezuela and PDVSA, through the imposition of unilateral coercive measures.

Finally, we alert the international community of the danger it represents for foreign investments and companies in the United States of America, and the severe risk to which their interests are subject in the face of maneuvers of this nature, aimed at confiscating foreign private assets through big procedural frauds and unilateral actions in violation of International Law.

The Bolivarian Republic of Venezuela will never renounce to the defense of its rights and interests in the corresponding instances, for the sake of preserving the patrimony whose only owner is the Venezuelan people.