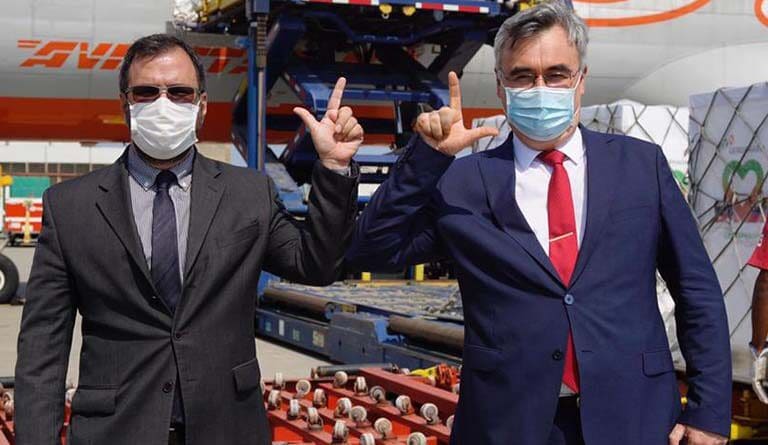 This Friday, April 16, Venezuela received the seventh shipment of insulin, containing 877,000 vials of the preparation, from Russia within the framework of the bilateral cooperation agreements between the two nations. The drug, produced by the Russian pharmaceutical company GEROFARM, arrived at the Simón Bolívar International Airport located in Maiquetía, La Guaira state.

This information was released by the Venezuelan Deputy Minister for Europe, Yván Gil, who received the shipment at the airport accompanied by the Russian Ambassador to Venezuela, Sergey Melik-Bagdasarov.

Gil indicated through a post on Twitter that he was glad of the new shipment as it helps to get around the unilateral coercive measures imposed by the United States that make the purchase of medicine, food and other necessities through conventional channels extremely difficult. “Thanks to the cooperation of the Russian Federation, the work of the High-Level Intergovernmental Commission, we will be able to safeguard the health of all Venezuelans,” wrote the Venezuelan official on his Twitter account @Yvangil.

He explained that with this new shipment, 77% of the amount agreed between the two countries has been fulfilled. “More than 4.2 million vials have arrived in the country, which have been applied to the Venezuelans who need insulin,” he informed.

For his part, Sergey Melik-Bagdasarov, Ambassador of the Russian Federation to the Bolivarian Republic of Venezuela, expressed his pleasure at the arrival of the medical shipment to Venezuela. “Long live solidarity and cooperation! Down with US coercive measures!” he said.

The alliance between Venezuela and Russia, forged at the International Economic Forum of Saint Petersburg, has immensely benefited the Venezuelan people. At that meeting the two countries agreed on the acquisition by Venezuela of five types of insulin to satisfy the national demand for all diabetic patients for whom insulin is a life-saving drug.

The Russian-Venezuelan alliance has strengthened over the years 2019-2020. An important result of this agreement has been the possibility of fabrication of insulin in Venezuela.