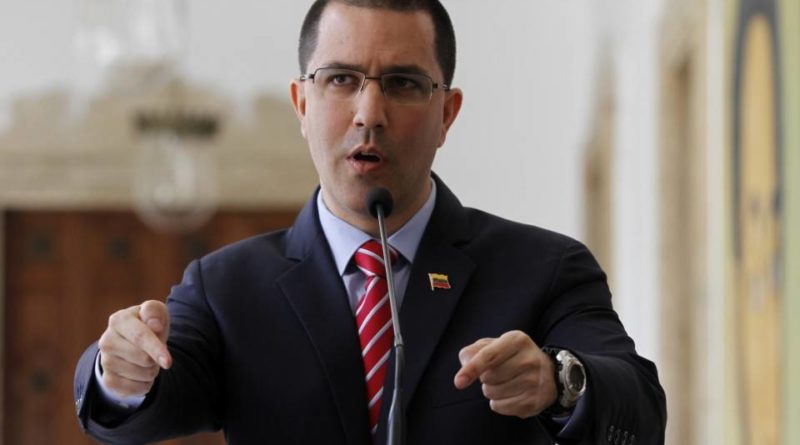 The Venezuelan Foreign Ministry issued a communique on Thursday in which it “categorically rejects” the “cynical statement” of the United States, under the administration of Donald Trump, which classifies Venezuela “as a State that does not cooperate in the fight against terrorism.”

In the text, shared on twitter by Foreign Minister Jorge Arreaza, the US move is criticized, coming just a few days after the South American country suffered “an attempted armed incursion for terrorist purposes, which included the participation of mercenaries and US mercenary firms.”

COMMUNIQUE | Venezuela rejects Trump administration claims, trying to portray the Venezuelan government as “non-cooperating in anti-terrorist fight” after being victim of an armed terrorist incursión directed by the US government https://t.co/m0lG1Yshwe

On May 13, the US State Department published a list of countries that, according to them, do not cooperate with the fight against terrorism. In this list Venezuela appears, along with Cuba, Syria, Iran and North Korea.

According to the document, Venezuela was included because in 2019 President Nicolás Maduro and his officials allegedly “continued to provide permissive environments for terrorists in the region to maintain their presence,” including alleged dissidents of the Revolutionary Armed Forces of Colombia (FARC) and members of the National Liberation Army (ELN).

In addition, it indicates that Maduro has been criminally accused by the United States of carrying out drug trafficking activities, allegedly with the FARC, for the last 20 years.

The US firm
In the statement, the government of Venezuela indicated that Washington has repeatedly shown its contempt for international terrorism law, “by providing refuge to terrorists, refusing to implement mutual assistance agreements in criminal matters, violating the principle of extradition or trial to those accused of terrorism and providing financial, logistical and training support to those guilty of these crimes.”

For this reason, Caracas pointed out that the United States is “the main sponsor of terrorism in the world.”

“It is no secret to anyone that the emergence and action of terrorist groups in the Middle East have the original signature of US intelligence agencies,” he says.

In this sense, the Venezuelan government indicated that ideologizing anti-terrorist cooperation “is nothing more than a strategy of aggression.”

Operation Gideon
This US move against Venezuela comes just 10 days after Caracas denounced a plan developed by “an extremist sector of the Venezuelan opposition,” led by deputy Juan Guaidó, through a contract signed with the ex-green beret and owner of Silvercorp USA contractor, Jordan Goudreau, to carry out a failed maritime terrorist incursion into Venezuelan territory, with the objective of allegedly overthrowing and assassinating President Maduro.

This same Wednesday, May 13, when Washington updated its blacklist, the Venezuelan ambassador to the United Nations (UN), Samuel Moncada, brought the case before the agency’s Security Council.

There, he pointed out that Colombia and the United States organized, trained, financed and protected “armed groups of mercenaries and terrorists”, involved in that failed raid.

Below the full official translation of the communique:

Venezuela rejects cynical US signal regarding fight against terrorism
The Government of the Bolivarian Republic of Venezuela categorically rejects the cynical accusation of Donald Trump’s supremacist government, by pretending to label Venezuela as a State that does not cooperate in the fight against terrorism, just days after having suffered an armed incursion for terrorist purposes, which included the participation of American mercenaries and companies.

Washington has repeatedly demonstrated its contempt for international law on terrorism. Faced with the disbelief of the world and even of its own Congress, the United States intends to hide its permanent non-compliance and violation of resolutions of the Security Council and the United Nations General Assembly, by providing refuge to terrorists, refusing to implement mutual assistance agreements in criminal matters, violate the principle of extradition or trial to those accused of terrorism and provide financial, logistical and training support to those guilty of these crimes.

It cannot claim to evaluate, much less certify the conduct of a country in this delicate matter, as the main sponsor of terrorism in the world. It is no secret to anyone that the emergence and actions of terrorist groups in the Middle East has the original signature of the United States intelligence agencies.

Ideologizing anti-terrorist cooperation is nothing more than a flight forward and a strategy of aggression towards independent countries, which believe in Peace. Venezuela hopes that the United Nations Security Council and the International Criminal Court will rigorously investigate the role Washington has played in promoting terrorist practices, establishing responsibilities and making the most elementary principles of international law prevail.