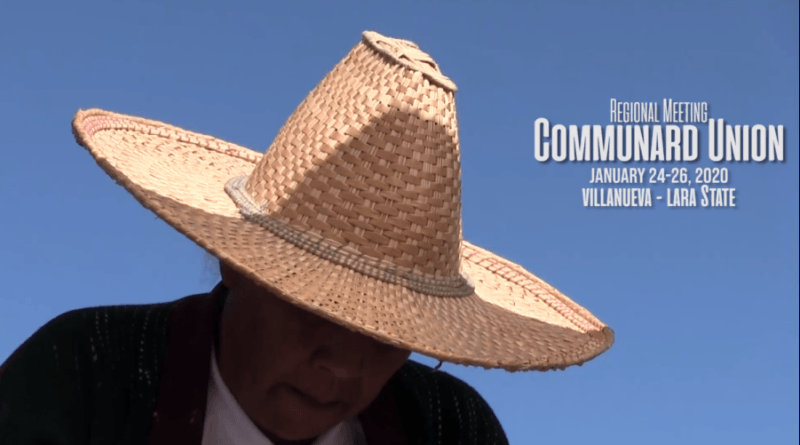 Dozens of communes from across the country are uniting to form a “large national political movement.”

The center-west regional meeting of the Communard Union (Unión Comunera) took place on January 24 to 26 in Las Lomas farmstead, Villanueva, Morán Municipality, Lara State. The event was attended by some 300 people from 60 communes. They came from the heavily agricultural states of Lara, Portuguesa, Yaracuy, Cojedes and Apure.

The regional meeting will be followed by four others in the Llanos, Andes, Capital, and Eastern regions ahead of the upcoming national congress to officially launch the Communard Union.

The Communard Union is an initiative spearheaded by several communes in recent months, with the goal of bringing together popular power experiences across Venezuela.

“The Communard Union aims to become a large national political movement, a space that will link the struggles of the Chavista people for the definitive construction of socialism,” reads the guideline document of the center-west meeting.

In the opening session, Ángel Prado, spokesman of El Maizal Commune, proclaimed the Communard Union’s firmly Chavista identity. He pointed out that the goal is not to oppose the government. Instead, popular power needs to push forward and establish its own “great pole” in Venezuelan society.

“Let’s go where the people are fighting, to the catacombs,” he said, defending the idea that communes need to continue taking over unproductive land and means of production.

Interviewed by Venezuelanalysis, Prado insisted that communards have a “great historical responsibility” in the current context.

“[The Communard Union] brings together popular, grassroots Chavismo, part of this Chavista reserve that refuses to leave the country, refuses to kneel before the oligarchy and before reformism,” he explained.

“How do we manage to move forward in a context of setbacks?” he asked, arguing that in the current crisis and under pressure from US sanctions, the Venezuelan government has moved backward on economic policy.

Turning to popular movements, Iturriza reiterated the urgency of accumulating strength in order to advance, building alliances so as to have a “political influence.”

Speaking to Venezuelanalysis, he also stressed the “self-managed” character of the event. “We need to take back the initiative, and for a space like the Communard Union, which is under construction. I think it is very important to highlight its autonomous character,” he said while labelling the effort to build political alliances as “very important.”

In the second day of the meeting, participants were split into different workgroups. In the morning session, they debated the internal structure of the Communard Union, its working dynamics, its values and principles, its symbols, among other aspects.

In the afternoon the discussion split among the four Communard Union priority areas: production and economy, communications, education, and security.

The meeting closed with a cultural event on Saturday night, with songs by the “Maizalitos” (boys and girls from El Maizal Commune) and a Tamunangue (local music style from Lara) presentation by local musicians.

Willy Romero, spokeswoman from El Maizal Commune, told Venezuelanalysis that the organizers were “very happy” with the meeting.” She added, “we are convinced that Venezuelan communards are going to achieve more and more victories.”

RELATED CONTET: Battling with Beans and Rice: Food Sovereignty as a Defense Against US Imperialism – Venezuelan Comunero in Nicaragua (Interview)

Choosing Las Lomas farmstead to host the meeting had, according to the organizers, the goal of supporting the ongoing struggle in that territory.

Carlos Terán of the Sectores Unidos de Villanueva Commune, told Venezuelanalysis that the 186-hectare plot, formerly owned by the Venezuelan Coffee Corporation, was completely abandoned and about to be handed over to a coffee businessman before communards occupied it over in 2019. Since then, the members of four local communes have cleared the terrain and are now growing coffee, corn, beans, and other foodstuffs.

The communards’ actions have met a tough response from authorities. Several were detained for 42 days until a solidarity campaign managed to get them released. Additionally, in September 2019, the National Bolivarian Police’s special forces unit (FAES) attempted to evict them from the property.

Campesino and communard movements around the country have decried repeated attacks from landowners in recent months, frequently with the alleged complicity of state security forces and in violation of Venezuela’s Land Law. In response to the violence, the Communard Union document proposes “overcoming the private property model with social property” while increasing the amount of “productive units under communal control.