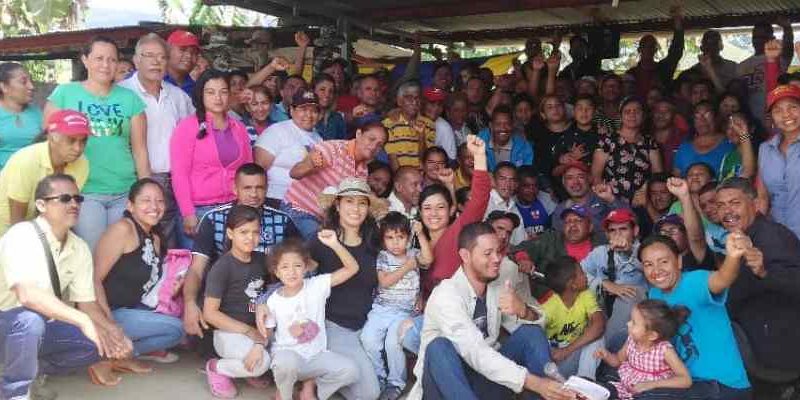 By the Communication Commission of the Communal Union – January 27, 2020

The town of Villanueva, in the mountains of Lara, received hundreds of vocerxs in the old FUDECO farm recovered by the United Sectors Commune to constitute the Algeria Laya Collective Production Unit, where the Central Union Western Union Convening was held, a space being pieced together little by little, with the firm intention of becoming a national organization whose objective is to promote the construction of Bolivarian, Chavista and Indo-American Socialism, starting with the consolidation of the Commune as a strategy to territorialize politics, and to integrate with the Venezuelan popular movement. Months of process precede this first meeting, exchanges between communes, meetings, training spaces together, a permanent sharing that was born from an assembly in the El Maizal Commune and that has a route to build the necessary base to promote a national communal organization. Soon other regional meetings will be held: Andes, Llanos, Central, Oriente, and from there to convene the national congress to be held on March 5 to finish defining the work plan of those who fight for the commune, for the Communal road to Socialism, for the revolutionary project of Comandante Chávez.

Between struggles and mountains

On Friday, January 24, the meeting began with hundreds of comunerxs singing the National anthem, the Federation anthem, the International and the Commune or Nothing! loudly, loud voices evoked Comandante Chávez between singing and slogans, between presentation and words of welcome, with the strength of the Chavista people who struggle daily to build a socialist option in response to the crisis, that was how the first day of the Centrocciodental Convening of the Communal Union developed. Present were more than 280 comunerxs, from at least 45 communes and social organizations from Falcón, Yaracuy, Portuguesa, Trujillo and Lara states, also present various social organizations and militants of the Landless Movement of Brazil and CANPO of Argentina, and even with guests from Apure, Mérida and Caracas, who will have the task of organizing the next regional meetings, heading to the National Foundational Congress, which will be the body that will decide the fundamentals of this lengthy building process that brings together hundreds of experiences for the strengthening of the Communal Union.

The welcome was made by speakers of the United Sectors Commune of Villanueva, composed of 8 communal councils and those who took the land (186 Has), on January 29, 2019. It is the old Finca Las Lomas, abandoned by the State Venezuelan, represented by the Venezuelan Coffee Corporation and which is now managed by 174 families, who have been recovering part of the coffee and macadamia nut plantation, the main crops of the current Algeria Laya Production Unit. Since the recovery by the commune, the sowings, the conucos have multiplied and a production plan is being outlined that accompanies the demand that the national government transfer it to the popular power.

It is not by chance that the meeting is held here, it is a sign of our solidarity and support for the demand of formal delivery to the commune, which has resisted the attempted eviction by force of the State security forces, some have been imprisoned for more than 60 days, but there they are firm, neither the landowners, nor the corrupt state officials have been able [to remove them] nor will they be able to, because they are not alone: the comunerxs are united in their defense.

During the initial day Jesús Silva of the Patriotic Force Alexis Vive and Luisimar López of the El Maizal Commune, were responsible for carrying out the start-up tasks on time, informing [participants] about the program of the event, confirming the objectives set, informing about the contributions of all the participants to be able to self-manage it and giving way to the key speakers proposed.

Thus began the intervention on the current situation and the challenges in the communal field by Reinaldo Iturriza, who made a synthesis of the path of the communes, their power and limitations, in addition to the tasks that must be assumed in the current context to ensure no only its subsistence but also its contribution to overcoming the crisis from the [principles] raised by Chavez, the communal road to socialism, emphasizing the necessary articulation and accumulation of popular force to assume what is necessary to move forward.

With the context and challenges posed, the intervention of Ángel Prado of the El Maizal Commune was added, who gave an evaluation of these months, stating in his speech: “Here there is a popular party, a Chavista party… we are going to to organize ourselves, we are working very seriously to implement the necessary organic goals, which we will assume with a rebellious spirit, adding people who want to fight, recovering land, founding production units … those who are struggling to build the legacy of Commander Chavez … we are about to realize 6 regional meetings and then close with the National Foundational Congress in honor of the Commander, to revive his spirit with organization, this is how this great national organization will be born, the Communal Union, which is mandated to build a pole of power, production, training, for the president to keep in mind that as he meets with bankers, businessmen, with the great patriotic pole, he must also meet with us, the comunerxs who raise the “Commune or nothing” flag, from the communal road to socialism”.

Agreeing on contributions for the National Congress

On Saturday, January 25, the second day of the meeting, working tables were developed in the morning to dream up the necessary organization, supplies for organizing the Communal Union and in the afternoon thematic tables were formed: Communication, Training, Economy and Communal Production, Security and Defense, Women and Youth; there lines of work were drawn that we have always promoted in accordance with the policies promoted by the revolutionary government and to which we have added our contribution from the autonomy of the popular movement of which we are part. The contributions of the tables were presented in two plenary sessions, the first one held on Saturday night with the synthesis by table of the discussion on the Communal Union, the second on Sunday morning with contributions on the thematic axes.

At the end of Saturday, the Communal Night was held, the popular festival that was expressed in high spirits, with song and dance of the people, which in Guaras lands (Lara state) has a clear name: the Sones de Negros, the Tamunangue, also an expression of resistance and memory which gives us the club of battle to continue the fight. There were various cultural expressions that accompany the people in these hard times, in which joy is exchanged between comunerxs, celebrating the meeting, agreeing to follow the path of Chavez together.

RELATED CONTENT: Democratize the Land, Empower the People: A Conversation with Zuleima Vergel

On Sunday, in addition to the speeches of the remaining tables, several interventions by participants were presented, valuing the importance of the space, the necessary effort to build unity, in addition to building the permanent exchange between the communal production units that are struggling to stay standing, also with a speech by Carlos David Vargas of the Commune Angel María Colmenarez and the Patriotic Force Alexis Vive expressing the next tasks for the Communal Union and the clear signs of identity shared by those in attendence that will allow the continuity of the plan. With the force that guarantees the encounter of equals, that promote common policies, the transit for the conformation of the Communal Union begins, the territory that witnessed the struggle of Commander Argimiro Gabaldón today also sheltered those who continue that legacy, which together with the thought and action of Comandante Chávez, leads us to the construction of an organization that seeks to articulate territorial processes that are evidence the communal spirit continues in combat to sustain and deepen the Bolivarian Revolution.

We are the Communes or nothing!