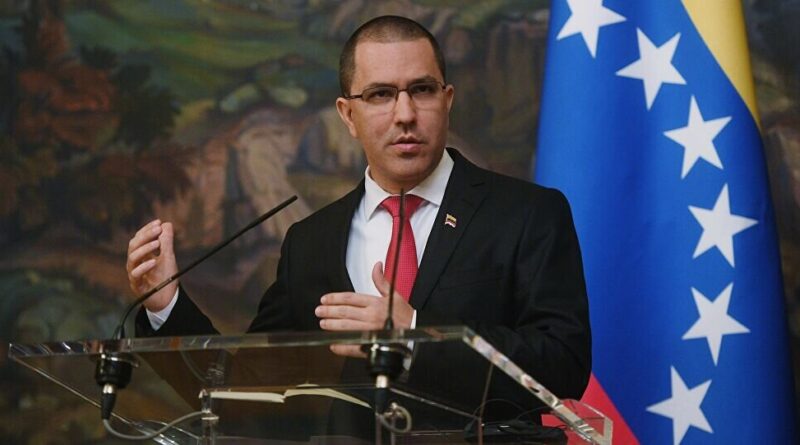 The August 20 Zoom conference with Venezuelan Foreign Minister of People’s Power Jorge Arreaza, featured, among other issues, his devastating analysis of the Trudeau government’s interference in Venezuela’s internal affairs on behalf of Trump. Any justice-loving Canadian listening may think that Simon Bolívar, the 19th-century Venezuelan independence hero had it right. He famously said: “The United States appears to be destined by Providence to plague America with misery in the name of liberty.” However, we may now add Canada under Justin Trudeau along with the U.S.; Canadians imbued with a sense of the principles of sovereignty, not to mention international law, need to recognize it.

At one point in the lengthy conference, Arreaza, asked:

“Why was Canada following the steps of the United States? Why was Canada even taking the blows, to say things that the United States, because of the very bad reputation they have in Latin American countries, couldn’t say? So, Canada began to be in the frontlines of the aggression against Venezuela. And we had really no idea what would happen.

Why Canada? We always saw Canada as a bridge, as an actor with whom we could establish dialogue and search for dialogue with the United States and even other parts of the world. But it was not the case, and [Canada] always using the framework of the defence of human rights. So, you know that the prime minister of Canada, Mr. Trudeau has had, … and he is nothing like his father I must say, and he has had some differences with the Trump administration, especially climate change, trade agreements, etc. And …., so Venezuela was an easy card to agree upon, so that’s what they did. They said, okay, we have these fights, but let’s agree about Venezuela. We will do what you can’t do. Let us organize the Lima group. It won’t be you directly, Mr. Pompeo. It’s going to be Chrystia [Freeland], it’s going to be Trudeau. It’s going to be easier if we do it this way, because if the United States is a member of the Lima group, no one is going to give any credibility to this group, because they will believe that it is the United States with its regime change policy trying to attack Venezuela.

And, … there is a second reason or motivation that produces this aggression from Canada against Venezuela. It is related to the oil interests, these big companies in Alberta, this province of Canada where you produce heavy oil just like Venezuelan oil, heavy oil, and your refineries, especially in the south of the United States, in Texas, in Florida and other parts, are designed for the Venezuelan oil, for heavy oil. Because traditionally it was Venezuela that supplied this petroleum, this oil to the refineries. And now, because of this aggression against Venezuela, because of these sanctions against Venezuela, the oil from Canada is substituting for the oil from Venezuela.

There was a clear motivation, but there was also some interest from some companies, like Crystallex, which was a mining company in Venezuela, which was like a fake company, which never existed, really, because, its name is Crystallex [gold], because it was created for a region in Venezuela which had important goldmines called cristinas, so it was Crystallex. […] But, at some point, President Chávez decided to nationalize all the gold industries, and these companies were asked to leave Venezuela. So, they went to an arbitration process and suddenly, during these last years, we lost this arbitration process and that money that the public of Venezuela, the Bolivarian Republic of Venezuela owes, has to pay to this Crystallex so-called company.

But it is related to Canada, it’s Canadian and they have links with this member of parliament, Juan Guaidó. I must say that nobody knew Juan Guaidó before he raised his hand in the middle of a demonstration in the street and self-proclaimed as president of our country, and many Venezuelans have forgotten his name. … So, all this business interest came into this new chess game and Canada was in the vanguard of this aggression against Venezuela.

We must remember that this Lima group was created because the United States didn’t manage to have all the votes they needed in the OAS, the Organization of American States, to expel Venezuela or apply the Democratic Charter of the Americas and intervene in Venezuela, especially because they couldn’t convince the ALBA countries and the countries of the CARICOM, the Caribbean nations. They never had the 24 votes they needed, they even didn’t have the 18 votes at the beginning. So, they created this Lima group, which is an informal group. It is not legal, it is not registered in any international organization and it meets to attack Venezuela. And usually the chair of this group is Peru, usually, but that’s formal. The real orders and instructions are given by Canada, but especially from the U.S., from Washington to Canada to the Lima group. And in one of the last meetings they had, they even connected with video conferences with Pompeo. The United States is not a member of the group, and Pompeo tells them what to do.”

In a first meeting with Elliot Abrams (Trump’s special envoy for Venezuela) at the UN, Arreaza recalled that he told him that, in reference to all the plans and predictions to overthrow Maduro, that they will not come to fruition. Arreaza pointed out:

“Well, after that [first meeting] we met and I told him, you see, Mr. Abrams, that nothing happened, that our military is respecting our Constitution and our government and your coup d’état has failed. And he said, ‘Okay, if it failed, I must accept it, at least for now. But next, we are going to apply a maximum pressure strategy. And we have a lot of allies.’ And on his list, Canada was always the first one.”

RELATED CONTENT: Trudeau Should Withdraw From the Lima Group, Rescind Sanctions on Venezuela

However, despite the cruel and cynical support of the Trudeau government for the Trump/Pompeo regime change sanctions and attempted coup d’états, Arreaza extended an olive branch:

“And I want to share with you [the Canadian public], I insist, if Mr. Champagne, the Minister of Foreign Affairs of Canada, wants to have a conversation with the Minister of Foreign Affairs of the Bolivarian Republic of Venezuela, I can call him, and we can have a telephone phone call right now. If he wants to meet with me in Ottawa, in Caracas, in Mexico City, in Beijing or whatever, I can travel. Whenever you want, because we believe that we should respect Canada and Canada should respect Venezuela and not interfere in Venezuelan internal affairs.”

Again, in the context of the question and answer period from journalists, this one relating to the plans for another U.S.-led military intervention, Arreaza reiterated:

“Maybe they [Canadian government officials] can listen to this [conference]. I am so sure that, I don’t know if the Minister, but people from the Ministry of Foreign Affairs of Canada are listening to this conference, to this exchange, and they are taking notes, hopefully they rectify themselves, and they will never support, not now or in the future, a military operation against Venezuela.”

There has been no word from the Canadian government. However, on August 21, an article was published in the National Post by one of the journalists that attended the conference. Quoting extensively from Guaidó’s fake ambassador, it makes essentially two points:

The economic hardships afflicting Venezuela are the fault of the Maduro government and not U.S./Canadian sanctions.

Canada and the Lima group exist to save Venezuela from a “humanitarian disaster,” “human rights violations” and carry through a “democratic transition.”

In a follow-up article published on August 26 in the National Post the same journalist, rather than taking into account the objections raised on social media (and a letter sent to him by the author of these lines to rectify some facts) went even further. He more forcefully continued to portray the Trudeau government and the Lima group as a force for “peaceful transition to democracy in Venezuela.”

In the meantime, indications are that a military invasion of Venezuela is being organized now by the U.S. and its allies for October, just before the November 4 Presidential elections. Why are the Trudeau government and Canadian media ignoring this?

In the light of this colossal breach of international law, can Canadians remain silent? On the contrary, members of parliament, trade unions, political organizations and intellectuals in Canada and throughout the world must speak out now!

See the full Foreign Minister Jorge Arreaza Conference and discussion that took place on August 20, here thanks to Canadian Dimension.