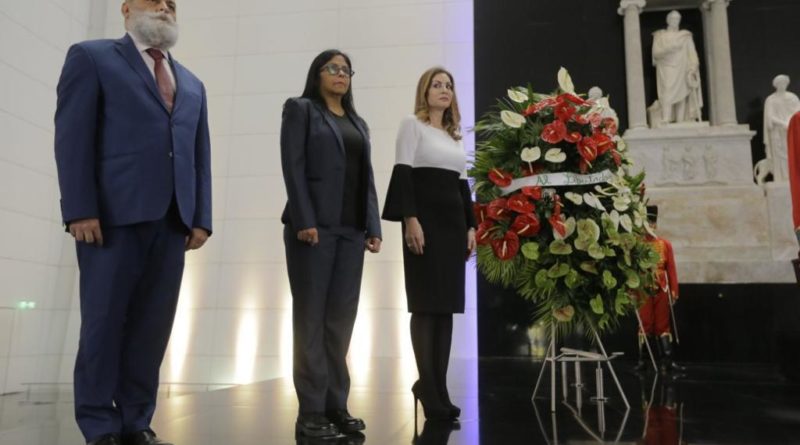 The Bolivarian government organized a farewell ceremony on the occasion of the cessation of functions of the Palestinian ambassador to Venezuela, Linda Sobeh Ali, who served in the position since 2012.

In the event that took place this Tuesday, in the Mausoleum of the Liberator, Simón Bolívar, Caracas, the Executive Vice President of the Republic, Delcy Rodríguez, participated with the Vice Minister on Foreign Affairs for Asia, the Middle East and Oceania, Rubén Molina. With regard to the cessation of functions of the Palestinian diplomat, this Monday the constitutional president, Nicolás Maduro Moros, delivered the order of Francisco de Miranda for her outstanding work in the nation for eight years.

In addition, he was also awarded her with a replica of the sword of Liberator Simón Bolívar, as a symbol of brotherhood among governments fighting for the freedom of the peoples.

Linda Sobeh Ali expressed her admiration for Venezuela and has reiterated that she will return to her country to continue working for the freedom of her people and Venezuelans. Venezuela and Palestine have, since the arrival of the Bolivarian Revolution, strengthened their bilateral relations, establishing agreements since 2009 with Commander Hugo Chávez, that continue today with President Maduro, developing cooperation in areas such as education, economy, commerce, energy, agriculture, culture, tourism, communications, sports, defense and police security, and health.

According to Article 1 of the Montevideo Convention on the Duties and Rights of the States of 1933 and the Declaratory Doctrine, Palestine complies with the international legal requirements to qualify as a Nation-State.