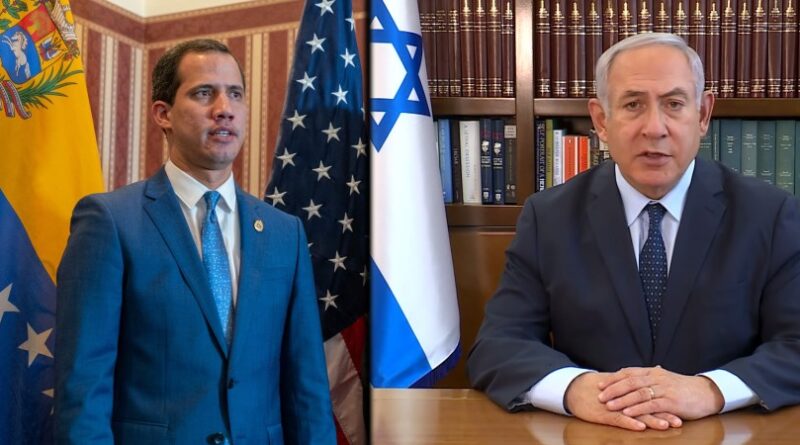 The US-backed Venezuelan coup regime of Juan Guaidó is reestablishing ties with Israel and has opened a “virtual embassy” in Jerusalem, run by a right-wing rabbi who lives in Miami and wants Netanyahu’s help to fight “terrorism.”

Venezuela’s late socialist President Hugo Chávez was a strong supporter of Palestinian rights who officially broke ties with Israel over its brutal war on the besieged Gaza Strip in 2009.

More than 11 years later, the coup regime of self-declared leader Juan Guaidó, whom the United States recognizes as the unelected president of Venezuela, is hoping to reestablish the country’s alliance with Israel.

On August 6, the coup regime announced the opening of a “virtual embassy” in Jerusalem. It launched an official website and said “this action is the first step toward the restoration of bilateral diplomatic relations between Venezuela and Israel.”

The man Guaidó recognized as ambassador is a staunchly pro-Israel, right-wing rabbi who has lived in the US for the past eight years. He has called on foreign countries to help bring about regime change in Venezuela, and also insists that Israel can help the opposition “rebuild Venezuela,” using its “counter-terrorism” tactics to purge the country of supposed armed Chavista elements.

In August 2019, Guaidó appointed Pynchas Brener as his envoy to Israel. Brener, who was born in Poland and later immigrated in Venezuela, previously served as the chief Ashkenazi rabbi of Caracas.

In a video back in 2017, Brener acknowledged that he had left Venezuela between five and six years before, sometime around 2011 or 2012. Since then, Brener has been living in Miami, Florida, the de facto capital of the Latin American right wing in exile.

Brener shares this in common with other supposed ambassadors of the Guaidó coup regime, who are elites who have spent much of their lives outside of Venezuela – such as British envoy Vanessa Neumann, a socialite heiress who has dual US citizenship and left Venezuela as a child.

This August 9, Guaidó’s new “virtual embassy” declared that “the opposition in Venezuela says it is ready to restores diplomatic relations with Israel.”

The virtual embassy linked to a Spanish translation of an article in the right-wing Israeli newspaper Israel Hayom, which quoted Brener and reported that Israel, which already recognizes Juan Guaidó, is expected to officially establish diplomatic relations soon.

On its official website, the new virtual embassy tells Venezuelans that if their passports have expired or need to be updated, they should contact the Venezuelan embassy in Jordan.

The Venezuelan coup regime’s virtual embassy in Israel mirrors the “virtual US embassy in Venezuela,” which doesn’t actually exist on the ground in the country, but recognizes Guaidó as its putative president.

This May, Brener held an interview with an Argentina-based pro-Israel radio station in which he stated that he was in the process of restoring diplomatic relations with the far-right government of Benjamin Netanyahu.

Brener said he and the Guaidó coup regime have been building relationships with Israeli companies and universities. He also insisted Israel could help a new Venezuelan right-wing regime purge Chavista elements with its “counter-terrorism” tactics.

“Israel and Venezuela can have a great relationship,” Brener effused. “Because, to rebuild Venezuela, where there are many different armed groups,” he continued, claiming there are paramilitaries, drug cartels, and Colombian guerrilla groups active in the country, “I believe that the experience that Israel has in its fight against terrorism will be invaluable for Venezuela in the future.”

In the radio interview, Brener did not mention Palestinians once. He did however demonize Iran, claiming “it wants to produce a nuclear bomb that would threaten the whole world.”

Mere days after the Donald Trump administration initiated its coup attempt in Venezuela on January 23, 2019, Juan Guaidó made it clear that he would do a total 180 on the Chavista government’s pro-Palestinian stance.

On January 27, Guaidó thanked Israel and Prime Minister Benjamin Netanyahu for recognizing him.

Guaidó’s new Venezuelan “virtual embassy” highlighted a meeting that Israel’s foreign minister, Gabi Ashkenazi, held in Jerusalem this August 6 with members of the Latin American and Caribbean Group (GRULAC). Diplomats from 16 South and Central American countries attended the meeting, and Ashkenazi called on them to vote in support of Israel in international institutions, pledging potential economic assistance in return.

In the meeting, Ashkenazi also condemned Iran and the Lebanese resistance group Hezbollah, claiming they are threatening South America with “terrorism.” As an example of these supposed terror activities, Ashkenazi cited the 1994 bombing of a Jewish community center in Buenos Aires, AMIA. However, recent revelations by a former police spy have cast doubts and instead suggested that the real culprits were fascistic anti-Semitic elements linked to the Argentine intelligence services and the former US-backed military dictatorship’s “dirty war.”

Venezuela’s virtual embassy additionally tried to blame the catastrophic explosion in Beirut on August 4 on Hezbollah, without a shred of evidence. The Lebanese government has said it was likely an accident caused by the detonation of thousands of tons of ammonium nitrate that were improperly stored next to the Beirut port.

From his luxury home in Miami, the Venezuelan coup regime’s ambassador to Israel, Pynchas Brener, actively publishes video rants to his YouTube channel. These provide candid insight into his ideology and political history.

In his videos, in both Spanish and English, Brener shows himself to be an anti-Chavista ideologue who uses religion to push right-wing clichés.

In March 2018, before the Trump administration initiated its coup attempt with Juan Guaidó, Brener published a video rant titled “No more tyranny,” in which he made a plea for foreign intervention to bring about regime change.

“Take a look at North Korea; take a look at Cuba; and now we see the same thing happening in Venezuela,” he argued. “It seems that by themselves they cannot change their regimes. You need somebody from outside; you need external forces to help them, because otherwise they’ll never come out of the terrible situation in which they find themselves.”

Brener also uses religious doctrine to push conservative principles like “There is no free lunch,” and ponders whether the Covid-19 pandemic is “divine punishment” by God.

In 2013, Brener took a trip to Israel and filmed a documentary for privately owned, anti-Chavista Venezuelan TV channel. Included in the broadcast, which he uploaded to YouTube, were fawning interviews with former Israeli Prime Minister Shimon Peres and ex-IDF spokesperson Nachman Shai.

During Israel’s punishing war on the besieged Gaza Strip in 2014, Brener published a video boasting, “We won for Israel! On the front lines of the media war.”

In 2015, Brener uploaded a bizarre video rant in which he insisted “THERE IS NO SOLUTION” (sic) in the Israel-Palestine conflict, because, in his mind, Palestinians are hate-filled, genocidal anti-Semitic fanatics who will never be happy until they wipe Israel off of the map.

In another 2015 video, Brener condemned the Barack Obama administration’s nuclear deal with Iran, which he called a “bad” deal. Fearmongering about Iran, which he compared to Adolf Hitler, Brener insisted Tehran wants to commit a new holocaust against Jews.

Subsequently, in 2016, Brener conducted an adulatory interview with the Israeli consul in Miami. Sitting in front of the US flag, Brener lamented Chavéz’s breaking of diplomatic relations with Israel. He also blamed the conflict in Israel-Palestine not on Zionist colonialism, but rather on “radical Islam.”

Brener insisted that Israel is “the voice of conscience for the world.”