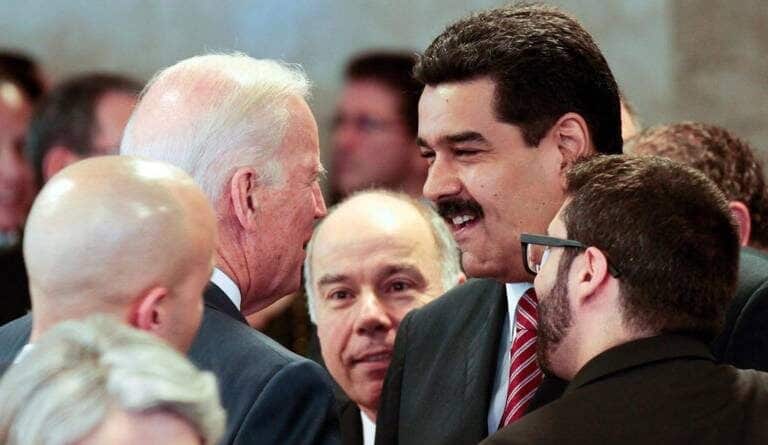 The Venezuelan president also mocked Guaido for not backing Trump’s claims to have won the US election.

Maduro also commended Vice President-elect Kamala Harris and the US people in general, while stating that he is willing to participate in “decent dialogue” based on “respect and cooperation” and come to “agreements” with the new US administration, which takes office on January 20, 2021.

His comments sparked speculation of potential improvement in the relations between the two countries. Washington and Caracas cut their limited diplomatic relations in 2019 when both countries closed their respective embassies and consulates.

Biden has, however, previously committed to “think about” meeting the Venezuelan president, despite sharing both Trump’s allegation that Maduro is a “pure and simple dictator” and the current administration’s recognition of self-declared “Interim President” Juan Guaido as Venezuela’s leader. Maduro and Biden last crossed paths in Brasilia, Brazil in 2016 at former President Dilma Rouseff’s inauguration.

During the four years of the Trump administration, bilateral relations between Venezuela and the US sharply deteriorated, largely due to the escalation of Washington’s unilateral coercive measures into a fully-fledged blockade. Experts have criticised the sanctions regime as “collective punishment” and argued it has caused tens of thousands of deaths. In March this year, Trump also placed a US $15 million bounty on Maduro’s head, and has frequently threatened to use military force to oust him.

While congratulating Biden, Maduro claimed that people power and US social movements have “woken up” since the homicide of George Floyd. “The Democratic Party didn’t win, Donald Trump lost it. Biden received the votes of hope from an immense majority of US citizens who want change,” he said.

For his part, Guaido, who was hosted by Trump in the White House in February, also congratulated Biden and called for “bipartisan support” for his regime change goals. Guaido’s message received widespread mockery and outrage on social media, with some supporters calling on him to back Trump’s claim to have won the election.

Maduro also added his voice to those highlighting the contradiction, stating“You [Trump] created a Frankenstein, a snake who betrayed you in five minutes despite the US $800 million you gave him.”

Despite promising to “reverse” many of Trump’s policies, Biden’s team has previously vouched to “push for stronger multilateral sanctions” against Venezuela “in an intelligent way” and “with specific goals.” Biden was influential in giving the sanctions regime its current form in 2015 as vice president during the Obama presidency.

He has also promised to immediately grant Temporary Protected Status (TPS) to tens of thousands of Venezuelans living illegally in the US.

Bolivia, Iran, China and San Vicente and the Grenadines

Besides congratulating Biden, Maduro also sent his warmest wishes to Bolivia’s President Luis Arce on Sunday ahead of his swearing-in ceremony.

Speaking from the ceremony, Venezuela’s Foreign Minister Jorge Arreaza affirmed that “Bolivia has achieved a miracle, it has rescued democracy and political power through a popular vote with the mobilisation of the people.”

On Monday, an Arreaza-led team also “retook” control of the Venezuelan embassy in La Paz. The building had been taken over by Guaido’s forces in Bolivia in June with the backing of the de facto government. Arce has promised to re-open diplomatic relations with the Maduro government.

Likewise, Maduro hosted important delegations from Iran and China last week as part of his efforts to strengthen strategic geopolitical alliances and restart the Venezuelan economy.

On Thursday, a high-level meeting was held in Caracas with Iran’s Foreign Minister Javad Zarif, with sanction-dodging cooperation and counter-pandemic actions on the agenda.

Following the meeting, Zarif told reporters that “Today the US and its allies cannot control the course of global events. They have lost control, western domination is over.”

Likewise, Maduro held a televised meeting with a handful of Chinese private businessmen on Friday to “construct new alliances to satisfy social and economic needs” and seek international investment.

During the encounter, Maduro highlighted the powers granted to his team under the recently passed Anti-blockade Law. While the government has touted the legislation as a powerful weapon against US measures, critics have claimed it rolls back many of the popular victories achieved under President Hugo Chavez and does little to combat the blockade.

Finally, Maduro congratulated his counterpart in Saint Vincent and the Grenadines on Sunday after a “historic and unprecedented” fifth electoral victory for the Unity Labour Party (ULP) and Prime Minister Ralph Gonsalves. The ULP, which has maintained close relations with Caracas, won 9 seats to the opposition’s 6 but trailed in the popular vote by one percent.