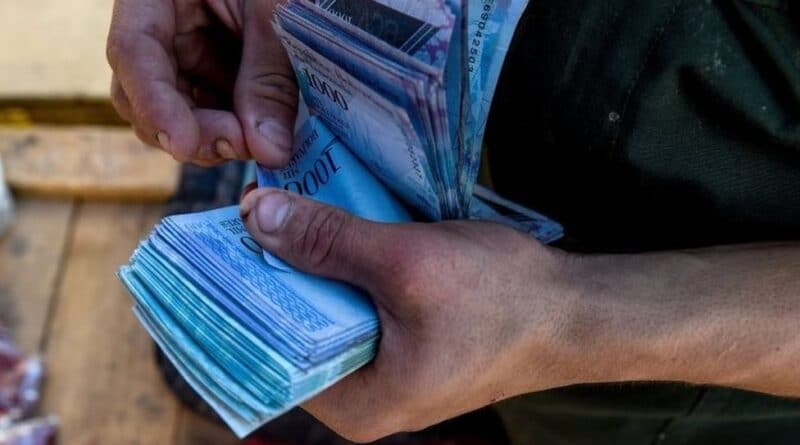 Some days ago the Central Bank of Venezuela announced that, from now until this time next year, banks will be able to discount and sell 30 billion bolivars (the Venezuelan currency) annually of that money which has been kept as a legal financial reserve. The goal, according to the bank, is to BA by means of bank credit, which is to say that they suppose that the banks are going to lend this money to their clients and the clients, in their turn, will use it for purposes of production. To give us an idea, 30 billion bolivars is equivalent to 15% of all the money that is currently circulating in the economy, in cash and bank deposits.

At first glance we could say that the Central Bank of Venezuela understood that the monetarist doctrine of reducing the quantity of money – a doctrine that it has been putting into practice since August of 2018 – has not only not controlled the hyperinflation, it has, in fact, contributed to a large decrease in national productivity.

Certainly, in the setting of a hyperinflation induced by the attack on the bolivar currency, it is necessary to increase the quantity of money to reactivate the economy, or, at least, to counteract its fall also caused by the political manipulation of this type of exchange. We have been talking and writing about this for some time now, since 2015. But the situation is that the recent decision of the Central Bank of Venezuela to increase the amount of money and the way in which they are carrying this out will not achieve a reactivation of the economy. We will explain.

The first question we must ask ourselves is – to whom will they be giving these credits? One would suppose that it would be to the private enterprises so that they could produce and the economy would respond. Do you really believe that these businesses will increase their production in the current situation, in which the buying power of the Venezuelan consumer has fallen 98% since August of 2018? People do not have anything to buy with. The producer of bananas or milk or tomatoes will not increase their production if there is no demand. Even if they wished to do so, they will not produce more than what they are producing now.

What will that businessman do? Invest in a more profitable business. With these bolivars, he will buy hard currency, especially with the expectation that between now and December 6, the exchange rate will rise sharply as a consequence of the imperialist attack. The historic pattern of the behavior of the illegal dollar.

Before continuing the analysis, it is necessary to clarify that this increase of the demand for hard currency, due to to the fact that financial and corporative capital will be able to have at their disposal 30 billion each week, will not be the cause of the future depreciation of the bolivar between now and the elections, as the monetarist economists have said. The exchange rate will continue to increase whether or not there are more bolivars in circulation, whether or not the weekly 30 billion are made available. Unless the enemy, for some unknown magical reason, drops their most powerful weapon during the actual electoral process.

The depreciation of the bolivar has been and will continue to be induced by imperialist attacks, as spokesmen for the U.S. have already confessed; among these spokesmen, we find the Republican Senator Richard Black. This is so much the case that from July 2018 to July 2020, according to the Central Bank of Venezuela, the true quantity of money fell 77% as a consequence of the monetarist policies, and, even so, the rate of illegal exchange did not pause, but on the contrary, increased 307,195% during the same period.

Continuing with the analysis, some would say that those 30 billion per week will be useful to increase the limits of credit cards and with this it will increase demand among the poor, stimulating production. And with what do they imagine that we are going to pay the credit card debt if our salary is not sufficient to meet it?

The other question that we should ask is – from whom will they be buying hard currency with all these bolivars? Will there be a new auction by the Central Bank of Venezuela like the one they carried out on August 20, 2020, so that “productive “ businesses had access to hard currency? And another question arises – where did they get this hard currency that they auctioned off? Because, according to the spokespersons of the Bank, due to the economic blockade, they have not received more than 400 million dollars in the year to date. How much did they auction off? If we have so little hard currency due to the economic blockade why are we giving them to the bourgeoisie?

Without a doubt, it is necessary to increase the amount of money, but with the goal that this increase should be based on the buying power of the people of Venezuela, so that in this way the demand for goods and services will increase and this will then stimulate national production and consumption, rather than have it be used by the national corporative and financial bourgeoisie to acquire our scarce hard currency and sequester it in off-shore money havens.

It would be very different, then, if these 30 billion per week would arrive to the national economy by means of strengthening the public sector, by being used to increase the nominal salary of the public administration workers, pensions, and retirement. This route would indeed stimulate the national production because the workers could demand more bananas and milk, and those who produce them would have someone to whom to sell their merchandise before it rots. It would be very different if these 30 billion per week would be used to finance the production of goods and public services, for the maintenance of hospitals, for buying medications, for investment in the electrical system, or public transportation, for education, or for investment in publicly-held businesses. Strengthening the public sector is how it should be in socialism. Money that we the people of Venezuela would be able to see in terms of greater services provided by the government. It would also be possible to direct these 30 billion per week to cooperative enterprises or those that are in the of the workers.

say that there is no money to increase salaries because imperialism has us blockaded. But we ask ourselves – how is it that there are bolivars to make it possible for the trans-national bourgeoisie to get bank credits in order to buy the tiny bit of hard currency that comes into the country due to the economic blockade, but there are no bolivars to raise public administration salaries, raise up the working class, the pensioners and the retired people, limit the fall of demand and of consumption and of production caused by the imperialist war?

are aware of the fact that directing 30 billion per week to salaries and to financing public administration will not stop the attack on the bolivar. But at least, while that attack continues, it should not be the working class who have to bear the greatest burden of the illegal assault. The 30 billion per week are equivalent to at least 40 times the current minimum salary for the 3 million workers in the public sector and the 4.5 million of people on pensions. That would be a good part of the necessary bolivars to increase those salaries and strengthen, above all, everything publicly held.