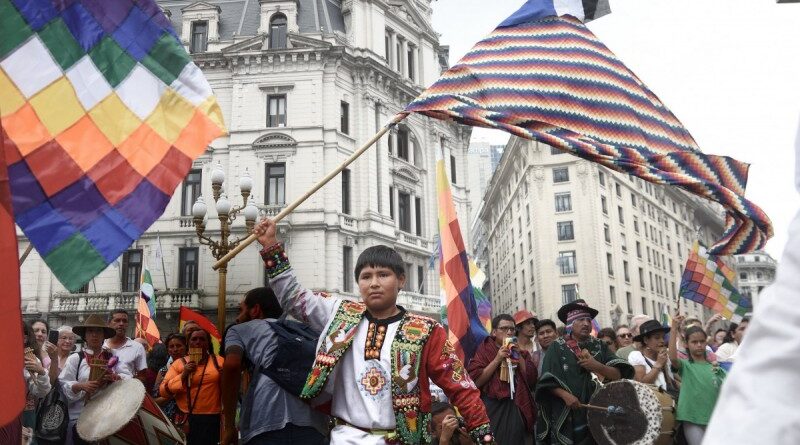 (Editorial note: We decided to republish this good piece by Arnold August due to current events in Bolivia)

The Trudeau government, in concert with the Trump administration and right-wing regional governments throughout Latin America, was instrumental in the 2019 coup against Bolivia’s first Indigenous leader, Evo Morales.

Now-debunked claims of “irregularities” during the October 20 elections were used as a pretext for the crisis after the Washington, DC-based Organization of American States (OAS) conducted an audit showing results from the unofficial, preliminary vote count failed to secure Morales a first-round victory. In response, Canada said it would support the coup administration of Jeanine Añez, a far-right Christian fundamentalist. In 2013, Añez tweeted, “I dream of a Bolivia without satanic indigenous rituals, the city isn’t made for indians, they need to go back to the countryside!”

On October 22, Canada was among those countries calling on the Permanent Council of the OAS to hold a special meeting on Bolivia. It took place two days later. The meeting provided the US Representative and Ambassador to the OAS, Carlos Trujillo, an opporutunity to repeat the narrative of “fraudulent” elections. At the same meeting, reported CommonDreams, the OAS—which gets 60 percent of its funding from the US government—refused to allow Jake Johnston, an analyst from the Center for Economic and Policy Research (CEPR), to present the organization’s preliminary response, which accused the OAS audit of making blatant distortions regarding the October election.

On October 29, Prime Minister Trudeau posted a photo of himself with right-wing, Pinochet-era Chilean President Sebastián Piñera. A readout from the meeting indicated that the “Prime Minister and the President exchanged views on key regional issues, including the importance of addressing people’s concerns around economic opportunity and inequalities. Prime Minister Trudeau also shared his concern about election irregularities in Bolivia. They welcomed the collaboration between Canada and Chile on a range of shared priorities, including efforts to address the crisis in Venezuela.”

That same day, Global Affairs Canada (GAC) issued a statement about “irregularities” during the Bolivian election, building “on the preliminary conclusions of the OAS Electoral Observer Mission which found that the electoral process did not comply with international standards.”

After organized violence by Bolivia’s rightist opposition forced the president and his Movement for Socialism (MAS) out of power, Morales resigned on November 10 and fled the country for Mexico. Subsequently, GAC issued a statement lauding the work of the OAS’s Electoral Observer Mission, concluding that the “will of the Bolivian people and the democratic process were not respected.”

The next day, President Trump joined the chorus, adding that the resignation of Morales represented “a significant moment for democracy in the Western Hemisphere.”

Canada followed suit. On November 14, GAC spokesperson John Babcock confirmed that Canada will work with the new interim administration—as long as it followed up on its commitment to hold new elections as soon as possible.

Following the coup, the situation in Bolivia changed overnight. The minority white, largely Christian elite stormed to power, removing the Indigenous Wiphala flag as the dual symbol of the country, and enabling the repression of MAS supporters in the streets.

In effect, the coup in Bolivia represents a concerted effort by the US-backed right-wing opposition to roll back the advances championed by Morales’s anti-imperialist government, and reinstall the power of the minority white elite. All of this was accomplished through brutal violence. In less than two weeks after the coup, 32 people were killed in protests, with more than 700 wounded.

On November 15, police and military forces opened fire on anti-coup protesters in Cochabamba (one of the nine departments of Bolivia), killing at least nine people and wounding many more. The Hospital México in nearby Sacaba received so many wounded protesters that it was treating victims outside the hospital building, exceeding its capacity. On November 19, eyewitnesses reported a military massacre at the Senkata gas plant in the Indigenous city of El Alto, and the tear-gassing of a peaceful funeral procession on November 21 to commemorate the dead:

In the Vinto municipality, one of the most disturbing attacks took place. An opposition mob, armed with sticks and stones and explosives, attacked the mayor’s office… The attackers set fire to the city hall and assaulted mayor Patricia Arce, of the MAS party. Arce was dragged down the street and forced to walk barefoot several kilometers. The attackers cut her hair and sprayed red paint on her body. They also abused and insulted her and forced her to say that she would leave office.

Meanwhile, the pretext of “fraudulent elections” was being questioned and refuted. The aforementioned CEPR report—co-authored by Guillaume Long—directly challenges the contention that the elections were fraudulent.

In addition, researchers from MIT’s Election Data and Science Lab, John Curiel and Jack Williams, published a fully documented report in the Washington Post indicating clearly that there was no fraud. The New York Times echoed these findings.

However, the OAS, the US and Canada did not acknowledge any of the revelations.

Now, the de facto government led by Áñez has postponed elections three times since March of this year.

Why is the coup government refusing to hold elections? According to polls, the leading MAS candidate, Luis Arce, would obtain 31.6 percent of the vote, followed by 17.1 percent for former president Carlos Mesa. Áñez, on the other hand, is supported by just 16.5 percent of Bolivians.

Despite calls from Canada and the US demanding elections “as soon as possible,” neither country has released any statements condemning the coup government for its inaction. Bolivia’s largest unions and social movements are currently leading a general strike to demand that the original election timetable be respected.

In the words of Bolivian journalist Ollie Vargas, who has been reporting from the country since shortly after the coup, the regime is currently “mobilizing paramilitary groups to attack protesters” in three regions.

Bolivia’s anti-coup uprising has been raging for a week. The regime is mobilizing paramilitary groups to attack protesters in 3 regions. However, the police & military have been almost absent (apart from in one small town). Lots of rumours that police are refusing to be deployed

More recently, on August 9, Kawsachun News—the English language service of Radio Kawsachun Coca, a Cochabamba-based station of the National System of Original Peoples’ Radio (RPO), which was promoted by former President Morales—reported that Añez’s government is threatening to launch a wave of paramilitary attacks on pro-democracy protests.

Bolivian coup leader Fernando Camacho threatens to launch a wave of paramilitary attacks on pro-democracy protests. He’s ordered the regime to crush the protests immediately. If they fail to, he will mobilize the violent extremist groups that led the protests against Evo Morales. pic.twitter.com/l97w9T9rHG

In response to the delay of general elections and the interim government’s failure to contain the COVID-19 pandemic, more than 70 blockades have been organized by social groups and labour unions loyal to Morales.