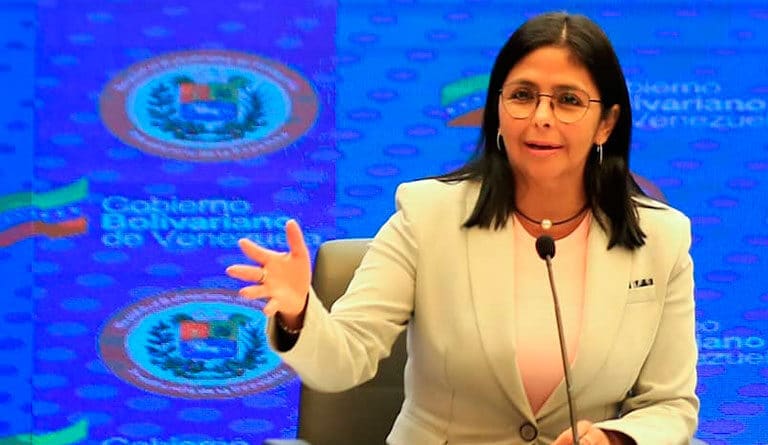 The official will temporarily occupy the position previously held by Simón Zerpa who has been demoted to president of “Banco Bicentenario” according to the newspaper El Nacional. Simon Zerpa was appointed minister on October 2017. The now former minister Zerpa was acting as minister until yesterday during a United Nation meeting of Ministers of Finance via video-conference and no reference to the move was made.

RELATED CONTENT: The Wages Debate and the New Economic Reality

Maduro’s decree was reported through Official Gazette 41,960. The document specified that Rodríguez will be in charge in the capacity of chief officer “with all the duties of the aforementioned post, and in accordance with the current legal system.”

In the context of the parliamentary elections of 6 December, eight ministers have left the presidential cabinet as candidates for deputies to the National Assembly. Zerpa’s departure is the ninth change in President Maduro’s cabinet since last week.

Delcy Rodríguez is a lawyer, graduated from the Central University of Venezuela, specialized in Labor Law, an institution where she was a student leader and later professor. She was Minister of Communication and Information, Director of International Affairs in the Ministry of Energy, Minister of the Office of the Presidency, Vice Minister of Relations with Europe and was also in charge of the General Coordination of the Vice Presidency of the Bolivarian Republic of Venezuela. She was Minister of Foreign Affairs of the Bolivarian Republic of Venezuela, appointed on December 26, 2014 by President Nicolás Maduro, a position she held until June 21, 2017. After her appointment, she became the first woman to hold that position in Venezuelan history. Elected on August 4, 2017, president of the National Constituent Assembly of Venezuela (ANC) and on June 14, 2018, she was appointed as Executive Vice President of the Republic.

She graduated from the Central University of Venezuela (UCV), where she was awarded with a law degree in 1993.

In 1996 she studied a Master’s Degree in Social and Trade Union Law at the University of Paris X-Nanterre, where she presented a thesis called ‘Participation and control of workers in collective bargaining.’ It was a study of the system of union representation and collective bargaining in France and its relationship with the predominant form of State.

In 2000 she was a doctoral student in Social Law at the University of Paris X-Nanterre. Her doctoral thesis dealt with the legal life of the rights derived from collective bargaining in France, Spain, the United Kingdom and Venezuela, a study of the different collective bargaining regimes that characterize the labor legal systems of those countries.

Between 1999 and 2000 she received a degree in Economic Philosophy at the University of Cambridge, England.

In 2002 she was studying for a Master’s Degree in Political and Social Theory at Birbeck College, University of London.