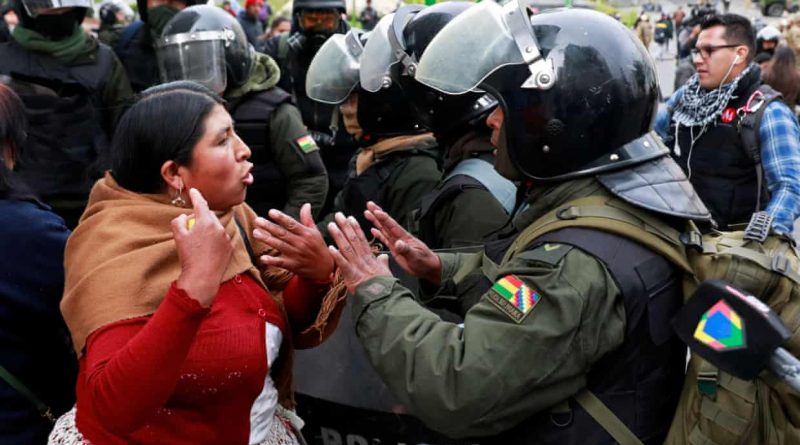 The indigenous-socialist project accomplished what neoliberalism has repeatedly failed to do: redistribute wealth to society’s poorest sectors

Evo Morales is more than Bolivia’s first indigenous president — he is our president, too. The rise of a humble Aymara coca farmer to the nation’s highest office in 2006 marked the arrival of indigenous people as vanguards of history. Within the social movements that brought him to power emerged indigenous visions of socialism and the values of Pachamama (the Andean Earth Mother). Evo represents five centuries of indigenous deprivation and struggle in the hemisphere.

Evo’s critics, from the anti-state left and right, are quick to point out his failures. But it was his victories that fomented this most recent violent backlash.

Evo and his party, the indigenous-led Movement for Socialism (MAS in Spanish), nationalized key industries and used bold social spending to shrink extreme poverty by more than half, lowering the country’s Gini coefficient, which measures income inequality, by a remarkable 19%. During Evo’s and MAS’s tenure, much of Bolivia’s indigenous-majority population has, for the first time in their lives, lived above poverty.

The achievements were more than economic. Bolivia made a great leap forward in indigenous rights.

Once at the margins of society, Indigenous languages and culture have been thoroughly incorporated into Bolivia’s plurinational model. The indigenous Andean concept of Bien Vivir, which promotes living in harmony with one another and the natural world, was written into the country’s constitution becoming a measure for institutional reform and social progress. The Wiphala, an indigenous multicolor flag, became a national flag next to the tricolor, and 36 indigenous languages became official national languages alongside Spanish.

Evo’s indigenous socialism has become the standard bearer for the international indigenous community. The esteemed Maori jurist, Moana Jackson, once referred to Bolivia’s 2009 constitution as the “nearest thing in the world to a constitution that has come from an Indigenous kaupapa (a communal vision).”

The indigenous-socialist project accomplished what neoliberalism has repeatedly failed to do: redistribute wealth to society’s poorest sectors and uplift those most marginalized. Under Evo and MAS leadership, Bolivia liberated itself as a resource colony. Before the coup, Evo attempted to nationalize its large lithium reserves, an element necessary for electric cars. Since the coup, Tesla’s stocks have skyrocketed. Bolivia rebuked imperialist states like the United States and Canada by taking the path of resource nationalism to redistribute profits across society.

This was Evo’s crime.

“My sin was being indigenous, leftist, and anti-imperialist,” Evo said after being coerced into resigning this week.

His replacement, Jeanine Añez Chávez, agreed. “I dream of a Bolivia free of satanic indigenous rites,” the opposition senator tweeted in 2013, “the city is not for the Indians who should stay in the highlands or the Chaco!!!” After Evo’s departure, Chavez declared herself interim president while holding up a large bible, though she failed to get the required quorum in the senate to do so.

Next to her stood Luis Fernando Camacho, a member of the Christian far-right. After Evo’s resignation, Camacho stormed the presidential palace, a flag in one hand and a bible in the other. “The bible is returning to the government palace,” a pastor said on a video while standing next to Camacho. “Pachamama will never return. Today Christ is returning to the Government Palace. Bolivia is for Christ.”

In places where the opposition is strongest, Wiphala flags, symbols of indigenous pride, were lowered and burned. Police officers cut the flags from their uniforms. What were symbolic acts quickly escalated into street-level violence.

MAS members’ houses were burned. Evo’s home was ransacked. Masked armed men began rounding up suspected MAS supporters and indigenous people in the streets, loading them into the back of trucks. A handful of protesters have been killed. The same social movements that ushered Evo and MAS into power have taken to the streets to defend the gains of their indigenous revolution.

Amidst the chaos, anti-indigenous race-hatred has gripped the country since Evo’s October 20 re-election. While left critics continue to rail against Evo, paradoxically blaming him for the coup that overthrew him, no evidence has emerged of election fraud. The Organization of American States cited “irregularities” without yet providing documentation. A report by the Center for Economic and Policy Research, however, found no irregularities and no fraud.

To appease critics, Evo even agreed to re-elections but was forced to resign under orders from the military and escalating rightwing violence. No one resigns with a gun pointed to their head. Clearly, it was a coup.

Fearing assassination, Evo fled to Mexico where he was granted asylum and greeted by a cheering crowd.

The future of Bolivia is currently marching in the streets, the millions of people who voted for Evo in the last elections, the 47% whose voices and votes were stolen by the violent return of the old, colonial oligarchy.

Other critics still contend that Evo’s 13-year tenure was too long. They mention Evo losing a referendum to amend constitution but failing to note the Supreme Court ruling that allowed him legally to run for another term. For our indigenous president, after five centuries of colonization, 13 years was not long enough.

“We will come back,” Evo recently assured supporters, quoting the 18th-century indigenous resistance leader, “and we will be millions as Tupac (Katari) said.”

Featured image: ‘“My sin was being indigenous, leftist, and anti-imperialist,” Evo said after being coerced into resigning this week. Photograph: Henry Romero/Reuters 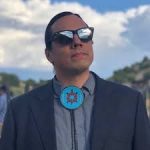 Nick Estes is a citizen of the Lower Brule Sioux Tribe. He is an Assistant Professor in the American Studies Department at the University of New Mexico. In 2014, he co-founded The Red Nation, an Indigenous resistance organization. He is the author of the book Our History Is the Future: Standing Rock Versus the Dakota Access Pipeline, and the Long Tradition of Indigenous Resistance (Verso, 2019)