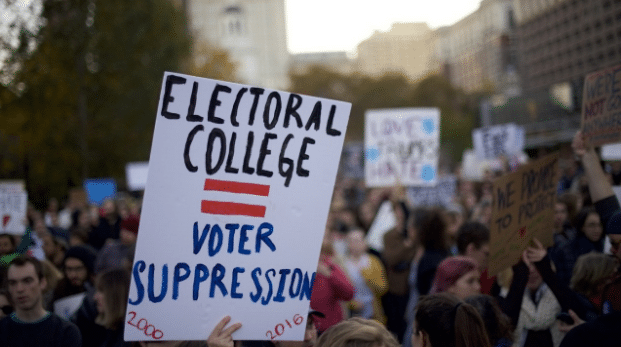 Regardless of the traditional bluster about the Founding Fathers and the world historic nature of the US Constitution, the electoral system it set up to choose a new president is far from democratic. We now find Trump attempting to use the Constitution as written to be “re-elected.” Those who laud “our great democracy,” claiming Trump is maneuvering in an illegal manner to stay in office, even alleging a “fascist coup,” base their assertions to no small extent on illusions about the US electoral system.

The first illusion we must discard is that the people’s vote determines the winner of the US presidential election. That is not true, as many were unpleasantly reminded in 2016 when, for the second time this century, a loser of the popular vote was declared president.

Article II, Section 1 of the Constitution states the winner of the Electoral College vote determines who will become the new president. Each state and the District of Columbia choose several Electors equal to the number of its senators and representatives (D.C. receives the same number as the least populous state). According to the Constitution, these Electors gather at the Electoral College after the election to choose the new president.

The second illusion is that the winner of the popular vote in each state wins the state’s Electors for the Electoral College. In fact, the Constitution states that Electors are under no obligation to honor the majority vote of the people of their state. Our vote for president is no more than a recommendation.

The Constitution Grants Full Authority to the Electoral College; Our Vote is a Suggestion

All laws pledging Electors to vote for their party’s chosen presidential candidate originate at the state level, not the national level. The Supreme Court upheld the legality of these state laws in its 1952 ruling Ray v. Blair.

Just this year the Supreme Court ruled in Chiafalo v. Washington that states may choose to enforce state laws that bind Electors to voting for the winner of the state’s popular vote. The Supreme Court recognized that “such promises of candidates for the Electoral College are legally unenforceable because violative of an assumed constitutional freedom of the Elector under the Constitution, Art. II, section 1, to vote as he may choose in the Electoral College,” but added “it would not follow that the requirement of a pledge is unconstitutional.”

Electors not Voting as Pledged

As of 2020, only 33 states and the District of Columbia have laws requiring Electors to vote for the candidate they pledged to vote for. However, in half of these jurisdictions no legal mechanism enforces this. Only 14 of the 50 states have voided votes contrary to the pledge their Electors and replaced the respective Electors. In two of these states they may also be fined. Three other states impose a penalty on “faithless” Electors but still count their votes as cast.

RELATED CONTENT: Let Everybody Vote, Even if They’re Incarcerated

In the 2016 presidential election, some Electors in six states (Colorado, Minnesota, Hawaii, Texas, Maine, and Washington) did not vote according to their pledge. Only Colorado, Maine, and Minnesota invalidated those votes. Washington became the first state to ever fine faithless Electors (a mere $1000 each) for their vote.

The most disputed presidential election occurred in 1876 in which rightwing forces engineered the end of Black Reconstruction, laying the basis for Jim Crow. Samuel Tilden outpolled Rutherford B. Hayes in the popular vote by a margin of 3%. He won 184 electoral votes to Hayes’ 165, with 20 electoral votes in dispute. Each party in Florida, Louisiana, and South Carolina reported its candidate had won the state amid various allegations of electoral fraud and intimidation of voters. Congress then stepped in and selected the president by handing 20 electoral votes to Hayes, giving him the victory with 185 electoral votes to 184.

The most recent and scandalous denial of the popular vote occurred in 2000, when the mostly Republican appointed US Supreme Court intervened in the decisive Florida vote. In a 5-4 decision, they upheld the Republican dominated Florida state legislature’s right to stop the vote recount, where “hanging chads” had arisen as a major issue. This left 178,000 votes in mostly Democratic areas yet to be counted, allowing Republican candidate George W. Bush’s 537 vote lead to stand and be selected as president.

Methods Available to States for Disregarding the Popular Vote for President

As CNN reporter Fareed Zakaria recounted before the 2020 election, “Taking account of the confusion” over the vote, whether real, alleged, or fabricated, or claimed mobs and violence at voting stations, “legislatures decide to choose the Electors themselves.”

Zakaria continued that in 2020 eight out of nine key swing states have Republican legislatures. “If one or more decide that balloting is chaotic and marked by irregularities, the [state legislature] could send [to the Electoral College] what they regard as the legitimate slate of Electors, which would be Republican.” That would give Trump ample Electoral votes to be declared the new president.

If who are the valid Electors in a state is disputed, when the US Congress validates the Electors on January 6, it could exclude all the Electors from a disputed state. For instance, if in 2020, both Florida and Wisconsin submitted two separate slates of Electors, Congress could invalidate both slates and the remaining Electors from 48 states would choose the president. If this happened, neither Biden nor Trump would gain the required 270 Electors.

In that situation, the Constitution, Article II, Section 1, explicitly directs the House of Representatives to vote to determine the new president, but it does so with each state casting a single ballot. If this were to happen Donald Trump would be “re-elected” in a constitutional manner, because most state legislatures have Republican majorities.

What Does This Mean for Our Future?

This reveals that the “democratic” nature of the US election system is wishful thinking, based on – possibly deliberate – misunderstanding. Nowhere does the original Constitution nor any later amendment specify a citizen’s right to vote for president. Yet, the Constitution does provide many avenues through which to nullify a presidential vote if the winner represented a force outside of the traditional oligarchy. That helps explain why, given the every four-year much heralded “great exercise in democracy” no actual representative of the US people, nor progressive has ever been elected president, no matter how much people try.

Regardless of the popular vote for president, the two corporate parties have many constitutional maneuvers at their disposal to block a possible future working people’s party candidate who wins the national election from taking office. Given that the two parties, in their struggles even among themselves, have sought to use the Constitution to invalidate unfavorable popular vote counts – in 2000, 2004, 2016, 2020 – it can be expected they will use every means available to block any successful working people’s party.

This shows that the struggle to build a mass working people’s party would encounter barriers the Founding Fathers rigged in the Constitution to ensure ruling elite control. Unfortunately, the US people are still at the level where most desiring fundamental change think it can come from within the system, within the two corporate parties, within the restrictive constraints of the US Constitution.