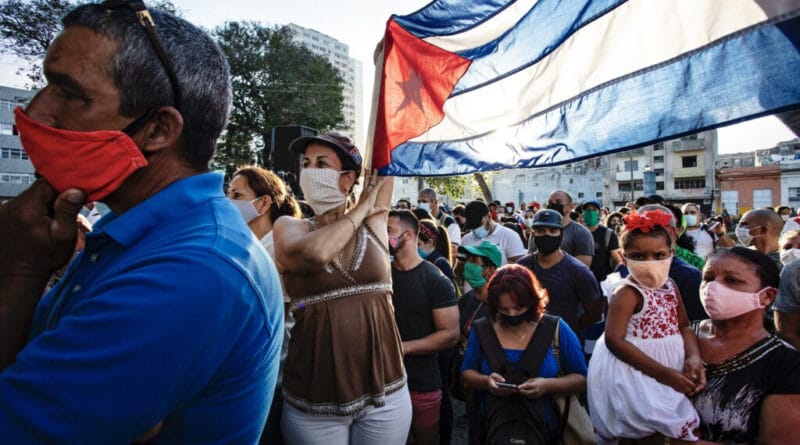 Invasion gets bad press – those close-ups of foreign boots marching over a beach or a neighborhood like El Chorrillo in Panama in 1989, where they still don’t know the total number of those who were killed. After more than a century of relentless experience, the military interventions of the United States in Latin America have fallen into disrepute, lost their glamour, gone out of style. Now they’re going in for soft coups.

The soft coup consists of dressing up a minority as the majority, broadcasting their complaints, stirring up controversies and confrontations, and wearing down the true governing majority until it’s possible to take them down by means of some judicial farce, as in Honduras, or a parliamentary sham, as in Brazil, or an electoral charade, as in Bolivia, or forcing a foreign intervention, as they are attempting in Venezuela, and as some dream of doing in Cuba.

It’s more complicated than the coups done by invasion of the Marines, but, in contrast to that, it has modern-day local color, with archetypes of the evil dictators as the bad guys, a bunch of good guys with “freedom fighter” stereotypes, with approximations of remakes of epic films and with false narratives of civic heroism, and with all of them, good and bad, designed as actors in a Grade Z action movie by corporate media and social media platforms, those great tools for domination.

Well, that’s what Cuba has been going through in these past days. We have some fake artists who barricaded themselves in a house in the San Isidro neighborhood of Old Havana, and a context in which a lot of things have gotten all mixed up together: legitimate needs of dialogue with cultural authorities, confusions, political opportunism, the pandemic, and economic tensions aggravated by a whole panorama of measures imposed by the Trump regime – cutting off remittances, stopping ships carrying fuel, financial sanctions …

RELATED CONTENT: Who’s Behind the Anti-Cuban Show in San Isidro?

In a few hours, the operation of the “artists” was inactivated without anyone suffering so much as a scratch. But from this starting point, we’ve seen another re-run of an old movie: the Chargé d’Affaires of the United States embassy in Havana using his personal auto to transport these “artists”, while high-level functionaries of the State Department call these local employees of the soft-coup apparatus their colleagues. Some of those involved made a display of their liking for Donald Trump, whom they proclaim as their president, and of receiving financing from the U.S, federal government funds intended for the “promotion of democracy.”

As researcher Tracy Eaton has documented, the United States government has spent between 20 and 45 million dollars annually since 1996, when a blank check was given for financial support to local groups and international observers with the goal of instituting “regime change in Cuba” under Section 109 of the Helms-Burton Act.  More than 500 million dollars have been directed to these operations by this means, although this is not the only route for this money, nor even the most common one for stirring up “dissidence” in Cuba. No one knows for sure how much these undercover operations receive, nor what the total sum is that has been sent to San Isidro for this attempt to throw a lighted match into the gunpowder.

A good chunk of change also goes to a cluster of on-line media platforms created by the U.S. government to do “dis-information” about Cuban affairs.  Hundreds of internet publications have appeared in Florida since 2017 with “Cuba” as part of their on-line names.  The objective is to add weight and volume to the toxic information about Cuba, repackaging the same agenda for different audiences and portraying the opinions of the United States as if they were something coming from Cubans themselves. This differs from other periods in the so-called Fourth Generation Warfare or Unconventional Warfare in that the new Soft Coup laboratories operate simultaneously in the physical, psychological, perceptual, and virtual realms, so that, after the confusion settles, nothing remains but cultural wasteland.

The Guardian recently interviewed the correspondent of one of these Florida digital media outlets, which had received a USAID (US Agency for International Development) subsidy of $410,710. The ADN Cuba journalist told the Guardian, a British newspaper, that the measures taken last month by the White House to forbid remittances from being sent to Cubans by family members in the U.S. are “perfect” because most of the money ends up in the state treasury, a shocking lie. “ If I were in the United States, I would have voted for Trump,” added this “impartial reporter,” who has been carrying fuel to the San Isidro fire for weeks, just as many others have done. It’s not the same as invading a country, but it is still a flagrant attempt to disguise a violent minority as a freedom-seeking majority.

In the middle of all this, the reality of what is actually happening in truly cultural terms in Cuba has been concealed for the poor misinformed world audience. Right now, more than 1,800 films and more than 800 scripts have been entered in the International Festival of New Latin-American Film in Havana. We are preparing for this annual festival, which is our effort to keep our culture alive without echoes of the results of a soft coup, other than those in the dense jumble of disinformation.