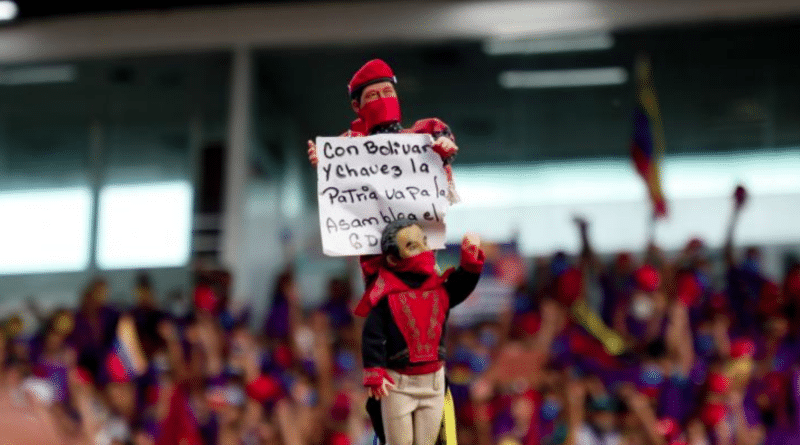 The November 2020 elections exhibited the flaws in the US electoral system. While in many countries (“developed” or not) the result of the elections is known on the same day that the voters cast their votes, in the United States the announcement of the result got delayed, especially in the most contested states.

For the West, elections are the core of a “healthy and successful” democracy. This already leaves in a serious position the electoral system of the United States, which is based on the Electoral College, an old constitutional provision that has not been modified and that denies voters the right to direct vote.

American citizens do not vote to elect the president of their country, at least not directly. Although different states have different systems, whether it is marking a ballot paper or tapping a touchscreen, not a single person who attended the polls on November 3 chose either Donald Trump or Joe Biden.

The main fight of the candidates is in the 270 electoral votes (of the Electoral College) distributed irregularly in the 51 states of the union, with special emphasis on those states that are decisive (the so-called pendulum states or swing states).

This archaic system was designed in the 18th century, when the North American territory was made up of 13 colonies controlled by white supremacists who decided to form a confederacy in order to establish themselves as a nation, to face the economic impositions of England and to expand their own power.

The mechanism they found to guarantee federalism and to not allow the president to be controlled by the legislative power was the electoral college, an institution that assigns a group of electors (electoral votes) to each state, who are the ones who finally elect the president of the United States.

At that time, in the late 1700s, in a country where the slavery of Black people and the massacre of indigenous peoples formed the rule of law, the majority of the population did not have the right to cast a vote.

The constitution of the country allows each state to select the electors “in the manner that their Legislature indicates“. From the Civil War (1861-1865) to the present, the states select the electors through direct popular vote. Whether it is by mail, early voting, or on the day of the election, every US citizen votes for a group of electors who are committed to the presidential candidates and who remain anonymous most of the times.

After the voting ends, the electoral authorities of each state certify the results and accredit the electors. These electors are generally people loyal to the parties who do not tend to deviate from the vote they represent, although this irregularity has become more frequent.

The electors meet a few weeks after the day of the election to officially vote for the next president.

Although state electoral officials certify the results, there is no centralized institution to regulate the process at the national level. Therefore, it is the corporate media organizations that have teams of employees who examine vote counts and review demographics to “call” the states (announce a winner) before the official count ends, for the latter may last for several days, as we have witnessed since November 2020.

This is where the interests of the billionaires who run these media converge. In the case of Biden and Trump, the vast majority of media conglomerates endorsed and funded the Democratic Party option, due to which they hastily reported results favoring Biden.

DISTRUST TOWARDS AN OBSOLETE ELECTORAL SYSTEM

Despite the fact that the victory of the challenger Joe Biden seems certain, the tycoon President Donald Trump has not given up in denouncing that the elections are being stolen, a campaign that began long before the elections took place. He alleges that there were false votes, that legal ballots were invalidated, and that Republican Party observers were not allowed to access the centres for counting of votes.

The courts have dismissed most of Trump’s accusations, however, it has not been possible to prevent the president’s strategy from eroding the confidence of the population in the electoral system, nor the calls for attention from other Western democracies.

According to a survey by the Rasmussen Report company, before the election date, 47% of the voters consulted believed that it was likely that the Democrats “would steal or destroy Trump’s votes in various states.”

On October 27, 73% of those consulted affirmed that it was highly probable that their vote would be correctly registered and counted. After the elections, that perception fell to 71%.

When asked if Trump should concede the election to Biden, 57% of the Republicans consulted said no, but what is more notable is that 16% of the Democratic side also consider the same.

The study used indirect questions in order to obtain a “more relaxed response” and to better understand the intention of the respondent. Thus it was possible to know that only 51% of all the voters consulted consider “that their friends and neighbors think that Trump should concede. 30% think they would disagree and 18% are not certain.”

European allies revealed their “concern” about the situation in the United States, most blaming Trump’s behavior and avoiding the fact that the political crisis and electoral distortions have deeper roots.

“We should wait and see that all votes are counted,” said British Prime Minister Boris Johnson.

“It is time to keep a cool head until the independently determined results are available. Anyone who continues to add fuel to the fire in a situation like this is acting irresponsibly,” declared German Foreign Minister Heiko Maas.

“Baseless allegations of systematic deficiencies, especially by the president in office and on election night, damage public trust in democratic institutions,” expressed Michael Georg Link, head of the election observer mission of the Organization for Security and Cooperation in Europe (OSCE).

Beyond the struggle among elites to take power in Washington, the elections exposed, once again, that money, media and officials with key positions at the institutions of authority have much greater political weight than the will of the voters.

This new disappointment of Americans adds to a series of previous recent frustrations (economic decline, health crisis, racial protests), and is drained into civil unrest that is also used in the agendas of those fighting for power.

Ironically, the principles of “free and fair elections” that the West proclaims are fully observed in the Venezuelan electoral system, in stark contrast to the flaws of the peculiar North American democracy.

Elections should function as instruments that the voters find trustworthy and that produce visible, scrutinable results that are declared as immediately as possible.

Tomorrow the parliamentary elections will be held in Venezuela. In this election Venezuelans will vote directly for the 14,000 candidates who are running for the 277 seats that will make up the new National Assembly, under a new scheme has expanded the number of legislators to make the parliament more representative.

Despite the reluctance of the European Union to send an international observation mission (a decision that follows Washington’s coup guidelines) and the attacks that are coming from the Organization of American States (an archaic and questionable organization in the ambit of democracy, an organization of which Venezuela is no longer a member), more than 300 expert observers have confirmed their attendance at the December 6 elections.

In a televised meeting, Venezuelan President Nicolás Maduro reported that the observers come “from the most important institutions for the development of electoral techniques in Latin America and the Caribbean. International observers are coming from Europe, Asia, Africa, Latin America, the Caribbean and even from the United States.”

International representatives are coming from different countries. On entering the Simón Bolívar International Airport, they are subjected to rigorous health protocols, all free of cost, to rule out COVID-19 infections. Then, the National Electoral Council (CNE) provides them with a biosecurity kit for their personal protection.

As new technologies have been incorporated into the software and hardware of the electoral system, the authorities have carried out audits to certify all stages of the electoral process, with both physical and virtual participation of organizations with political, technical and international observers.

“We have done each stage with open doors,” assured the president of the CNE, Indira Alfonso, in an interview for Telesur. The “national consensus, plurality and diversity” of the system have been demonstrated with facts, she added.

From the opposition spectrum, parties that dissociated themselves from the plans of boycotting institutions of the State that was encouraged by Juan Guaidó’s group, are participating. By getting involved, these organizations are sending a message of confidence towards the country’s electoral system particularly to a sector of the voters that has been exposed to the antipolitical narrative of the anti-Chavismo discourse subordinate to the orders of the US government.

“The machines that are going to be used are absolutely reliable. Let us not continue to listen to gossips and allow ourselves to be negatively influenced by the abstentionist groups,” said Javier Bertucci, opposition candidate for Alianza Democratica, at a press conference held on October 28.

It is worth noting that the Venezuelan opposition, inspite of insisting on coup channels, has also claimed victories in positions at the state, municipal and parliament levels when it has participated in the elections, precisely because of the State’s respect for democratic principles.

We must highlight a popular organization that is making its debut in the December 6 elections. It is the Red de Articulation y Acción Sociopolítica (RAAS), a grassroots organization of the United Socialist Party of Venezuela (PSUV).

The RAAS was conceived as “a territorial system of unity and superior organization for the Comprehensive Defense of the Nation”, the objective of which is to coordinate at the local level “the actions between the State and the organizations of People’s Power in search of the greatest sum of happiness of the people”.

In these elections, those who make up that system in the communities, that is, the Bolívar-Chávez Units (UBCH), the Communal Councils and the CLAP, have organized the electoral campaign of Chavismo.

Through the RAAS, the community organizations can reach the voter directly, allowing Chavismo to look into the eye of the people and to invite them to go to the polls, to inform them of what the voting process is like, of the biosecurity measures that will be implemented, and to keep them alert about any irregularity that may occur on the day of the event.

However, its efforts have delved into a lot more than just the circumstantial event of December 6. At this new organizational level, Chavismo has also been able to detect and solve community problems, often using local resources or articulating with state institutions.

In the Western perspective, elections were supposed to have been conceived to guarantee citizens the authority to decide who will represent them in governments, thereby promoting social integration instead of fragmentation. We have already seen that the US presidential elections failed in that spirit.

On the other hand, in Venezuela, the arrival of Chavismo has not only strengthened the institutions so that they truly represent the will of the people, but has also given them new instruments so that they actively participate in the governance of the country.