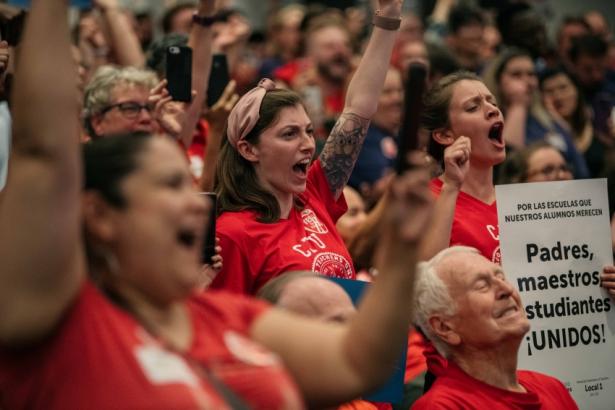 Solving Chicago’s affordable housing crisis? What’s that got to do with a labor contract for educators?”

That’s the question the Chicago Sun-Times editorial board asked last week as the city’s teachers and school support staff inched closer to an October 17 strike date, with little progress made in negotiations for a new contract.

A standoff at the bargaining table over the Chicago Teachers Union’s (CTU) package of housing demands dominated the city’s news cycle last week. The union is asking Chicago Public Schools (CPS) to provide housing assistance for new teachers, hire staff members to help students and families in danger of losing housing, and take other steps to advocate for more affordable housing overall in the city.

In response, recently elected Mayor Lori Lightfoot accused the union of holding up contract negotiations, and the Sun-Times chided teachers to take a “reality check.”

It’s true that CPS has no legal obligation to bargain with the union over affordable housing policy. But it’s hardly unrelated—an estimated 17,000 students in the city are homeless, as CTU Vice President Stacy Davis Gates stated on Chicago Tonight.

Housing advocates agree. “The mayor’s view reflects a very narrow understanding of the professional responsibilities of public school educators,” says Marnie Brady, assistant professor at Marymount Manhattan College and research committee co-chair of the national Homes For All campaign. “The living conditions of their students are indeed the working conditions of their classrooms.”

By raising an issue that affects not only teachers, but the communities they live and work in, CTU is deploying a strategy known as “bargaining for the common good.” That approach was key to the union’s victory in its landmark 2012 walkout, but a potential strike of 35,000 school and parks workers this week is shaping up to be an even more dramatic test.

Bargaining for the common good

During their eight-day strike in 2012, Chicago teachers rallied under the slogan “fighting for the schools our students deserve.” By highlighting issues such as class sizes, standardized testing, predatory Wall Street deals and a pattern of racist disinvestment in the city, teachers helped secure wide support from the city’s parents while wringing concessions from then-Mayor Rahm Emanuel.

The CTU also helped galvanize a new wave of teacher militancy that’s seen unions in red states use unauthorized strikes to address abysmal state funding for education and protest tax breaks for the rich and the fossil-fuel industry.

Teachers in cities like Los Angeles, meanwhile, have won contracts that include more nurses and additional resources for students, as well as special provisions requiring the district to provide immigration support for students and curtail school policies that the union said amounted to racial profiling.

The increasing embrace of “common good” bargaining by teachers has, in turn, helped boost public support of their unions nationwide—from 30 percent in 2015 to 43 percent in 2019, according to a poll from Education Next.

Frequently vilified as greedy in the media, teachers unions often have their hands tied by laws restricting the issues they can bargain and strike over. Per a 1995 Illinois law, for example, the only “mandatory” bargaining issues for Chicago teachers are pay, benefits and the length of the school day. But unions can still mobilize public pressure to try to force employers to negotiate over additional demands.

In 2013, citing inspiration from Chicago, the St. Paul Federation of Teachers (SPFT) worked with community allies to jointly draw up a list of 29 demands to bring into its contract negotiations, including the expansion of preschool, reforms to school discipline procedures and the reduction of standardized testing. While the school district initially refused to negotiate over 18 of these areas, a united front by teachers and community members eventually pressured it to include language on almost every area in the SPFT’s new contract.

“I had negotiated almost a dozen previous contracts for the SPFT,” explained the union’s then-president Mary Cathryn Ricker in a 2015 article for Dissent. “But, for the first time, I felt that signing a contract was just one step in building a larger movement.”

These victories helped give birth to a formal network called “Bargaining for the Common Good,” which now includes some 50 unions and community organizations. The goal is to expand labor’s scope of bargaining beyond wages and benefits to advance a broad, working-class agenda and go on the attack against shared enemies, including Wall Street and corporate America.

Three strikes at once

Chicago remains at the cutting edge of this effort. This fall, it may not be just CTU walking out—school support staff and Chicago Parks District workers represented by SEIU 73 have also set strike dates of October 17. While negotiating separately, the unions are pushing a common narrative: The new mayor must get the city’s priorities in check by committing more resources to vital public services and the workers who make them run.

Other key issues include adequate staffing of nurses, counselors and librarians—which many of the city’s schools lack entirely—rolling back the privatization of school services, creating enforceable sanctuary protections for undocumented students, and lifting poverty wages for school support staff and part-time parks workers.

The unions have also taken on the question of where the money to accomplish all this could come from. The Chicago Teachers Union has been leading the fight against massive tax giveaways to developers through the city’s Tax Increment Financing (TIF) program. Earlier this year, SEIU 73 members waded into what’s often a third-rail for public-sector unions when they protested outside Chicago Police Department headquarters to demand the city stop diverting resources from schools and parks to the police budget.

Venus Valino, a member of SEIU 73’s bargaining team, notes that the parks district has been subsidizing police patrols to the tune of about $4 million a year. But she rarely sees police where she works, in Wolfe Park on the city’s far Southeast Side, while dealing with periodic drive-by shootings, and a teen who was stabbed in the neck.

“That money is going to tourist areas, and we’re mostly left to fend for ourselves,” Valino says. She would prefer that resources be put back into dedicated park security guards who are familiar with the area, as well as public programming that would benefit the neighborhood. Two-thirds of park staff are part-time and receive zero paid-time-off, she adds.

As a 20-year parks worker, Valino sees her role as similar to that of a teacher. During the 2012 teachers strike, she remembers, she helped take care of 300 school children when the city made use of parks for its contingency plan. The fact that parks workers could be out on strike at the same time as teachers this year will put a squeeze on both city agencies and parents, but Valino says that since the union announced a potential strike, she’s been receiving calls of support from parents she’s worked with over the years.

“We’re always there for the public, and we see the needs of the public,” she says. “When it was freezing this winter, we’re the ones who opened up warming centers. I’m really touched that the public is thinking about how they can support us.”

The close relationship between public unions and the communities they serve can make them especially well-suited to bring the concerns of those communities to the bargaining table. The CTU’s demand for affordable housing is perhaps the boldest example of this, and it’s one that labor commentators have been urging unions to take up in recent years.

Lightfoot and media commentators, conversely, have attempted to use this demand to paint the CTU as out-of-touch and drive a wedge in public support. “If the CTU strikes over this one, we predict it will not go down well with most of the rest of the city,” wrote the Sun-Times editorial board.

Eva Jaramillo, a mother of three who is currently in court fighting her family’s eviction, tells In These Times that she is grateful to see the teachers union taking up the issue. Jaramillo’s 10-year-old daughter attends North River Elementary, just blocks from the Albany Park apartment where the family has lived for 16 years. Earlier this year, Jaramillo was served with an eviction notice after complaining about malfunctioning heat during the winter. Two other families in the building who reportedly complained about conditions are also facing eviction, which would represent a violation of Chicago’s landlord-tenant laws. The group has formed a tenants union and protested outside the landlord’s home, but one of Jaramillo’s biggest concerns is that her daughter will have to transfer schools.

Chicago students living in temporary housing situations have the right to remain enrolled in their current school, and can stay until the academic year if they find new housing. But Jaramillo is skeptical that, if her family is evicted, they will ultimately be able to find affordable housing anywhere nearby.

The school district doesn’t keep statistics on how housing displacement ultimately contributes to school enrollment, but anecdotal evidence suggests that in many neighborhoods, they’re closely linked.

In Albany Park, a gentrifying neighborhood in the city’s northwest side, the Autonomous Tenants Union documented how a 2017 mass-eviction in a single building being rehabbed by its new owner impacted some 30 children who attended Hibbard Elementary.

Data from a study released in May shows that the eviction rate is twice the citywide average in some Black neighborhoods, including ones where schools were shuttered in 2013 due to purported under-enrollment. Thanks to the model known as student-based budgeting, when students and their families have been forced out of schools, funding follows them. This cycle of housing displacement and school disinvestment has played a prominent role in driving thousands of Black residents from Chicago each year.

For these reasons, it’s hard for Jaramillo to understand how the city could consider housing and schools as unrelated. “The school and home have a deep relationship,” she says. “The school is the second home, but children also need their first home to be a stable one.”

What do you want to see from our coverage of the 2020 presidential candidates?

As our editorial team maps our plan for how to cover the 2020 Democratic primary, we want to hear from you:

What do you want to see from our campaign coverage in the months ahead, and which candidates are you most interested in?

It only takes a minute to answer this short, three-question survey, but your input will help shape our coverage for months to come. That’s why we want to make sure you have a chance to share your thoughts.

Featured image: Ahead of a potential massive strike this week, Chicago teachers are pushing the limits of social justice unionism. , (Photo by Scott Heins/Getty Images) 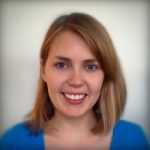 Rebecca Burns is an award-winning investigative reporter whose work has appeared in The Baffler, the Chicago Reader, The Intercept and other outlets. She is a contributing editor at In These Times.

Rebecca Burns is an award-winning investigative reporter whose work has appeared in The Baffler, the Chicago Reader, The Intercept and other outlets. She is a contributing editor at In These Times.