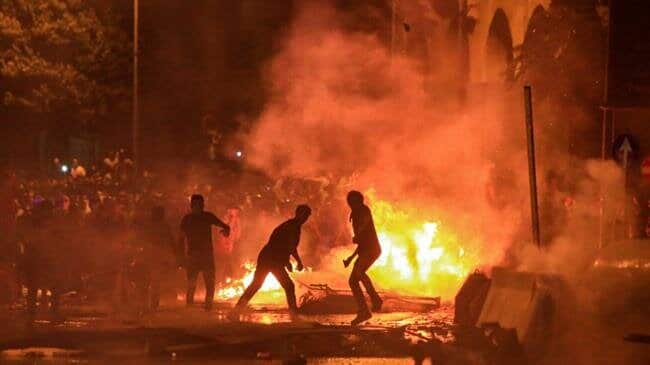 Secretary General of the Lebanese Hezbollah resistance movement Sayyed Hassan Nasrallah has warned that foreign elements and certain political parties are seeking to “exploit” recent protests in Lebanon and “create a political vacuum in the county.” But who are these voices of chaos in Lebanon?

“Some protests have been financed by embassies and suspicious sides. Certain elements are seeking to stir political tensions in Lebanon in a bid to create political vacuum in the country,” Nasrallah said on Friday, warning that certain factions seek to take the country to “civil war”, a reference to the country’s bloody 1975-1990 civil war.

Nasrallah, nonetheless, did not elaborate what political parties and foreign entities may be seeking to divert the major anti-corruption and economic protests which have continued for ten consecutive days.

The Hezbollah chief had previously lauded the protests as being initially “spontaneous” and independent from any foreign or domestic political influence.

“O’ American, listen, listen:
My country’s people will not kneel
Neither to sanctions or siege
Nor to colonial schemes!”

Lebanese protestors in front of the central bank tonight.pic.twitter.com/8CR7SeLFHz

Remarks similar to those by Nasrallah have been echoed among other Lebanese figures in recent days.

Similarly, the leader of the Arab Tawhid Party, We’am Wahhab said that “foreign elements” were seeking to pressure Lebanese Prime Minister Saad al-Hariri to resign and dissolve the government.

Nasrallah has said the government’s resignation is a “waste of time”.

New elections and the consequently timely formation of a new government will ultimately include the same combination of Lebanon’s various political parties already present in the cabinet, failing to address Lebanon’s “systematic” problems and further destabilizing Lebanon, Nasrallah has argued.

Certain factions among Lebanon’s political elite have, nonetheless, openly called for the resignation of the current government.

RELATED CONTENT: The US Led Coup Attempt In Iraq May Further Weaken That Country

Samir Geagea, leader of the Lebanese Forces parliamentary bloc, was one of first Lebanese figures to call for Hariri to resign. He ordered his party’s four ministers in Hariri’s cabinet to submit their resignation last week.

Geagea and his party are known to have close links with Washington and Riyadh. During Lebanon’s bloody 1975-1990 civil war, Geagea led the Lebanese Forces militia which formed an alliance with Israel.

The militias are known to have facilitated the infamous Sabra and Shatila massacre in Beirut, which lead to death of up to 3,500 civilians from Palestinian and Lebanese Shia backgrounds.

In 1994, Geagea was found guilty of ordering four political assassinations, including the killing of PM Rashid Karami in 1987 and the unsuccessful attempt on the life of Defense Minister Michel Murr in 1991 while cooperating with Israeli intelligence.

Geagea was consequently held in solitary confinement in a cell below Lebanon’s defense ministry building in Beirut before being released in 2005.

Leader of Lebanon’s Progressive Socialist Party Walid Jumblatt is also another prominent political leader in Lebanon to call for new elections in Lebanon. His party currently has two ministers in the Hariri government.

Jumblatt is known to switch political affiliations and political positions in whatever way best suits his political agenda.

The politician, once an ardent backer of Syrian government, expressed tacit support for terrorist groups like the al-Qaeda-lined al-Nusra Front during the height of a foreign-backed terrorist insurgency against Damascus, effectively siding with Riyadh and Tel Aviv’s shared objective of ousting the Syrian government.

With US and Saudi-backed terrorists in Syria all but defeated after more than eight years of war, observers say a similar scenario may be pushed upon Syria’s southern neighbor of Lebanon.

Featured image: Lebanese demonstrators stand by a fire near a makeshift barricade during clashes with security forces at a mass protest in Beirut on Oct. 18. (Photo by AFP)