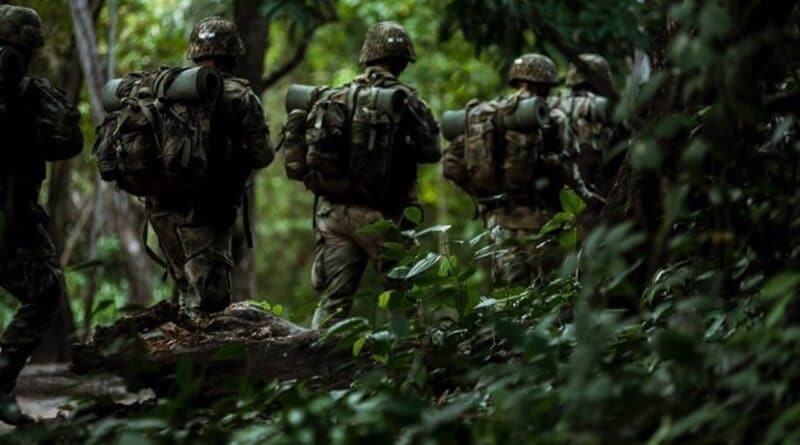 A contingent of 14,000 soldiers was sent by the government of Iván Duque to Colombia’s border with Venezuela, specifically to the Norte de Santander region, which includes areas bordering the state of Táchira in the Venezuelan Andes.

The announcement was made by Colombian Defense Minister Diego Molano [a cousin of one of the killers of Haiti’s President Jovenel Moïse], who assured that the measure represents a new stage of combat against irregular armed groups operating in the area which he identified as alleged “FARC dissidents.”

After hearing the pronouncement of the armed group—that identified itself as the Magdalena Medio bloc of FARC-EP dissidents—Colombian president Iván Duque claimed, without any evidence to support the assertion, that the group was operating from within Venezuelan territory, and proceeded to mobilize 14,000 soldiers.

Doubts about Colombia’s narrative
Since the beginning of the alleged Colombian investigation of the “bombazo” in Cucuta against the 30th Army Brigade, and the alleged gunfire attack on Iván Duque’s helicopter, the main suspect has been retired Army Captain Andrés Medina Rodríguez. However, according to the Venezuelan website La Tabla, this retired officer held relevant posts in anti-FARC operations, and after retiring joined the security team of Cesar Rojas, former major of Cúcuta, an area under the control of paramilitary groups.

RELATED CONTENT: US Military Denounced for Violation of Venezuela’s Airspace

In a series of posts on Twitter, La Tabla argued that, after analyzing Medina Rodriguez’s background, there was no logical connection between the retired officer, accused now of masterminding both terrorist events, and Colombia’s FARC-EP guerrilla movement. The prestigious Venezuelan news outlet went beyond this conclusion, and questioned the logic of the alleged Magdalena Medio Bloc video and the narrative of Colombian authorities regarding retired Captain Andrés Medina Rodríguez.

What Iván Duque is looking for
According to the publication of the Colombian Defense Minister, Diego Molano, Iván Duque’s instruction was to create, with the assignment of those 14,000 combatants on the border, the so-called Specific Command of Norte de Santander.

In this sense, the official claimed that they sought “to dismantle the 33rd Front of the FARC-EP dissidents”—the same group that the president assures is operating from the Venezuelan side of the border. However, they did not offer details about the operations they hope to undertake in the region.

In addition, when denouncing the attack on the presidential aircraft last month, Minister Molano asserted that “it is clear that this attack against the president was planned from Venezuela.” For this reason, he accused the government of President Nicolás Maduro of responsibility for the act, and of “protecting terrorists who continue to attack Colombian institutions.”

For its part, the Venezuelan government presented evidence and testimonies that resulted from the dismantling of paramilitary groups and criminal gangs in the Cota 905 area, in Caracas. These elements linked the Colombian government with the supply of arms, and complicity with the conspiratorial plans of Venezuela’s right-wing extremists. In addition, links with Colombian actors have been confirmed in the terrorist plots organized on Colombian territory including the attempted drone assassination of President Maduro in August 2018, Operation Gideon on May 2020, and acts of terrorism launched from Colombian paramilitary groups in Apure state that took the lives of more than 10 Venezuelan soldiers and officers throughout the course of 2021.

Iván Duque’s accusations bring to mind his accusations issued before the United Nations in 2019, when he presented photographs to “prove” the alleged presence of irregular groups in Venezuela. A few hours later, upon close examination it was shown that the images were actually taken in Colombia.

Featured image: Colombian soldiers in the jungle. File photo courtesy of the Colombian Ministry for Defense.