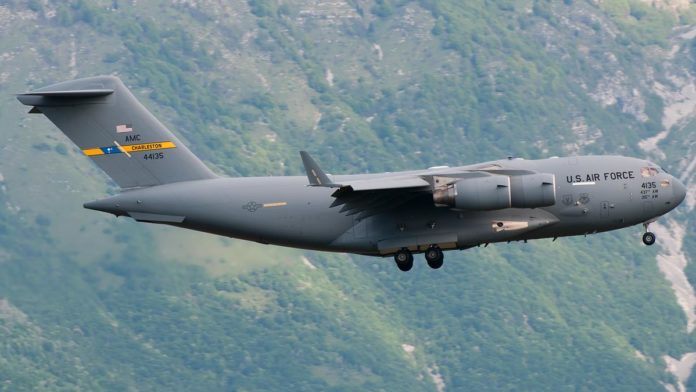 Through a statement published this Friday, July 23, the Bolivarian National Armed Force (FANB) denounced the violation of Venezuelan airspace by a Boeing C-17 Globemaster III heavy military transport aircraft belonging to the United States Air Force. According to the statement, the incident occurred last night, Thursday, July 22, from 8:47 p.m. until 8:50 p.m., when US aircraft covered approximately 14 nautical miles over the westernmost area of ​​the Sierra de Perijá mountain range in Zulia state.

The FANB statement expressed the opinion that this action by the US Army constituted a flagrant provocation, as it occurred within the context of joint military exercises carried out by the Colombian Air Force and Army, in the departments of Antioquia and Cundinamarca, respectively.

The Venezuelan Armed Force determined that United States F-16 and RC135 fighter jets are used for strategic exploration in the region. “It should be noted that so far in 2021, North American aircraft have also violated the Maiquetía Flight Information Region (FIR) on 21 occasions, leading to a serious violation of international aeronautical standards,” read the statement.

An international complaint
It should be recalled that there are territories in Colombia that serve as US military bases and, according to the Venezuelan military force, represent a permanent threat and an egregious interventionist presence that significantly affects the stability of the Caribbean and Latin American region.

In addition, through its intelligence work, Venezuela is aware that as part of the aforementioned military exercises, reconnaissance tasks are being carried out in Venezuelan geographic space. For this reason, the military did not rule out other possible hostile actions that would threaten Venezuela’s sovereignty and territorial integrity.

For his part, the Venezuelan Defense Minister Vladimir Padrino López spoke out about the incident. “I categorically reject the violation of our sovereign airspace by a US military aircraft,” he wrote on official social media accounts. “This occurs when Iván Duque slavishly hands over the sovereignty of the Colombian people to foreign military bases. It is a serious threat to the entire region.”

More provocation flights near Venezuelan border
In addition, it was also disclosed on social media that a Boeing RC-135V Stratotanker (R135) REG 64-14843, serial number (MSN) 18783, was spotted on Thursday, July 22, travelling on a clearly provocative flight path over the border with Venezuela from Zulia state to Apure state.

This plane, according to the Patriota Cazador account (@PCazador2021) on Twitter, took off from Lincoln, Nebraska, and left for Colombia, flying along the borders of the Venezuelan states of Táchira and Zulia. According to the air tracking portal CNW (@ConflictsW), the aircraft spent several minutes flying over Colombian border territory with Venezuela, carrying out “reconnaissance operations.”

“The USAF reconnaissance plane spent four hours orbiting next to the Zulia border last night,” wrote CNW. “It did multiple passes along the border, not sure what it was looking at but it was interested in something.”

Featured image: A Boeing C-17 Globemaster III similar to the one that violated Venezuelan airspace. Photo courtesy of Boeing.