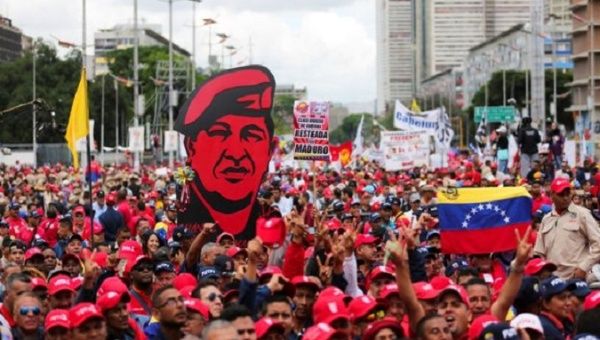 Despite the dramatic economic crisis and the constant political conflict in Venezuela, there still is a significant proportion of the population that consider themselves to be “Chavistas.” Ed Augustin examined some of the reasons for this in Caracas.

There’s no flour, no rice, no pasta!

Over the past five years Venezuelans have gone through one of the harshest declines in living standards in Latin American history. There are things in the shops but hyperinflation has wiped out people’s purchasing power. Yet in the 23rd of January neighbourhood in Caracas most voters still support the government Are they nuts?

Here’s my picture of El Comandante. Chavísmo is strong here, but people don’t love Maduro so much. Yes, we are living through a crisis. But the crisis is economic, not humanitarian. We have an economic crisis because of the sanctions. Ever since Maduro started [the opposition] hasn’t allowed him to govern. There are also corrupt people around him. And we’ve criticized this.

94.7fm! The station that gets Caracas moving! This is one of the achievements we’ve had with the Revolution. Thanks to El Comandante we can communicate in emergencies. This is one of the first community radio stations that was set up in Caracas to play salsa.

People here say Hugo Chávez was the first president to ever care about them. His government invested in people like never before. It built sports grounds, community centers and schools. Josefina Diaz learned to read at the age of 63.

And what do you think of him?

Oh yes! We feel bad that he’s gone. But we’re still with him. Now I’ve studied. Now I can read and write. I can do addition and multiplication. Thanks to him.

She didn’t have the means. And no government before gave illiterate people the chance to read. It was Chávez who invented these things.

He put teachers there so I studied and when I arrived at the school I started to cry.

Ascención Oropeza had her sight restored. She remembers how twenty years ago healthcare just wasn’t available for most people.

You’d wait years for an operation that would never happen. But when Chávez arrived it was like a hurricane. Loads of people were operated on every day.

There was just one health clinic in the neighborhood before; today there are five. Plus, over forty doctors are distributed throughout the barrio to provide primary care.

Does the average Venezuelan have more access to healthcare than 20 years ago?

Yes. They have more access because before there were no general hospitals here. There are now high-tech centres where patients receive MRI scans, mammography, and other specialist treatments which they didn’t receive before. Here you get seen for free but back then you had to pay. So despite the blockade, healthcare for the population is free. Even though there are deficits, there’s more access today. We give patients prescriptions that they take to state pharmacies. And they receive their medicine at no cost. Pregnant women receive supplements: folic acid, iron and calcium.

Do you have folic acid and calcium right now?

Yes. I picked up the pills in February in the state pharmacy. And there are still some left.

But there are big medicine shortages and people once again have to go to private pharmacies or the black market to get hold of treatments.

When Chávez was in power and up until about 2016 healthcare was good. But because of the economic crisis and the sanctions – the Obama sanctions and other sanctions – there is now a health crisis. You can’t get hold of lots of medicines and because of the blockade, millions of dollars that were assigned to buy medicine have been seized by the US and the EU. Our accounts have been blocked so we can’t pay for many medicines.

The crisis also plays out in nutrition. The minimum wage has crumbled to the equivalent of just $6 a month. People are only eating because the government offers everyone access to food at knock down prices.

Because of the economic war against us most people can’t afford basic foods. So the government has set up socialist fish fairs which sell fish to the community at solidarity prices so people can afford it. A kilogram of mullet sells for 6,500 sovereign bolivars ($2), whereas in a capitalist marketplace it goes for around 15,000 sovereign bolivars ($4).

I’ve bought a kilo of skate. It will make a lovely lunch with some cassava and salad.

There are plenty of people in this barrio who want the government out. And even the most loyal say in recent years it’s become harder to tell the truth.

If you talk frankly and irregularities and corruption – and there are ministers who have mad constructive criticisms – but there are people who don’t like this and so if you criticism forcefully they brand you a “counter-revolutionary”.

Lots of chavistas say they feel let down. But for now they’re sticking with the government, bound by the legacy of one man, and the conviction that a right wing government would roll back the gains that remain.

We can’t lose the legacy of what we achieved in the Revolution by allowing someone else to get rid of them. We can’t allow someone else to come along and boss us around in our own house.

The economic situation is trying for people in this neighborhood. People are broke and say their diet had gotten worse in recent years. Yet life rolls on, and on Friday nights hundreds still come out to hit the domino and the dance floor. Ed Augustin, Real News, Caracas.