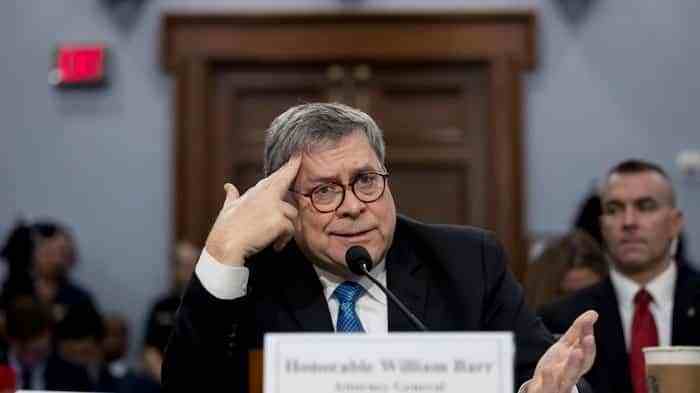 Both statements are outrageous lies.

In the midst of a pandemic, Barr announced a $15 million reward for the capture of the democratically elected Venezuelan president. Ten million dollars was offered for the leader of the country’s Constituent Assembly, Diosdado Cabello.

Barr heads the same Justice Department that refused to bring federal civil rights charges against the cop who strangled Eric Garner, whose last words were, “I can’t breathe.”

Barr’s news conference featured a wanted poster for President Maduro. The only thing missing on it were the words “dead or alive.”

Venezuela’s leader denounced these “racist cowboy methods.” President Maduro said that his country “had record numbers of drug busts in the past 15 years, ever since we got rid of the [U.S.] Drug Enforcement Agency.”

If the capitalist government was honest about who’s flooding the U.S. with drugs, it would have indicted itself.

The 2017 hit movie “American Made,” starring Tom Cruise as the number one drug smuggler, Barry Seal, missed a key detail. When Seal was murdered on Feb. 19, 1986, he carried the personal phone number of then vice president, George Herbert Walker Bush.

The son of a Ku Klux Klan member, Seal was a longtime pilot for the CIA and Trans World Airlines. As a teenager, he was in the Civil Air Patrol with JFK assassination figures Lee Harvey Oswald and David Ferrie.

Some believe Seal is seen with future CIA director Porter Goss in a famous picture of “Operation 40” members. This was a CIA unit that organized terrorist actions against socialist Cuba. (See “Barry and the Boys” by Daniel Hopsicker.)

Barry Seal flew a plane equipped with CIA cameras into Nicaragua in an attempt to frame the revolutionary Sandinista government on drug charges. This scheme fell apart with the Wall Street Journal reporter Jonatham Kwitny showing there was no link between any Nicaraguan official and the staged drug shipment.

The current charges against leaders of the Bolivarian Republic of Venezuela are just as phony.

Barry Seal was conveniently rubbed out months before the Contra-gate scandal broke out. On Oct. 5, 1986, CIA mercenary Eugene Hasenfus was shot down over Nicaragua.

Hasenfus confessed that he was dropping off supplies to Contra terrorists trying to overthrow Nicaragua’s government. According to the late Father Miguel D’Escoto, who was Nicaragua’s foreign minister, the Contras murdered 30,000 people.

Elliot Abrams was the Reagan administration’s godfather for all the U.S.-backed death squads in Central America, including the Contras. Today, this war criminal is the point-person for Trump’s undeclared war against Venezuela.

After Vietnam, people in the U.S. didn’t want another dirty war. The House of Representatives prohibited aid to the Contras.

The crack epidemic devastated Black and Latinx communities. It served as an excuse for the prison population increasing seven times between 1980 and 2020.

Courageous journalist Gary Webb exposed this CIA drug pushing in his newspaper series “Dark Alliance.” Webb was run out of journalism for telling the truth and driven to suicide, as seen in the 2014 film “Kill the Messenger.“

In 1972, the CIA tried to block the publication of “The Politics of Heroin of Southeast Asia” by Alfred W. McCoy. This classic work revealed the vast CIA drug running operations in Southeast Asia that flooded Black and Latinx communities with heroin. Transporting this poison was CIA front Air America with 20,000 employees.

The FARC has been leading a struggle against the death squad regime in Colombia for almost 60 years. Even after a peace agreement was signed in 2017, hundreds of labor and community activists have been murdered.

Colombia produces an estimated 43 percent of world cocaine production. That’s a good reason why the government is receiving $10 billion in U.S. military aid over 15 years.

The drug charges against President Maduro and the FARC leaders are phony but dangerous. They could serve as an excuse for U.S. military intervention against the Bolivarian Republic of Venezuela. U.S. hands off Venezuela!