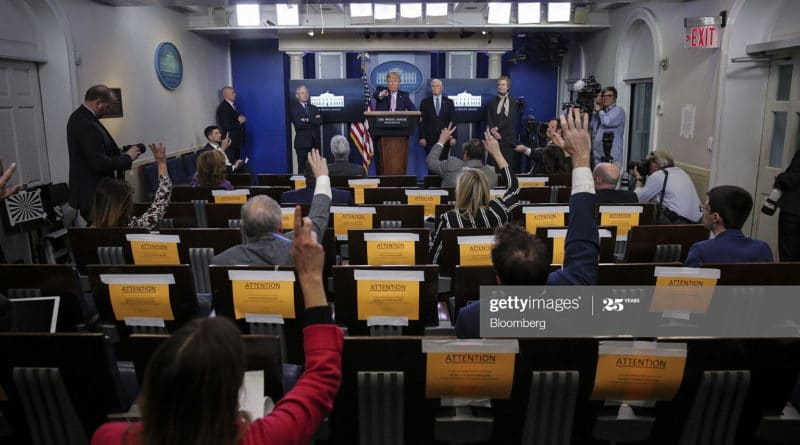 In a communique read by minister of communications Jorge Rodriguez, the Venezuelan government rejected the attacks on national sovereignty by U.S. President Donald Trump and other US officials, saying it “intends to attack Venezuela with infamies and threats” to divert attention from the humanitarian crisis facing the US people as a result of the spread of the Covid-19 coronavirus in that country, which has more than 214,000 cases and more than 5,100 deaths.

The communiqué also points out that the Venezuelan government sees it as a positive aspect that the US has decided to protect its [own] borders, an area that has historically been neglected and violated, becoming a stronghold for the entry of drugs from the Colombian drug trafficking industry.

Venezuelan Chancellor, Jorge Arreaza also made pubic the communique using his twitter account: “Venezuela rejects the infamies professed by Trump’s security cabinet against the Bolivarian government. However, it salutes the US for finally taking action to protect its vulnerable and neglected borders from drugs originating from Colombian trafficking,” he posted along with the document.

#COMMUNIQUÉ | Venezuela rejects the infamies professed by Trump's security cabinet against the Bolivarian Government. However, but salutes that the US finally takes action to protect its vulnerable and neglected borders from drugs originating from Colombian trafficking pic.twitter.com/mrXpbkohIt

Rodriguez, in reading this document, stressed that Venezuela has a “robust anti-narcotics institution that is ready to collaborate and coordinate actions to contain the advance of drug trafficking and crime groups in the region.

This Wednesday, US President Donald Trump announced that his country will deploy ships of the Southern Command in the Caribbean Sea, in waters close to Venezuela, supposedly to prevent drug smuggling.

Trump made the announcement during a press conference at the White House, originally raised by the issue of the coronavirus, in which Defense Secretary Mark Esper and Chairman of the Joint Chiefs of Staff Mark Milley were also present. Trump said the US Navy will deploy ships to the Caribbean and the Eastern Pacific in an action “with cooperation from 22 partner nations (unnamed).

Esper accused the Venezuelan government of allegedly profiting from the sale of narcotics, which is why the U.S. operation will focus on the Caribbean and particularly on Venezuela.

Maduro said: “All the questions (from the journalists at Trump’s press conference) were about the humanitarian crisis in the United States, because Donald Trump and the head of the Pentagon tried to divert attention today, creating an escalation of statements against Venezuela. They have not succeeded and will not succeed!

The Venezuelan head of state said that the journalists asked Trump around 15 questions, “all about his responsibility” in the crisis over Covid-19. Maduro said that “a journalist asked him, ‘Aren’t you responsible for having underestimated this crisis? Aren’t you responsible for these deaths (by Covid-19), and the 200,000 or 300,000 deaths that you yourself are announcing? Nobody asked them about the Pentagon announcement,” said President Maduro. President Maduro explained that the drug consumed in the United States is not produced by Venezuela. “Venezuela has a world record in combating drug trafficking,” said the head of state. “If they want to monitor drug trafficking, of the cocaine that Colombia produces, they have to work in the Pacific Ocean. If they go through the Caribbean, they are leaving the real drugs routes free,” he explained.

Bolivarian Government repudiates threats by Donald Trump against Venezuela to divert attention to the Covid-19 crisis
The Government of the Bolivarian Republic of Venezuela strongly rejects the statements made by Donald Trump, his Secretary of Defense, his Attorney General and other members of his security team, who in an desperate attempt to divert attention away from the tragic humanitarian crisis that country is experiencing as a consequence of the erratic handling by its authorities of COVID-19, pretend to attack Venezuela with infamies and threats.

However, despite the aggressions and lies displayed against Venezuelan officials, the Government of the Bolivarian Republic of Venezuela salutes that for the first time in decades, the authorities of the United States are willing to take action to safeguard their borders, historically permeable, neglected, and vulnerable to the thousands of tons of drugs that annually enter that country, originating in the drug trafficking industry that has developed in the territory of its ally and close partner, Colombia.

The robust anti-narcotic institutions that Venezuela relies upon, is ready to lend any necessary cooperation and coordination aimed at containing the advance of drug trafficking groups and organized crime in the region.

Featured image: Journalists ask President Donald Trump questions on April 1, 2020 at the White House, during a Coronavirus Task Force press conference in which Trump also made announcements about the deployment of the Southern Command in the Caribbean Sea. Photo: Oliver Contreras / SIPA / Bloomberg via Getty Images