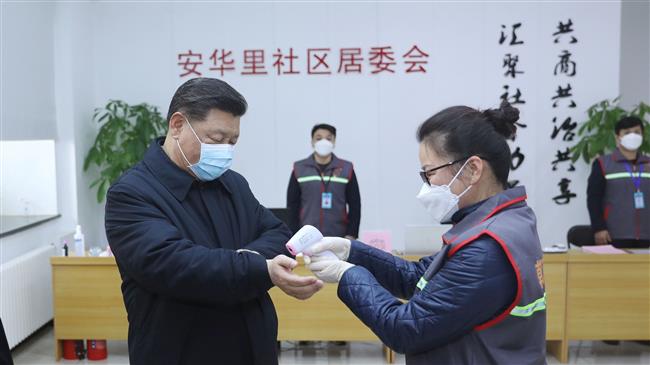 Chinese President Xi Jinping has expressed his “sincere condolences” to Iran over the coronavirus outbreak, saying Beijing is ready to assist Tehran contain the disease.

During a phone call on Saturday, Xi offered his condolences to Iranian President Hassan Rouhani over the loss of lives, saying China will continue to provide as much assistance as it can to Iran in order to contain the disease.

He stressed that China and Iran are “comprehensive strategic partners” and the two peoples enjoy traditional friendship.

President Xi said the Iranian government and people offered sincere and friendly support and assistance to China when the virus first emerged in the country.

“To help Iran fight the epidemic, China has sent materials and medical experts to Iran,” he said. In February, Iran sent two million protective face masks – the equivalent of one day of the country’s total mask production – to help China address its needs in countering the spread of the coronavirus.

In a tweet on Saturday, Iran’s Foreign Ministry spokesman Abbas Mousavi pointed out that many countries have sent cash and medical equipment to assist the Islamic Republic in its fight against the coronavirus outbreak.

He said the Iranian government and people will never forget their friends of hardships.

China appears to have passed the peak of the coronavirus outbreak, with figures showing a big drop in new cases in the country.

The Asian powerhouse has been taking strict measures since the outbreak began, including locking down Wuhan, a city of roughly 11 million people, which appears to have paid off.

The disease emerged in Wuhan, the provincial capital of Hubei, late last year and is currently affecting 1491 countries and territories across the globe. It has so far infected over 147,000 people and killed more than 5,500 others.

The World Health Organization has declared the coronavirus outbreak a global pandemic.