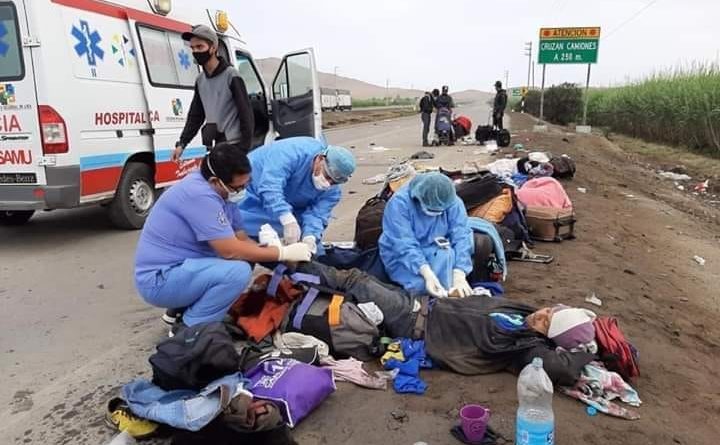 The driver of a truck in Peru ran over a group of 12 Venezuelan migrants on their walking journey back to Venezuela, while they slept the morning of this Friday, May 1. The incident caused three deaths.

The events occurred between 5:00 and 5:30 am on the shoulder of the Panamericana Norte highway in Paramonga, Peru. The truck driver ran from the crime scene.

The group was resting from the long walking journey, meant to try to return to Venezuela through Ecuador and Colombia, according to social networks.

In a viral twitter video, a Venezuelan says that there were 8 affected and that one of the walkers had died. Venezuelans migrants are fleeing harsh economic conditions in Peru, Colombia and Ecuador, along with increasing xenophobic incidents, most of them are returning to Venezuela.

Animosity and xenophobia have been fed by national and local authorities in thoes countries. In Peru a few months ago, the President himself supervised several deportation flights of Venezuelans, adding to the hate and xenophobic campaign.

At around 1:30 pm this Friday, Daniel Regalado, president of the Venezuelan Civil Association in Ecuador, reported: “There were 12 people, the deceased are two men and one woman. Four Venezuelans are in the operating room for presenting fractures in their legs. An injured man, named Nelson, said that the tragedy, which occurred on a closed road, was noticed by a motorcyclist and he was the one who notified the authorities. The wounded were transferred to a Barrancas hospital, near Paramonga. Nelson was told that he will be discharged this afternoon.”

Regardless of Regalado’s comments, an alleged official list made public on Twitter refers to 8 Venezuelan affected and stated clearly that the truck driver ran from the scene.