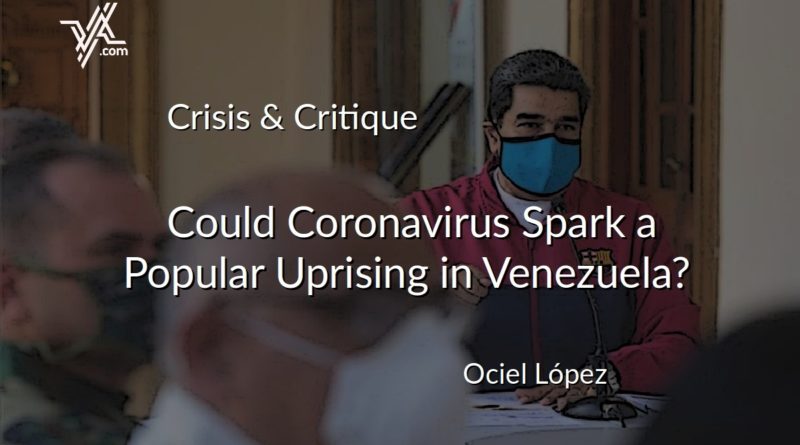 López looks at the political and social implications of Venezuela’s economic crisis, which is being exacerbated by the tightening US siege and the COVID-19 lockdown.

Venezuelan President Nicolas Maduro’s bump in his approval rating – a result of his effective early response to the COVID-19 pandemic – is rapidly fading. The government’s overemphasis of the threat posed by the virus as a means of lowering tensions in the face of the deep crisis of gasoline shortages is losing popular support.

The economic situation has reverted to the worst years of the crisis in 2017 and 2018. The public is demanding a normalization of activities in order to minimize the economic fallout of the pandemic, which has revived the scourge of hunger and is becoming a catalyst for unrest.

And the worst part is that after two months the coronavirus is becoming a tangible threat due to the mass return of Venezuelans from many countries hard hit by the pandemic, including Ecuador, Peru, and Brazil. The Venezuelan popular classes’ main source of income – remittances – has been severely reduced and will remain so until economic activity resumes in those countries. Trump and Bolsonaro are definitely not the only world leaders in dire straits. The Venezuelan government has stepped into a minefield that could explode even without US military intervention, which now seems like a more distant possibility.

Before beginning an analysis on the basis of simplistic political calculations, we should recall that Maduro has successfully defused other minefields in order to secure temporary relief. However, the current situation is more complex, with several new elements in play. Are the new conditions sufficient to produce a definitive change in the correlation of forces and oust Maduro?

During the third week of April, protests broke out in diverse parts of the country, including Upata (southeast), Cumaná and Margarita (east), Maracaibo and Barquisimeto (west), and Valles del Tuy (north-central). The rising cost of food appears to be the main factor. Videos circulated on social media showing looting, confrontations with police and military resulting in gunshot wounds, marches, and overall tumult. All of this occurred in spite of the national quarantine restrictions.

In the face of the worsening economic situation, with a minimum wage that was just raised to $4, coupled with intentisfying gasoline shortages, we might posit that Venezuela is a timebomb that could explode at any moment, sparking a social explosion [on a scale not seen since the 1989 Caracazo uprising].

Nevertheless, this is not the only possible scenario. And even if it were to materialize, such an insurrection need not be enough to bring about the definitive destabilization of the government and consequent regime change.

When the pandemic began to decimate the United States, Trump decided to escalate the aggression against Venezuela, tightening the blockade, putting a price on Maduro’s head, and even dispatching a naval expedition to the Caribbean to “fight drug trafficking.”

On top of that, Russian energy giant Rosneft sold its Venezuela holdings to an unknown firm directly owned by the Russian state. However, it appears that that company has yet to take on Rosneft’s role in aiding Venezuelan state oil company PDVSA avoid US sanctions by purchasing its crude and rerouting to other destinations – denying Venezuela essential funds for purchasing gasoline and other imports. Sanctions have also caused the termination of PDVSA’s agreements with Indian refiners, in which it would swap oil for gasoline and diluents.

The situation, which was already critical in many regions of the country, became generalized, with fuel shortages even paralyzing large sections of the capital. There is barely enough fuel for heavy freight used in food transport and some public transit, which has been only partially operating due to the quarantine. Venezuela is heavily dependent on gasoline as it never developed a railroad network, relying on trucking to transport food and other basic goods.

But fuel shortages are not the only factor aggravating the crisis. As Venezuelans of all social classes began to migrate in 2016, remittances started flowing into the country, alleviating the effects of the economic crisis for many families, especially those from the popular sectors whose relatives went to Peru, Chile, Ecuador, and Colombia. According to some outlets close to the government, remittances have become Venezuela’s main non-oil revenue source, and some analysts predicted that the total volume would reach $6 billion in 2020. This new income reached all classes of Venezuelan society, providing poorer families with greater economic independence from the state, which for decades has been the largest employer.

However, once Venezuela’s neighbors went into lockdown, many Venezuelan migrants – who often took up the most precarious jobs in the workforce – lost their jobs, their homes, or have significantly lost income, curtailing their ability to send remittances.

Naturally, the impressive fall in oil prices will have a huge impact on the Venezuelan economy, and the state will surely see its liquidity problems worsen. This could result in a collapse of the government’s subsidized food programs on which the poorest sectors of the population rely.

Amid these explosive factors, the pandemic was an excellent opportunity for Maduro to demonstrate that he actually governs, in contrast to Guaido, who never knew how to face this situation. Following his meetings with Trump and other world leaders in January and February, he was forced to simulate his presidency even though he had no means to actually exercise it. While opposition leaders everywhere complain, criticize and demand certain measures, Guaido was churning out decrees with very little credibility. As a result, there is a vacuum in which no opposition leader is in a strategic position to capitalize on discontent and move towards taking political power.

Maduro’s wager was to overplay the coronavirus card, taking advantage of the global panic. However, four weeks later and with economic reality biting hard, people have started to react in many ways against the economic situation which is much more pressing than the pandemic. As of April 28, there were only 10 deaths due to the virus, almost all of them from middle and upper classes, having contracted the virus while traveling through Europe. At the end of the day the virus is a headline grabber, whereas hunger is real. If we recall other epidemics, such as dengue or chikungunya, of which no statistics of their impact are known, it was also popular sectors who largely bore the brunt of them. But they were overcome without these radical measures.

But it could get worse, because the coronavirus has morphed into a real threat with the arrival of Venezuelans from the region’s pandemic hotspots: Brazil, Ecuador and Peru. Even though the government has established important quarantine protocols to neutralize the threat, the expansive border riddled with illegal crossing points can spread the virus right at a time when the population wants the measures to be eased and the economy reopened. This is something that has already started to happen officially, with examples such as allowing children and seniors to go out once a week, and non-officially with the non-repression of some work activities.

All bets are in

All bets are in for this social explosion roulette. The question is how a hypothetical final uprising against the government might take shape. But the truth is that this seems far from happening, at least in a coordinated fashion and with a political direction. For now, the protests and lootings are not coordinated, or centrally planned, and no political actor is in a position to take advantage of the situation and change the correlation of forces.

The minefield the government is going through can still be defused in many ways, and Maduro has proved himself an expert in this kind of adventure.

At the moment he is getting international assistance, even if conjunctural, from allies such as Iran to tackle the fuel shortages and try and restart some refineries. On this subject, the government, paradoxically, benefits from low global oil prices. Secondly, Maduro still has room to maneuver to bring the virus under control and respond quickly to outbreaks, thanks to help from China and Cuba. Thirdly, as economies in Ecuador, Peru, Colombia and Brazil start opening up, even if they increase healthcare risks, Venezuelan migrants have a chance to stabilize and start sending remittances once more. And finally, gold continues trading high, and this has become an important source of revenue for Venezuela.

These are the factors that may allow the government to defuse the minefield and buy time. Buying time has always been Maduro’s strategy in similar circumstances, allowing him to ride out onslaughts such as the 2014 and 2017 anti-government insurrections to remain in power.

The government’s firm control of the armed forces and the police remains key. Maintaining this support becomes easier whenever there are international attacks, including renewed sanctions and now drug charges against those who could eventually break the chain of command.

Therefore Maduro is facing his most challenging scenario, but he also has tools at his disposal to defuse the minefield and continue finding pathways for the government to remain in power.

Nevertheless, there are also serious risks. There is a good chance we might see an upsurge of lootings and street protests; we could witness new displays of discontent among the armed forces or police, even new US sanctions. But this trickle of threats is not necessarily sufficient to remove Maduro and could serve, like in 2017, as an escape valve for discontent.

For the moment, the only option for the opposition is to build a movement to capitalizing on discontent to press for new elections, perhaps in one or two years. If it impatiently discards this option, the opposition basically closes the door on any regime change possibilities. It does not seem likely that this change will be simply triggered by radical, uncoordinated, visceral street actions that end up being rejected by the traditional opposition sectors and its main backers: the business sector. Of course, the situation is fluid, always full of surprises, and the explosive elements at hand can be set off by a deadly spark.

For his part, if Maduro can successfully navigate this minefield he will have no need to make any concessions and it will be clear sailing to remain in power at least until the 2024 presidential elections.