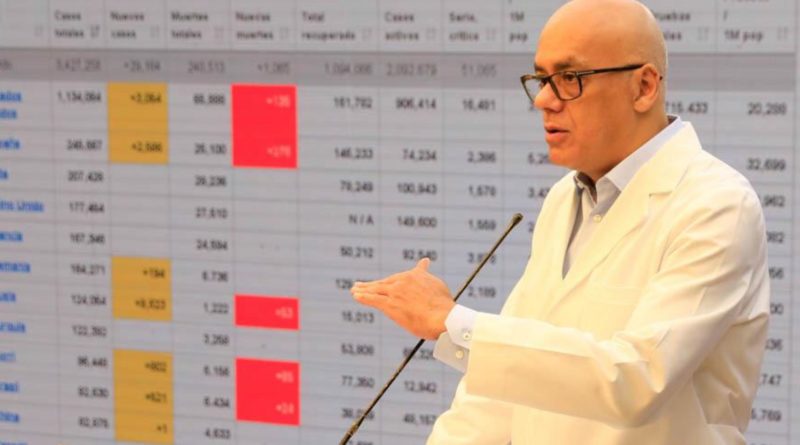 In the last 24 hours, 10 new positive cases of Covid-19 were registered in Venezuela to raise the total number of infections to 345, while the recovery rate stands at 42.9% with 148 recovered patients, after receiving free treatment.

The information was made public by the minister of communication, Jorge Rodríguez, from Miraflores Palace at the end of the customary meeting of the Presidential Commission for the Control and Prevention of Covid-19, from which he specified that eight of the new cases of contagion are the result of the outbreak registered in the Pedro González sector of the Gómez municipality of Nueva Esparta state (Margarita island), 1 is a resident of the Miranda state and another of Táchira state.

He added that of the new cases, a total of 9 are the product of community contagion, while the health authorities are still studying the transmission chain of the other case registered in San Cristóbal because the patient says that she has not made any trip abroad. Of these 10 new infections 6 are women and 4 are men.

“The outbreak in the Nueva Esparta state still very much persists,” he warned, not without first recalling that the government had issued a curfew measure to protect the population.

Rodríguez described that of the 187 active contagious cases: 95 are in hospitals, 69 in Comprehensive Diagnostic Centers (CDI), 23 in private hospitals, while the deceased remain in 10.

The minister specified that Nueva Esparta remains the territorial entity with the highest number of registered cases with 108, followed by Miranda with 91 and two deceased; the Capital District with 32 cases and 4 deceased; Aragua with 31 and 1 deceased, Táchira with 19 recorded and La Guaira with 14 cases.

He explained that as of this Saturday, 112 of the patients with active cases are asymptomatic, all of them confined in health centers to avoid intra-family contagion; 70 have mild respiratory failure, 3 have moderate respiratory failure and 2 patients are confined to Intensive Care Units. “Although we cannot claim victory, we have seen a slight improvement in critically ill patients,” he said.

He added that the effectiveness of pandemic control in the country is due to the massive application of the tests, along with measures of social distancing, quarantine, the use of masks, extensive and personalized screening with visits to more than 200,000 homes looking for people with symptoms suggestive of Covid-19 infection, the hospital infrastructure and the free therapeutic arsenal that Venezuela has.

Description of new cases of infection in the last 24 hours:

1) Female, 34 years old, resident of San Cristóbal, Táchira state, worker at a hospital center, the patient reports that she has not had any trips abroad.

3) Female, 25 years old, Nueva Esparta, infected by being a relative of a Coast Guard officer in Nueva Esparta, derived from the hotspot of the Baseball Academy.

Additionally, 5 relatives of the young prospect signed by a team of Major Leagues of the Baseball Academy in Nueva Esparta were detected, the cases are currently located in the Marcano municipality of Nueva Esparta, although they originate from Barlovento, Miranda state.