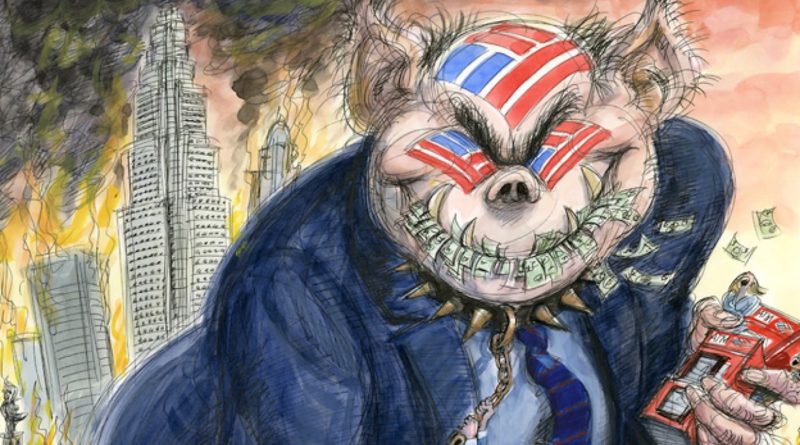 What started as an assault on Venezuelan accounts in Citibank ended in the distribution of loot among the most emblematic actors of anti-Chavismo.

The money recently self-allocated by anti-Chavista parliamentarians comes from some of the billions in Venezuelan assets frozen abroad by the Trump regime and its allied governments, much of which comes from oil sales and CITGO profits.

This is the assault on assets of the Venezuela Central Bank (BCV) in US based Citibank, transferred to another non-Venezuelan account in the New York Federal Reserve.

It is possible that the US elite has grown tired of seeing Guaidó and the local coup coalition squander the funds allocated for regime change, which is why they have taken a step forward to centralize the management of resources kidnapped from Venezuelans.

When your media allies take the lid off

Both Joshua Goodman, of The Associated Press (AP), and Orlando Avendaño, of the ultra right-wing media PanAm Post, have described how the deputies of the National Assembly (AN) in contempt, affiliated with Guaidó, discreetly agreed to pay themselves $ 5,000 a month retroactively starting January and ending December of this year.

All in the mist of an informal meeting by electronic means where a “Special Law of the Fund for the Liberation of Venezuela and Attention to Vital Risks” was approved, consisting of the distribution of 80 million dollars, 23% of what was stolen by Trump from Venezuelans.

17% of the $ 80 million would go to “the defense and strengthening of the national legislature and the social protection of its members.”

Goodman and Avendaño confirm the existence of the salary or “aid” even though no public parliamentary document refers to the payment.

The AP journalist stresses that “two legislators and three assistants from Guaidó previously confirmed the plan” while Avendaño refers to a source, an official from the “interim government” of Juan Guaidó, who confirmed that “they circulated a list that is allegedly from the OFAC (Office of Administration of Foreign Assets of the Treasury Department) for the release of these resources.”

None of the sources reveal their name due to the retaliation they may receive from those who claim to defend democracy in Venezuela and the world, however they allude to the fact that the decision generated “a fierce debate that lasted months and that threatened to divide (even more) the anti-Maduro coalition,”

The faction that supports Luis Parra, president of the National Assembly elected last January, may not be part of said payroll since it has even received threats of sanctions for supporting a dialogue with the government and rejecting unilateral coercive measures applied by the United States and the European Union against Venezuela.

Goodman, Avendaño and others point out that during the five years of legislative administration, the payments that anti-Chavista deputies have received, most in the AN amount to one thousand dollars a month without explaining the origin.

They add that it is much less than what a legislator earns elsewhere in Latin America and that some legislators would surely refuse to raise the amount.

Certain conditions apply to the fraud bonus for health workers

The so-called “Liberation Fund” stipulates a majority disbursement (45%) in social spending to “alleviate the humanitarian crisis,” in principle they would issue three monthly payments of $ 100 each for the “health heroes”, whose payment Guaido announced would be through digital wallets managed by the Organization of American States (OAS) at a cost of $ 9.2 million (less than 3% of what was stolen by Washington).

This was announced by Guaidó and Alfonso Marquina, who serves as president of the Finance Commission of a tutelage network that insists on being called the National Assembly.

However, the PanAm Post, citing a “high source” of the OAS, has affirmed that the institution will not serve as comptroller of the resources due to “statutory and legal difficulties in carrying out this work.”

Since the announcement of the aforementioned bonus, there was talk of 60 thousand doctors and nurses fighting the coronavirus pandemic, however the number dropped to 45 thousand, and it should be noted that to date, there are more than 100 thousand health workers activated against the global pandemic in Venezuelan streets, hospitals and health centers.

It was recently learned that the registration of health personnel on the website is only an application to which the economic allocation will depend on certain requirements.

The self-proclaimed information “ministry” stated that “the selection of applicants will be prioritized based on the following criteria: the role they perform, their socioeconomic data and workplace. It is important to emphasize that receiving applications does not imply admission to the program.”

Guaidó assured that all medical, nursing and health workers “may choose to obtain this support without distinction of political color,” in addition, the accompanying media scaffolding has promoted expectations in this regard and maintains a campaign of “validation” of the postulates, without there being transparency regarding the criteria of allocation of bonus.

Shocks inside the money cyclone

The American outlet The Grayzone has detailed that, from 2017 to December 2019, the Trump administration spent at least $ 654 million (almost double what was stolen from Citibank) in “aid” programs related to Venezuela.

Although Washington claims it was earmarked for humanitarian efforts, much of the money from American taxpayers financed attempts to destabilize and overthrow the Venezuelan government.

At least 128 million of this money from USAID went directly into the pockets of the leaders of the coup operation.

A report from Los Angeles Times July 2019 cites a legislative assistant who alleged that the diversion of funds from USAID “pays Guaido and his officials’ salaries.” This caused a division in the anti-Chavista wing of Parliament and keep alive divisions regarding the destination and use of the funds.

RELATED CONTENT: Sixteen Venezuelans Have Died from Covid-19 Abroad: Maduro Calls for Them to “Come to be Cured in Their Homeland”

Faced with the request made by their ranks to process funds to resolve some problems that the same sanctions have caused to national life and to face the Covid-19 with them, the leaders of the coup have affirmed that they cannot.

Economist Francisco Rodríguez, director of Torino Economics , quoted the US financial advisory firm Bloomberg and recalled that “on past occasions, (Guaidó) has made significant mobilizations of funds to pay obligations whose legality has been questioned.”

In his Twitter account he said that “it is the first time” that the Guaidó team “claims not to have access to their external accounts” and demanded transparency in the management of these funds by making public some of the various sources of financing:

He summarizes saying that the Guaidó faction may have between 3.6 and 12 billion dollars “for Venezuelans residing abroad and facing economic, health or other difficulties caused by the COVID crisis- 19.”

He also argued that the Justice First deputy “Carlos Paparoni declared that there were 3 billion dollars. They themselves approved $ 80 million a month ago to finance their travels. Don’t tell now that they don’t have money. ”

He agreed that the fake deputies and ambassadors should have a good salary, but that

“It is deeply disturbing that lawmakers are willing to approve a generous compensation package for themselves without having yet found the time to discuss how they can use the funds at their disposal to help Venezuelans.”

For his part, Gustavo Tarre Briceño, Juan Guaidó’s representative to the OAS, denied that the coup administration has 15 billion dollars, although he acknowledged that the amount of money “recovered”, which is actually available, does not amount to 400 million dollars.

Justice First deputy José Brito, who led criticism of Guaidó last January and is officially the President of the National Assembly, stated via Twitter :

In addition, Brito criticized that, while Guaidó approved that large sum of money to give to those deputies, the doctors who are fighting the Covid-19 will supposedly only receive $ 100. “To doctors, only a shitty $100, but to those deputies who don’t do shit, who don’t even go to the National Assembly, $ 5,000,” he said.

The deputies in contempt who’ve added themselves the coup authorized the theft of $ 342 million but Trump only gave them $ 80 million, one wonders if the Treasury Department will continue to apply the same method when they “legislate to recover” the rest of the funds withheld due to the sanctions.