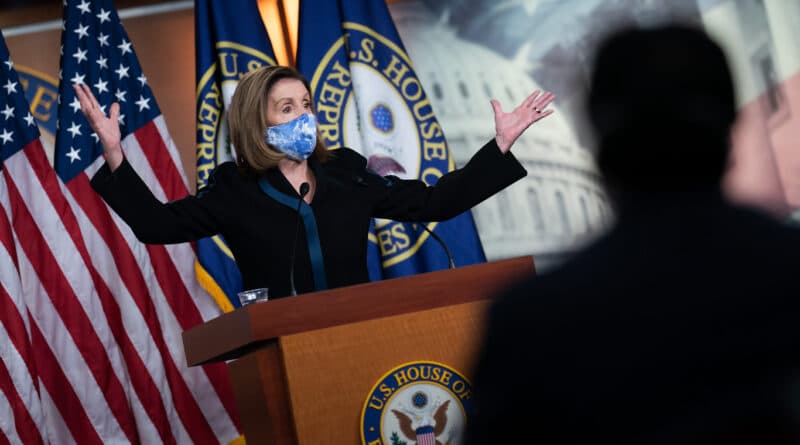 Lawmakers finally agreed to a new coronavirus stimulus package yesterday and like the CARES Act, it appears to include huge new tax breaks for corporations and the very wealthy.

Lawmakers in Washington agreed to a new $900 billion coronavirus stimulus package yesterday. The bill, like the previous CARES Act, appears to include huge new tax breaks for corporations and the very wealthy. However, of most note to average Americans is the means-tested check of up to $600 plus $600 per child that Republicans and Democrats decided on.

Although far less than the $1,200 checks mailed out to Americans in the spring, Democratic lawmakers are presenting the deal as a triumph. Senate Minority Leader Chuck Schumer of New York described it as “a strong, strong shot in the arm to get things going.” Speaker of the House of Representatives Nancy Pelosi agreed, although she blamed the GOP for holding the agreement up. “What took so long is because we could not get our Republican colleagues to crush the virus…Why would they not want to invest in the science?” she said at a press conference on Sunday.

The bill also includes a $300 boost to federal unemployment benefits (half of what it was six months ago) and a pause on evictions for an unspecified length of time.

Despite senior Democrats’ spin, it appeared that the primary public reaction to the deal was one of anger, judging by comments on social media. “Congress just decided you get $600. Add that to the $1,200 from March, and it totals $6.69 a day since the country shut down in March. Both parties don’t care if we live or die or sleep in a box on a sidewalk in January,” said Professor Anthony Zenkus of the Columbia School of Social Work. “This country sucks,” and “Congress is laughing at the $600. They don’t give a shit about you,” were also popular refrains. Others described the $600 as “a slap in the face” rather than a shot in the arm.

They don't give a shit about you.

The $1200 last spring added to the $600 in January 2021 equals to $50 a week since the pandemic began almost a year ago. This country sucks. #StimulusCheck

David Sirota, a former speechwriter and senior advisor to Senator Bernie Sanders, described the bill as a “victory for an austerity ideology that somehow still reigns supreme in Washington,” and “not even the bare minimum that should be considered acceptable during an economic meltdown that has been punctuated by mass starvation and intensifying poverty.”

There was also considerable anger aimed at Speaker Pelosi herself. “You are corrupt and despicable,” wrote Palestinian-American journalist Ali Abunimah, “You denied people relief before the election as a political ploy and you still lost seats. Now you give people who are losing jobs and homes $600. The ice cream in your freezer is worth more than that!”

RELATED CONTENT: Over 43,000 US Millionaires Will Get “Stimulus Checks” Averaging $1.6 Million Each

Abunimah was referencing Pelosi’s April appearance on “The Late Late Show with James Corden.” In the middle of a drive to get people to stay home, she was interviewed from her own California mansion, appearing in front of a $25,000 refrigerator, revealing her penchant for gourmet ice cream costing $12-13 per pint. If Pelosi had hoped that the stunt would humanize her, she miscalculated, with many suggesting that it made her seem out of touch with every day struggling Americans.

$1200 was not enough, and #600IsNotEnough. Everyone in Congress should be ashamed of themselves. pic.twitter.com/dXCpfdmyro

While the $600 check will be a lifeline to many, before the presidential election, both parties were proposing far larger sums, with Republican Senator Tom Cotton suggesting a monthly stipend of $1,000-$1,400 per American, and Donald Trump arguing for a check of up to $2,000. And while Democrats are suggesting that, with Biden in the White House, passing comprehensive relief will be easier, history suggests the opposite.

During the Obama administration, Republican Senate Majority Leader Mitch McConnell used his power to stymie and shutter any legislation the president tried to enact. There will be every incentive for the Republican Party to do the same this time around in order to present Biden as every bit as incompetent as Trump at handling the pandemic.

As of Monday, 324,869 Americans — 0.1% of the population — have died of coronavirus. The United States currently leads the world in total cases, deaths, and active cases. No amount of stimulus checks will make up for so many unnecessary deaths caused.