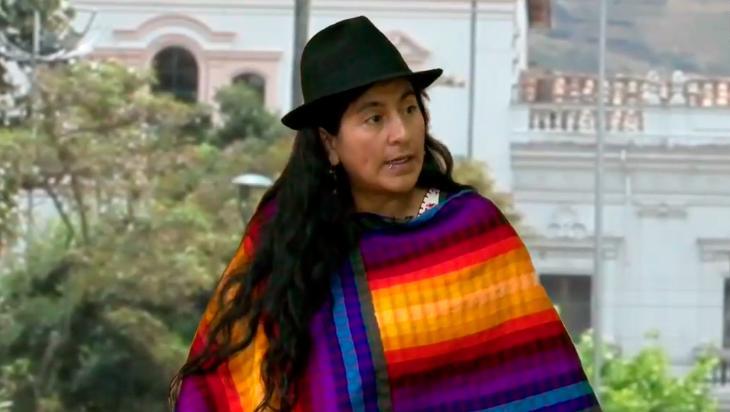 August 17, 2020.-  An episode of the documentary “Historias debidas”, on the plurinacional news portal, recounts the journey of the plurinacional feminist delegation through Bolivia after the coup. This is a conversation with Adriana Guzmán about intransigence and resistance.

Stories that must be told

The media are de facto accomplices of the government, they functionalize the Catholic and Evangelical religion for their war reports, paramilitary and parapolitical civilian groups enjoy government approval and operate with impunity, while the community media and alternative media are silenced. Leading activists are criminalized and persecuted. The operative word is lawfare (legal war): sentences are based on fictitious crimes and arbitrary arrests are the order of the day, and hundreds of Bolivians are in jail.

The docufilm “Historias debidas – stories to be told, the coup in Bolivia 2019”, by Andrés Irigoyen (director) and Ana Cacopardo (direction and screenplay) aired on Canal Encuentro on July 15, eight months after the Sacaba massacre. It recounts the massacres of Senkata (El Alto, La Paz) and Sacaba (Cochabamba), racism, discrimination and humiliation of the people and contempt for traditional women’s clothing and for the Wiphala, the flag of indigenous peoples. It contains courageous, moving and unpublished stories of women whose children have been wounded by military helicopters or killed by police. The injured women describe the derisory treatment given to them in hospital, the refusal of treatment and the mocking advice to be treated by some traditional healer or by Morales himself, because they are indigenous and not white.

Feminist Adriana Guzmán describes in an interview the coup d’état of November 10, 2019 and recounts, from the point of view of popular communities, how Jeanine Añez, Arturo Murillo, Fernando López, Karen Longaric and Oscar Ortiz have reigned with unlimited power and arrogance since they took over the government, trampling on the constitution and the law. “For 14 years we have had this wonderful constitution of the multi-national state, written by the people themselves, which has guaranteed us a dignified life”, said Guzmán regarding the violation of constitutional law due to the coup.

We will never be your domestics again

“The Right has prophesied that, sooner or later, we will return to be their maids,” Guzmán is outraged, but adds: “they want to wait, we have answered”. The reports convey anger and sadness, but at the same time they show how important it is not to remain silent, but to publicly condemn the arrogance and brutality of the Añez government.

“They called me a fucking whore.”

Gregoria Sires reports her experience with military and police brutality. Her son Omar Calle was killed on 15 November, during a peaceful march of the cocaleros. “They called me a fucking whore and asked me how much Evo paid me. They took my money, kicked me and broke my hand.” She found out from the news that her son had been killed in the hospital waiting room. “I didn’t even wait for them to treat me,” she sobbed, “I ran straight out of the hospital looking for my son.” The voices of widows, mothers and fathers, brothers and sisters who lost a family member in the massacres of the Añez government and its ministers, Arturo Murillo and Fernando López, are not heard on the radio, on TV or in Bolivian newspapers. To find them you have to use international media such as the Argentinean Canal Encuentro, or social networks.

The docufilm is clear: those who speak about life, democracy and freedom every day in the media that support the government are acting with a brutality that must not be forgotten. The people of Bolivia demand justice and regard them as violent and seditious terrorists. How long will it be before the Sacaba and Senkata massacres are atoned for?

She is an activist of Bolivian community feminism. She took to the streets to repudiate the coup that overthrew Evo Morales and during the 8M she shouted the slogan “No coup d’état nor coup for women”. Ana Cacopardo explores Adriana’s biography to understand some keys to the Bolivian process. A trip to Bolivia that brings us the voices silenced by persecution and racist violence.