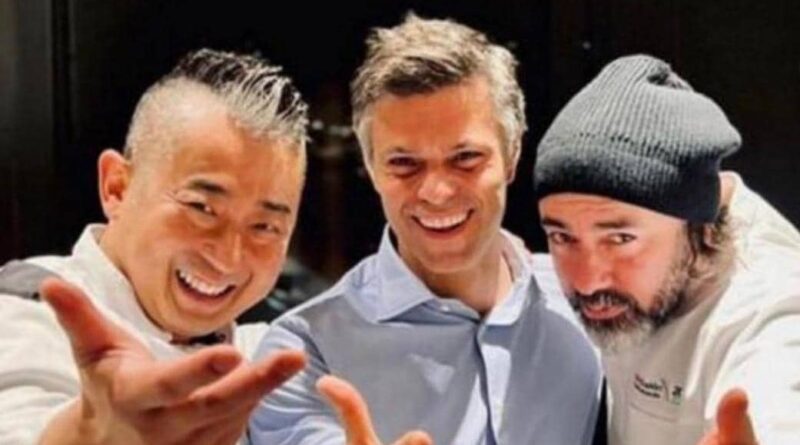 After receiving criticism throughout social media platforms in response to his calls for primary elections in Venezuela, the fugitive from justice, Leopoldo López , reappeared while enjoying a luxurious and expensive meal at a restaurant in Madrid, Spain, where he remains protected by the government of that European “socialist” country.

The photo, posted on various platforms, aroused comments regarding the “quality of life” that the far- rightist boasts of, as it contradicts the narrative that he permanently maintains about his alleged “struggle” for the benefit of the Venezuelan people and his “concern” for the future of the South American nation.

As a result of the images, the name López was one of the hottest topics on Twitter Venezuela. The images showed that he had attended a renowned gastronomic festival in the Spanish capital, where he mingled with the likes of famous Japanese chef Hitosi Hamada.

According to mainstream media, the minimum cost per couple to consume a meal at the exclusive establishment of chef Hamada is no less than a thousand dollars. The restaurant is famous for its specialty, Wagyu steaks, and has branches in several countries.

In the struggle from a place of comfort
The “political trajectory” of Leopoldo López, since he become a Venezuelan fugitive in Spain, is characterized by his constant and frequent trips, to forums and spaces in which he dedicates himself to promoting a campaign against Venezuela and revealing his conspiracy plans against its government. Meanwhile, paparazzi frequently spot him and his family in expensive restaurants in the also very expensive Salamanca neighborhood, in Madrid, where he lives.

In recent days, in addition to enjoying the gastronomic delicacies of Spain, Leopoldo López also traveled to Harvard, where he asserted that primary elections for the Venezuelan opposition “are the only way forward, that could mobilize the Venezuelan people.”

Everything indicates that López intends to adjust his plans regarding politics in Venezuela after years of demonstrating his coup-mongering spirit in his various attempts to destabilize the peace of the nation.

Opposition leader Eduardo Fernandez has doubts
In a recent radio interview with right-wing longtime Venezuelan politician, Eduardo Fernandez, he mentioned that there are more that 120 candidates from the right wanting to give themselves a shot in the primary elections. For Fernandez, the only chance for the opposition to win the upcoming presidential elections in 2024 depends on them reaching a unitary agreement, which doesn’t necessarily mean organizing primary elections.

Eduardo Fernandez stressed that from his perspective on the current level of division among the opposition, they might need two or three primaries within the Venezuelan right wing in order to choose a single candidate, and even in that scenario no one could guarantee that all of the parties would respect the results. This means, according to the opposition leader, that G4 might have to organize their own primaries, then the other opposition force know as Alianza Democratica might also have to organize its primaries, and after that a second level of primaries could be the solution to choose the candidate between these two main opposition groups.

This comments were stressed this Wednesday, April 27, during an interview with Venezuelan journalist Mari Pilli Hernandez on her Union Radio show Sin Duda.