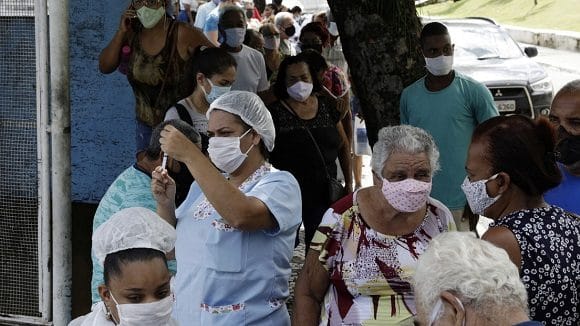 February 22, 2021 – In Brazil, cases of elderly individuals vaccinated with air have caused an outrage. Recent videos emerged shared by relatives of the elderly who underwent simulated vaccinations with empty or fake syringes.

The images went viral on social media networks and were broadcast by Brazilian media. The videos show the moment in which the health personnel insert the needles, but don’t inject the dose of the drug. The Civil Police of Rio de Janeiro issued a statement which indicates that if the investigations confirm there was a diversion of doses or some other irregularity, health professionals may be accused of embezzlement with penalties of up to 12 years in prison.

A nurse has already been suspended in Petrópolis, a city in Rio de Janeiro, confirmed the town’s Health Secretariat. A video showed a 94-year-old woman who received an injection without the drug. The health professional assured that it had been an unintentional failure and that she had not perceived problems at the time of inoculation.

Another case occurred in the city of Niteroi, where a professional pretended to apply the dose to a 90-year-old woman, and was recorded by the relatives who accompanied her. The police charged the nurse with embezzlement.

“The analysis of the video makes it clear that she was aware she wasn’t applying the vaccine. She was even alerted and questioned by the family and she responded in an ironic manner,” Commissioner Luiz Henrique Pereira explained to Brazilian media.

For the local government these are isolated events. “We understand that it’s a fault, but we don’t want to take the side of these accusations being raised,” said the municipality’s Health Secretary Aloísio Barbosa Filho. Despite their statements, they reinforced the vaccination protocol to try and avoid more cases of air vaccines.

Brazil is one of the countries hardest hit by COVID-19. More than 244,000 Brazilians have died from COVID-19, and over 10 million cases have been registered since the start of the pandemic. The situation in the country is critical—it is currently experiencing the second wave of infections, with at least one thousand deaths each day.

Health authorities also foresee that infections will multiply with the spread of new strains of the virus. On the other hand, in Rio de Janeiro (the state capital), Salvador (Bahia), Campo Grande, Teresina, and Cuiabá (Mato Grosso), inoculation was suspended due to a lack of vaccine doses. Only about two percent of the population has been immunized.

General Eduardo Pazuello—appointed Minister of Health by Bolsonaro—faces criticism from a group of Brazilian mayors in the National Confederation of Municipalities who urgently demand his resignation. “His leadership didn’t believe that a vaccine was the way out of the crisis, and didn’t carry out the necessary planning to acquire the vaccines,” the group said in a statement issued this week.