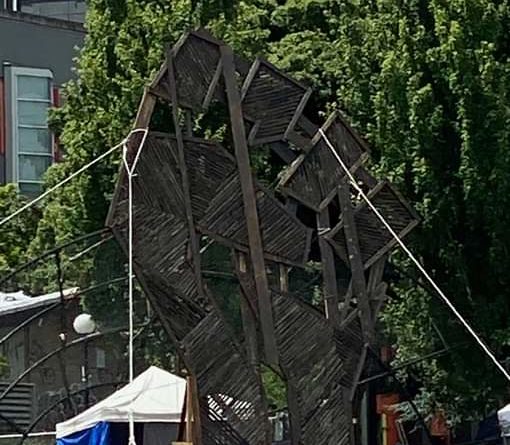 At approximately 5:30 AM Wednesday an advancing phalanx of police brandishing batons and pepper spray canisters, enjoined by a federal judge, cleared out the the 4 block Capitol Hill Organized Protest (CHOP) zone as well as nearby Cal Anderson park. Police arrested at least 32 people unable to flee and police also set up perimeters larger than the CHOP was at any time, covering approximately 16 blocks. Businesses within the 16 block area are effectively closed and the Seattle Times reports that any people wishing to leave the area must exit through the southern border on Pike Street.

Seattle maintenance workers were also observed starting to dismantle the giant wooden fist (approximately 20 feet tall) that adorned an area near home plate at Cal Anderson park and was a recognizable symbol of CHOP. Government workers are tearing down protester statues.

On the ground, it appears the CHOP has been displaced, but CHOP organizers like Naudia Miller of Black Collective Voice have long said that the CHOP is not a specific geographic area but a movement that continues on.

The heart of the movement has moved to the streets surrounding what might be described as the Seattle Police Autonomous Zone or SPAZ, where patrons are not able to visit bagel shops open every day during CHOP and some apartment residents were photographed fleeing the area with luggage as at least temporary refugees. Seattle Parks department and Transportation department employees are busy painting over artwork and graffiti with a neutral dark beige color.

Spontaneous demonstrations are developing at locations like Broadway and Pine as demonstrators flex to the new borders established by the Seattle Police Autonomous Zone or SPAZ. Police at at least six perimeters were asked for permission to go to the bagel shop Eltana near the police precinct at 12th and Pine but permission was denied. Police do not say when businesses open during CHOP will be able to reopen but they assume it won’t be too many days.

Reaction to the forced displacement of CHOP and local residents and businesses is mixed. Some consider disbanding CHOP to be necessary and they look the other way or are left speechless with the irony that only now are businesses closed and residents blocked, but the critique of the CHOP had been that it interfered with businesses and residents. To the extent that interference existed during CHOP it is greatly amplified now because of the SPAZ set up by Seattle police. Other residents and especially protesters appreciate that the problems alleged to have been created by CHOP are now amplified by police reasserting full control of the area.

For protesters, this action follows a clear and nearly universal pattern: police create a situation and then blame the consequences solely on protesters. This happened with the creation of CHOP, which occurred because of a surprise police abandonment of the East precinct. It happened with each and every shooting that emanated from outside CHOP and was directed at CHOP, but the existence of CHOP was blamed for the violence. And now, business closures and displacement of residents is blamed on the need to get rid of CHOP, as if cleaning up an area looking like a farmer’s market requires some sort of privacy.

The Seattle Times quotes a man providing stark contrast between the feelings of safety and community he experienced within CHOP and the violent attacks on CHOP that were nevertheless blamed by the media on CHOP:

A man named Jay, who is homeless and stayed at the encampment in Cal Anderson Park for two weeks, said he was sorry to leave.

“Other places are sketchy, but I felt safe here,” he said. “This place was based on respect. I don’t know where I’m going to go.”

At bottom, the Seattle Police Autonomous Zone is creating refugees, closing businesses and tearing down protest statues and artwork today. They consider this a restoration of order and, as with cases of police brutality, they blame the victims for making police actions necessary.