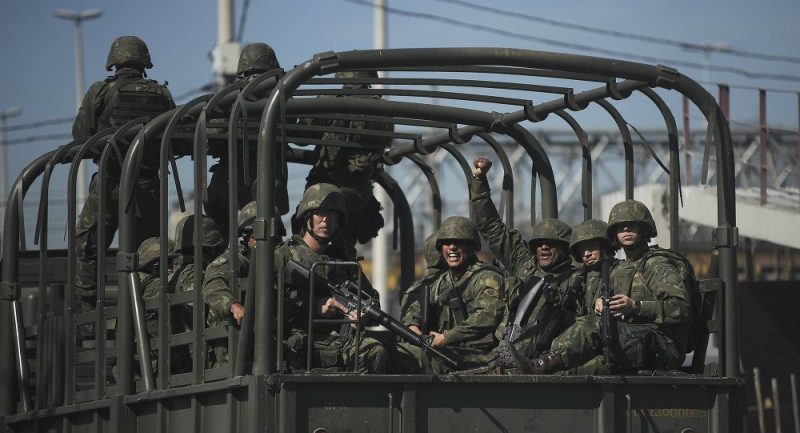 21/Mar/2019.- The US Government wants Brazil to be part of NATO, to have more countries within that Atlantic alliance that support it in its purpose of exercising military action against Venezuela, said the international analyst Basem Tajeldine to Sputnik.

US President Donald Trump announced that he will turn Brazil into a preferred military ally extra NATO (North Atlantic Treaty Organization), and did not rule out the possibility of the South American nation becoming a member of the alliance.

RELATED CONTENT: Caracas on Statements on Country’s Future by US, Brazilian Leaders: ‘Dangerous’

Tajeldine said that the US has not carried out any “military adventure” without having the support of the neighboring countries of the nation that is targeted.

In this regard, he recalled that last year Colombia formalized its membership as a global partner of NATO, whose action was rejected by some countries in consideration that it “violated peace” in the region.

The global partner category was created to allow alliances beyond the North Atlantic region, which covers the US, Europe and Canada, and does not necessarily imply participation in military operations, but cooperation in areas of mutual interest in terms of security.

For the specialist, the position of Brazil before the intentions of Trump, show the submission of the Government of the president of that South American country, Jair Bolsonaro, to the USA.

“The subordination of the president of Brazil to the United States is regrettable (…) Bolsonaro is a character who is attracted by this supremacist policy, by that foreign policy blackmailer, hegemonic on the part of the United States,” he said.

Armed forces
For his part, Brazilian Foreign Minister Ernesto Araújo said on Wednesday that the possible entry of his country to NATO would be a way to get even closer to the West.

However, Tajeldine, who is a member of the Communist Party of Venezuela, believes that the Brazilian Armed Forces will not allow that nation to enter the Atlantic alliance.

“I see it completely difficult for Donald Trump’s proposal to give Brazil to NATO to flourish, I see it difficult since there have been important events within Brazil and very interesting positions assumed by some military personnel who have a clear position on the power that Brazil represents in the region,” he said.

The proposal of Brazil’s entry into NATO came after the meeting between Presidents Trump and Bolsonaro in the White House. where one of the main issues they addressed was the situation in Venezuela.

Trump said he has not yet imposed the toughest sanctions against Venezuela, while Bolsonaro pledged to work on the “restoration of democracy” in the Caribbean country.

The statements were rejected by the Venezuelan government, which described them as dangerous, considering that “it is a threat to world peace and security.”

The governments of the US and Brazil have supported the opposition deputy Juan Guaidó, self-proclaimed president in charge of the country, in his campaign for President Nicolás Maduro to leave power.

Guaidó had been elected on January 5, president of the National Assembly (unicameral parliament), in contempt since 2016, a designation that was annulled by the Supreme Court of Justice on January 21.

President Maduro, who assumed his second term on January 10 after elections that the opposition boycotted, called Guaidó’s declaration as a coup attempt and blamed the United States for having orchestrated it.

Guaidó was immediately recognized as interim president by Colombia and the United States, to which some 50 countries joined, while Russia, China, Cuba, Bolivia, Iran and Turkey, among others, maintain support for the Maduro Government.

Mexico and Uruguay, for their part, refuse to recognize Guaidó, declare themselves neutral and propose a dialogue between the parties to overcome the crisis.