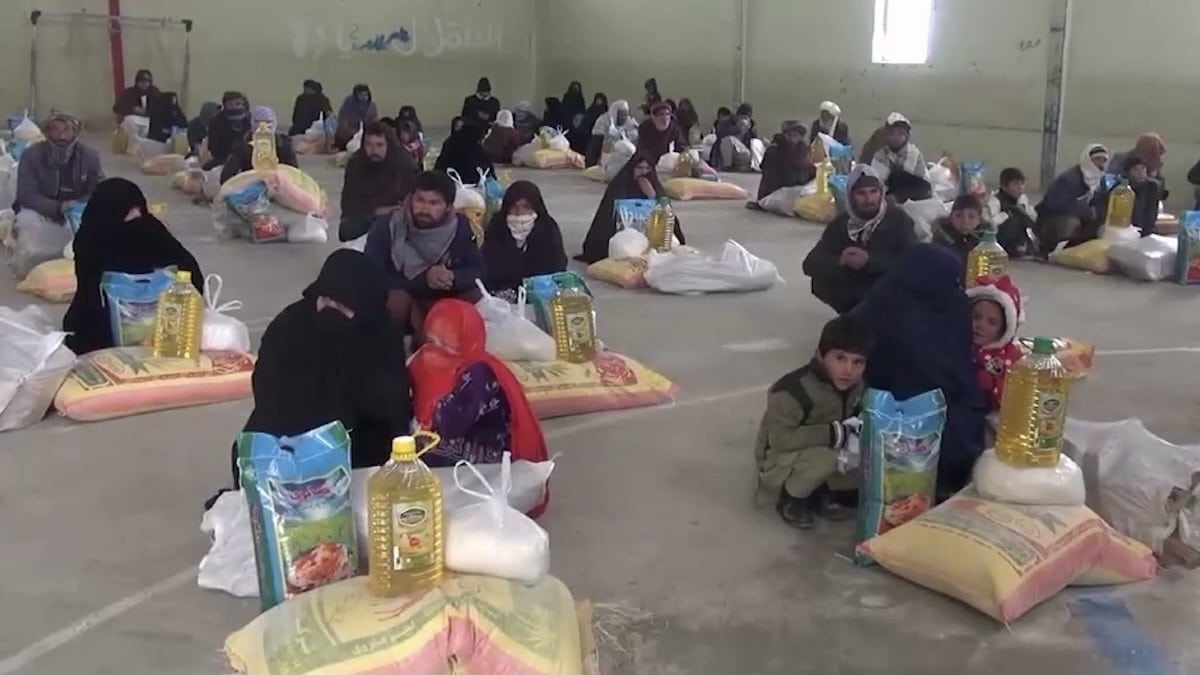 The UN has issued an urgent appeal to countries across the world to raise billions of dollars in aid for Afghanistan amid an impending humanitarian catastrophe.

On January 11, 2022, the United Nations (UN) Emergency Relief Coordinator Martin Griffiths appealed to the international community to help raise $4.4 billion for Afghanistan in humanitarian aid, calling this effort, “the largest ever appeal for a single country for humanitarian assistance.” This amount is required “in the hope of shoring up collapsing basic services there,” said the UN. If this appeal is not met, Griffiths said, then “next year [2023] we’ll be asking for $10 billion.”

The figure of $10 billion is significant. A few days after the Taliban took power in Afghanistan in mid-August 2021, the US government announced the seizure of $9.5 billion in Afghan assets that were being held in the US banking system. Under pressure from the United States government, the International Monetary Fund also denied Afghanistan access to $455 million of its share of special drawing rights, the international reserve asset that the IMF provides to its member countries to supplement their original reserves. These two figures—which constitute Afghanistan’s monetary reserves—amount to around $10 billion, the exact number Griffiths said that the country would need if the United Nations does not immediately get an emergency disbursement for providing humanitarian relief to Afghanistan.

A recent analysis by development economist Dr. William Byrd for the United States Institute of Peace, titled, “How to Mitigate Afghanistan’s Economic and Humanitarian Crises,” noted that the economic and humanitarian crises being faced by the country are a direct result of the cutoff of $8 billion in annual aid to Afghanistan and the freezing of $9.5 billion of the country’s “foreign exchange reserves” by the United States. The analysis further noted that the sanctions relief—given by the US Treasury Department and the United Nations Security Council on December 22, 2021—to provide humanitarian assistance to Afghanistan should also be extended to “private business and commercial transactions.” Byrd also mentioned the need to find ways to pay salaries of health workers, teachers and other essential service providers to prevent an economic collapse in Afghanistan and suggested using “a combination of Afghan revenues and aid funding” for this purpose.

Meanwhile, the idea of paying salaries directly to the teachers came up in an early December 2021 meeting between the UN’s special envoy for Afghanistan Deborah Lyons and Afghanistan’s Deputy Foreign Minister Sher Mohammad Abbas Stanikzai. None of these proposals, however, seem to have been taken seriously in Washington, D.C.

A Humanitarian Crisis
In July 2020, before the pandemic hit the country hard, and long before the Taliban returned to power in Kabul, the Ministry of Economy in Afghanistan had said that 90 percent of the people in the country lived below the international poverty line of $2 a day. Meanwhile, since the beginning of its war in Afghanistan in 2001, the United States government has spent $2.313 trillion on its war efforts, according to figures provided by Watson Institute for International and Public Affairs at Brown University; but despite spending 20 years in the country’s war, the United States government spent only $145 billion on the reconstruction of the country’s institutions, according to its own estimates. In August, before the Taliban defeated the US military forces, the United States government’s Special Inspector General for Afghanistan Reconstruction (SIGAR) published an important report that assessed the money spent by the US on the country’s development. The authors of the report wrote that despite some modest gains, “progress has been elusive and the prospects for sustaining this progress are dubious.” The report pointed to the lack of development of a coherent strategy by the US government, excessive reliance on foreign aid, and pervasive corruption inside the US contracting process as some of the reasons that eventually led to a “troubled reconstruction effort” in Afghanistan. This resulted in an enormous waste of resources for the Afghans, who desperately needed these resources to rebuild their country, which had been destroyed by years of war.

On December 1, 2021, the United Nations Development Program (UNDP) released a vital report on the devastating situation in Afghanistan. In the last decade of the US occupation, the annual per capita income in Afghanistan fell from $650 in 2012 to around $500 in 2020 and is expected to drop to $350 in 2022 if the population increases at the same pace as it has in the recent past. The country’s gross domestic product will contract by 20 percent in 2022, followed by a 30 percent drop in the following years. The following sentences from the UNDP report are worth quoting in full to understand the extent of humanitarian crisis being faced by the people in the country: “According to recent estimates, only 5 percent of the population has enough to eat, while the number of those facing acute hunger is now estimated to have… reached a record 23 million. Almost 14 million children are likely to face crisis or emergency levels of food insecurity this winter, with 3.5 million children under the age of five expected to suffer from acute malnutrition, and 1 million children risk dying from hunger and low temperatures.”

Lifelines
This unraveling humanitarian crisis in Afghanistan is the reason for the January 11 appeal to the international community by the UN. On December 18, 2021, the Council of Foreign Ministers of the Organization of Islamic Cooperation (OIC) held an emergency meeting—called for by Saudi Arabia—on Afghanistan in Islamabad, Pakistan. Outside the meeting room—which merely produced a statement—the various foreign ministers met with Afghanistan’s interim Foreign Minister Amir Khan Muttaqi. While in Islamabad, Muttaqi met with the US Special Representative for Afghanistan Thomas West. A senior official with the US delegation told Kamran Yousaf of the Express Tribune (Pakistan), “We have worked quietly to enable cash… [to come into] the country in larger and larger denominations.” A foreign minister at the OIC meeting told me that the OIC states are already working quietly to send humanitarian aid to Afghanistan.

Four days later, on December 22, the United States introduced a resolution (2615) in the UN Security Council that urged a “humanitarian exception” to the harsh sanctions against Afghanistan. During the meeting, which took place for approximately 40 minutes, nobody raised the matter that the US, which proposed the resolution, had decided to freeze the $10 billion that belonged to Afghanistan. Nonetheless, the passage of this resolution was widely celebrated since everyone understands the gravity of Afghanistan’s crisis. Meanwhile, Zhang Jun, China’s permanent representative to the UN, raised problems relating to the far-reaching effects of such sanctions and urged the council to “guide the Taliban to consolidate interim structures, enabling them to maintain security and stability, and to promote reconstruction and recovery.”

A senior member of the Afghan central bank (Da Afghanistan Bank) told me that much-needed resources are expected to enter the country as part of humanitarian aid being provided by Afghanistan’s neighbors, particularly from China, Iran and Pakistan (aid from India will come through Iran). Aid has also come in from other neighboring countries, such as Uzbekistan, which sent 3,700 tons of food, fuel and winter clothes, and Turkmenistan, which sent fuel and food. In early January 2022, Muttaqi traveled to Tehran, Iran, to meet with Iran’s Foreign Minister Hossein Amirabdollahian and Iran’s Special Representative for Afghanistan Hassan Kazemi Qomi. While Iran has not recognized the Taliban government as the official government of Afghanistan, it has been in close contact with the government “to help the deprived people of Afghanistan to reduce their suffering.” Muttaqi has, meanwhile, emphasized that his government wants to engage the major powers over the future of Afghanistan.

On January 10, the day before the UN made its most recent appeal for coming to the aid of Afghanistan, a group of charity groups and NGOs—organized by the Zakat Foundation of America—held an Afghan Peace and Humanitarian Task Force meeting in Washington. The greatest concern is the humanitarian crisis being faced by the people of Afghanistan, notably the imminent question of starvation in the country, with the roads already closed off due to the harsh winter witnessed in the region.

In November 2021, Afghanistan’s Deputy Foreign Minister Sher Mohammad Abbas Stanikzai urged the United States to reopen its embassy in Kabul; a few weeks later, he said that the US is responsible for the crisis in Afghanistan, and it “should play an active role” in repairing the damage it has done to the country. This sums up the present mood in Afghanistan: open to relations with the US, but only after it allows the Afghan people access to the nation’s own money in order to save Afghan lives.