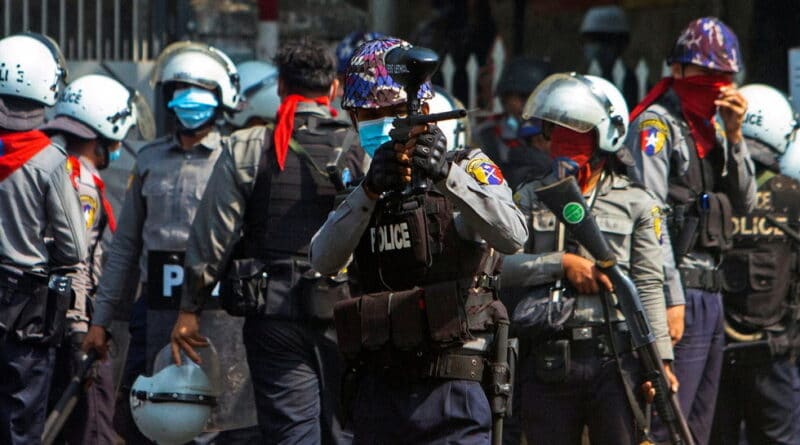 Sunday became the bloodiest day of protests that have been ongoing since early February, when the army arrested the democratically elected leader, Aung San Suu Kyi, over claims of election fraud.

“Police and military forces have confronted peaceful demonstrations, using lethal force and less-than-lethal force that—according to credible information… has left at least 18 people dead and over 30 wounded,” the UN human rights office said in a statement.

RELATED CONTENT: Understanding the Complicated Politics and Geopolitics of the Myanmar Coup

Photos and videos that claim to show the dead and wounded in the city were uploaded to social media.

One of those killed in Yangon was an educator who took part in a teachers’ protest that was broken up with the use of stun grenades.

Police also cracked down on a rally outside a local medical school, sending doctors and students in white lab coats fleeing. At least 50 medical workers were arrested at the site, a local doctor’s association claimed.

Reports of fatalities came from Mandalay, the country’s second-largest city, and Dawei in the south. Protests in several other towns were also dispersed with the use of violence by the army and police.

“We strongly condemn the escalating violence against protests in Myanmar and call on the military to immediately halt the use of force against peaceful protestors,” the UN body said.

Featured image: A riot police officer fires a rubber bullet towards demonstrators during a protest against the military coup in Yangon. © Reuters