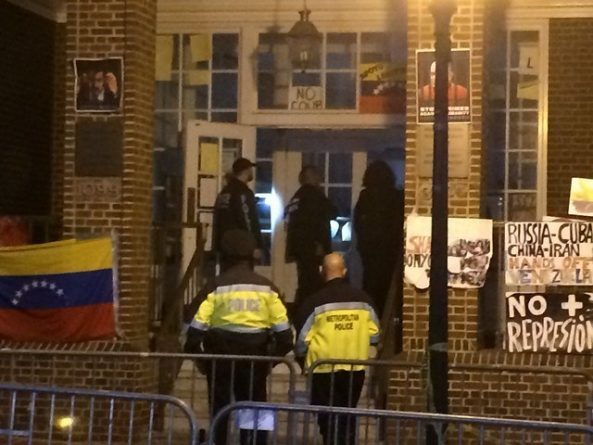 Washington, DC–On Monday night Secret Service, DC Police, and State Department agents attempted a coordinated raid on the Embassy of Venezuela to arrest activists that have been inside for a month. Mara Verheyden-Hilliard, an attorney representing the activists’ interests at the Embassy, intervened on their behalf as federal agents entered the building. She notified them that they had no legal authority to enter the Embassy when they did not present a signed warrant authorizing them to arrest the activists.

Beginning about 7pm, Metropolitan Police several times read an order to the activists over a loudspeaker outside the Embassy that the U.S. Government had recognized Juan Guaidó as the President of Venezuela and Carlos Vecchio as the Venezuelan Ambassador to the United States, and they were no longer welcome in the Embassy. Agents then ordered them to cease trespassing on Embassy grounds and that failure to immediately leave would result in their arrest. The activists did not appear at windows or acknowledge the order.

RELATED CONTENT: Urgent Message from the Embassy Protection Collective to US State Department

The activists, who call themselves the Embassy Protection Collective, are there at the invitation of the Venezuelan government. On Saturday, Venezuelan President Nicolas Maduro tweeted his support for them. U.S.-supported coup attempts led by Juan Guaido have failed, but the U.S. government persists in recognizing Guaido as the self-proclaimed president of Venezuela and expelled its diplomats. The U.N. recognizes President Maduro, who won reelection in May 2018 with 68% of the vote.

The activists held up signs last night reading: “Criminals break in. We have the keys.”

Secret Service Agents cut chains on the doors which had been placed there by diplomats before they left the country on April 24, then entered the Embassy with flashlights. They asked the activists to voluntarily leave, but they declined unless certain conditions were met under international law.

It turned out the order posted and read by police was produced on nondescript paper purporting to be by the order of Juan Vecchio and not authenticated with either a signature or stamp by any federal agency or authority, nor any stamp of the Venezuelan government. The agents left the Embassy after some consultation with Verheyden-Hilliard and did not arrest any of the activists remaining inside.

Earlier in the day, however, in anticipation of the coming raid, The Grayzone Project reporter Anya Parammpil and Mintpress News journalist Alex Rubinstein voluntarily left the Embassy. This left only four activists inside the Embassy. Others had left on Sunday or before. Police also forced the opposition to remove all signs, tents and equipment from outside the Embassy and move back to the opposite side of the street. They put up barricades and closed sidewalks around the embassy.

After agents exited the Embassy, they put zip ties around the front door handles and placed a barricade on the front porch. The remaining activists appeared at the windows as supporters cheered: “No Coup!” while the opposition gathered below railed against them, shouting: “Fuera!, Fuera!” (get out) from across the street.

The opposition has barricaded and besieged the activists for the past two weeks, not allowing any food or supplies to be delivered to the activists. Opposition grew enraged when they realized federal agents and other authorities outside the Embassy were not going to arrest or remove the activists.

Carlos Vecchio, the Venezuelan that the U.S. has installed as “ambassador” at the Organization for American States, had shown up at the Embassy with his staff for a short period in anticipation of being allowed to enter the building but was forced to leave without doing so. It was the second time he had been rebuffed in efforts to enter the Embassy as a result of activists refusing to leave. Three black sedans with tinted glass and federal license plates remained parked in front of the Embassy, while nearly 100 police from various agencies remained in the street and around the Embassy, sealing it off from public access.

It appeared agents we’re still planning to arrest the activists but could not carry out enforcement without a warrant. It was not clear if a warrant could be produced or what jurisdiction would have authority to issue a warrant. According to Mara Verheyden-Hilliard, it would be in violation of the Vienna Convention on diplomatic relations for any agency or police force to either enter or remove any of the activists without permission of the elected Government of Venezuela. She stated that regardless of whether representatives the U.S. government had chosen to recognize alternative representatives as the government of Venezuela, they could not enter under the Vienna Convention, a treaty of which the U.S. was a signer in 1961.

We will update this story later on Tuesday as it further develops.