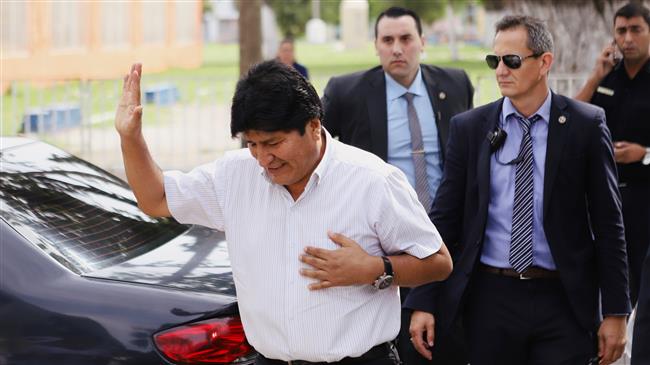 Bolivia’s exiled former president Evo Morales has called on his compatriots to form popular defense groups against potential acts of violence by the new government, which took power in a US-backed coup d’état against his government late last year.

In a recording leaked to the Bolivian radio, Morales was heard saying he and his supporters had been “too trusting” ahead of last year´s presidential election, and should have had a “Plan B.”

“If between now and in a little while…I were to return (to Bolivia) or someone else goes back, we must organize as in Venezuela armed militias of the people,” the former president said in the recording. “We were too trusting. The blunder: we did not have a ‘Plan B’.”

Morales, now in Argentina, has been in exile since he was forced to resign on November under pressure from the military in what he said was a US-backed coup d’état against his administration.

The country’s first indigenous president was granted asylum in Mexico back then but vowed not to back down and continue fighting from abroad. He later left Mexico for Argentina, where leftist leader, Alberto Fernandez, took office in December 2019.

In an interview with Reuters on Sunday, Morales confirmed it was his voice in the recording, saying people have a right to defend themselves if the new government moves to attack them.

He, however, said he had not meant armed with guns and was referring to citizen defense groups that had always loosely existed.

“We’re not talking arms, more like slingshots,” Morales said. “In some times (these groups) were called militias, in other times they were called union security or union police and in some places it is called communal guard. It is not new.”

Bolivia’s right-wing interim president Jeanine Anez reacted to the recording in a Twitter message, saying it indicated that “peace, reconciliation and democracy were never options for him.”

“Given the intention of sowing terror and violence, they will only find the Bolivian people united, and in the face of threats, our deepest democratic vocation,” Anez wrote.

Bolivian prosecutors have issued an arrest warrant for Morales over allegations of sedition and terrorism leveled against him by the Anez government. Morales denied the charges.

The interior minister also threatened to imprison Morales for the rest of his life.