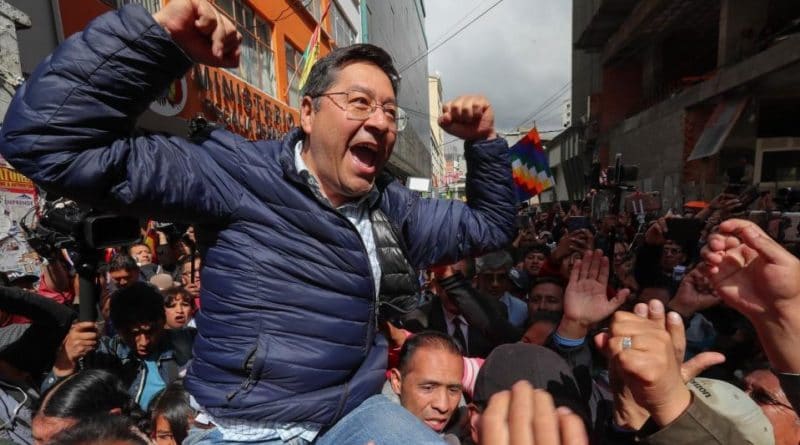 Madrid, Feb. 24 (EUROPE PRESS) – The candidate of the Movement To Socialism (MAS) for president in Bolivia, Luis Arce, has warned that the campaign for the elections of May 3 lives in fear for the lack of both freedom of expression and the rule of law.

“We are starting our campaign in Bolivia. There is still fear among MAS militants and in Bolivia to say something in favor of MAS. People know that this government calls me terrorist, an inciter and seditious,” said Arce in a statements to the Argentine radio station Data Urgente Radio.

RELATED CONTENT: Bolivia Proves that Breakdowns in Democracy are Coups

“In Bolivia there is no possibility of expressing yourself, there is no freedom of expression, there is no rule of law in our country,” he added. Arce has also stressed that the Supreme Electoral Tribunal (TSE) does not guarantee the impartiality and transparency necessary for the elections, since its president, Salvador Romero, was appointed by the self-proclaimed president, Jeanine Añez, who now is running as a candidate for the Presidency.

More precisely, Arce has warned that the “de facto government” established after the resignation of Morales and his ministers “is politically persecuting MAS-IPSP leaders, social organizations, former officials and senior government officials of President Evo (Morales) and, therefore, the conditions for political activity are not the best. ”

Along the same lines, the leader of the MAS, Evo Morales, exiled in Argentina after his controversial departure from the country amid allegations of coup d’etat, recently criticized the “dictatorship.” “In times of dictatorship, there are innocent people persecuted and criminals released. Community media are silenced and there is a violation of human rights, without any respect for International Law,” Morales posted on Twitter.

The MAS formula led by Luis Arce and his vice president candidate, David Choquehuanca, would be the most popular in the presidential elections next May 3 with 32 percent support, compared to 23 percent of Carlos Mesa and 21 percent. percent of the current interim president, Jeanine Añez, according to the Market and Samples survey published this Sunday by the Bolivian newspaper ‘Página Siete’.

In relation to the January survey, Arce climbs one point, from 31 to 32 percent, while Mesa climbs three points, from 20 to 23 percent. However, Añez is the candidate that has grown the most points, after going from 14 to 21 percent. With these results, Arce and Mesa would have to face each other in a second round.

Featured image: Upon leaving the Attorney General’s Office, Arce was received by hundreds of MAS supporters who shouted slogans in support of his presidential candidacy. Photo: Página 12, Jan 31, 2020