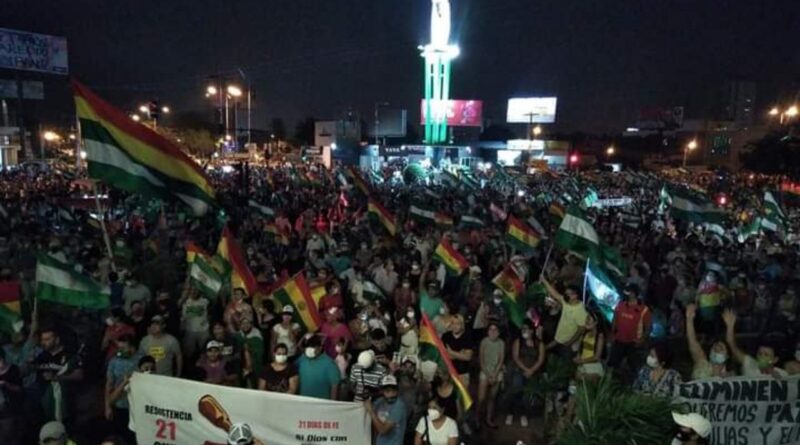 These days, Bolivia is being threatened by the confluence of anti-democratic interests of religious groups, paramilitaries and retired military, who seek to prevent the new government led by Luis Arce Catacora from taking office on November 8.

While the president of the Supreme Electoral Tribunal of Bolivia, Salvador Romero, affirmed that “the 2020 electoral process has concluded and has been fully validated,” some groups, which were joined by the Catholic Church, claim fraud and raise doubts about the cleanliness of the electoral process that gave the MAS as the winner, with a difference of more than 20% with respect to their immediate opponents.

This new wave of conspiracy against the return of democracy is led by sectors of the city of Santa Cruz, which now demand that the investiture of the new president be stopped and the elections annulled. And they are also asking for the intervention of the Armed Forces, to prevent the new government from taking office.

On the night of November 2, a town council of the Unión Juvenil Cruceñista, UJC, determined to ignore the results of the elections. They demanded a “citizen, military, and police” audit, instructed the blocking of institutions, announced that they will hold a vigil before the Police Command, and support the Committee for Santa Cruz and the Armed Forces.

But now it is no longer only the UJC, known in Bolivia for its violence and racism, but also some retired military personnel who are asking the still President Añez “not to let Luis Arce take possession and to form a Civic-Military government.

President Añez and her ministers have not emerged to respond decisively against these proclamations, which would be characterized as seditious, and therefore criminal, since they are surely concerned that the Parliament, which will soon conclude its term, recommended initiating a trial of responsibilities against the transitional president, for the commission of criminal offences.

The Catholic Church has joined this anti-democratic chorus, which seeks to convulse Bolivia, and despite the fact that the electoral process has concluded and was endorsed by international organizations, it has now decided to sow doubts and to ask for an external audit of the elections of October 18, 2020.

The announcement of the Unión Juvenil Cruceñista (UJC) to support the Armed Forces “so that they can do what they see fit with the country” and “bring order”, has provoked the rejection of the citizens, who have proceeded to unblock the roads in the absence of police.

Meanwhile, the group called the Cochala Resistance, which in fact are paramilitaries that fomented violence last year in the city of Cochabamba, now think that the Bolivians were bewitched to vote for the MAS, and are holding public events to “dismember” the voter’s card.

On social networks such as Facebook, it is possible to observe images of groups of people kneeling, praying, begging their god for an anti-democratic irruption, clamoring for a military takeover.

In that same city of Cochabamba, a group of people tried to seize police facilities and demanded that the police riot and that the Armed Forces take power, which led the Ombudsman, Nadia Cruz, to ask the Prosecutor’s Office to move against these actions that can be considered sedition.

In the city of La Paz, groups called “platforms” – few in number, but with a lot of press – protested at the doors of the Supreme Electoral Tribunal, demanding an audit of the elections.

The empty discourse of political arguments of some leaders is overflowing with and manipulated by religious fanaticism with no discussion of social proposals, much less economic ones, only using prayer and supplications to God to put the Armed Forces in government.

The evangelical churches in Bolivia are everywhere and do politics left and right. Both Luis Fernando Camacho, Jeanine Añez and the Korean ex-candidate Chi Hyun Chung have made sufficient demonstrations of their religious fanaticism, even passing over the political Constitution of Bolivia, which declares in the fourth article that “The State is independent of religion”.

The opposition to MAS protested against a change made by the Plurinational Assembly to a regulation that, according to the experts, does not contravene the political Constitution of the State. It is a modification of the regulation of debates in the Chamber of Deputies and Senators, to approve some decisions with an absolute majority and not by two thirds, as was established.

The president of the Santa Cruz Bar Association, Julio Eguez, indicated that the MAS parliamentarians modified the regulations, but that they have not violated the Constitution and that these acts are within the framework of the Magna Carta.

Attorney Eguez stated that the Constitution has not been changed, that in order to elect authorities such as the procurator, the comptroller, the Constitution remains in force, which defines that 2/3 of the Parliament is needed for such actions.

However, this is now being used as an excuse for the street protests and threats taking place in the days before the arrival of the international delegations that will attend the inauguration of the new government.

The leadership of the Bolivian Catholic Church does not have the best history of political activity in the country, and now, consistent with that behavior, it has joined the voices that generate instability.

During the days previous to the inauguration of the new elected government, the President of the Bolivian Episcopal Conference, Monsignor Ricardo Centellas, did not waste the opportunity to add fuel to the fire of Bolivian politics, when he indicated that the changes to the Parliament’s regulations “are not signs that give hope”.

But this political position of the Catholic leader is no longer surprising, since it is now known in more detail the key role that the leadership of the Bolivian Catholic Church played in the democratic rupture of November 2019.

It was that institution which called upon certain handpicked actors for the organization of a new government in Bolivia, on November 10-11, 2019. This was revealed by the director of a key organization of the Catholic Church, the Jubilee Foundation in Bolivia.

Incidentally, Monsignor Ricardo Centellas in the convulsive days of November 2019, prior to Evo’s resignation, joined the voices calling for his resignation when he said to “show your respect for Bolivia and Potosi, resign to pacify the country and assume your responsibility for the electoral fraud and do not continue provoking further uncertainty”.

This year, days before the elections of October 18, 2020, Monsignor Centellas gave a nod to the opponents of MAS when he said that in the last decades democracy has been weakened and that these elections were “an opportunity to consolidate it”, and he expressed that “we should not think so much about names, about people, but about the governability of the country”.

The religious leadership know that faith and beliefs should be kept out of politics, but they ignore this by rejecting a democratic government led by Luis Alberto Arce Catacora and David Choquehuanca. In fact, they are acting as a political party and manipulating their parishioners to promote their ideological leanings.

The military on the brink

In this scenario, we must remember that last July there was a serious conflict between the government and the Parliament, due to the fact that the Parliament made observations, which were not corrected, regarding the lists for promotion to generals of the Army proposed by the transitional president Jeanine Añez.

Faced with this situation, the commander in chief of the Armed Forces, General Sergio Orellana, in an act of insubordination, demanded that the senators approve the list of promotions that the government sent to the Assembly within a maximum period of one week.

On that occasion, General Orellana appeared before the Bolivian Parliament wearing combat gear, an act that did not generate even the slightest reproach from the Añez government.

Through Twitter, the President of the Bolivian Senate, Eva Copa, said that “If the act of promoting generals of the Armed Forces is carried out using some legal maneuver (a decree without ratification by the Senate), it will be evident that this government is de facto, hostile to the democratic system in Bolivia and with actions typical of a dictatorship.

Against the provisions of the Bolivian Constitution, the government of Añez promoted generals of the Army and the Police. This fact is important to remember in the current anti-democratic situation, since in the ranks of the Army there are generals who did not obtain that rank legally and are surely concerned about Bolivia’s return to the democratic path.

A factor no less important than now is the fear that in the days before the new president is sworn in, some of the military could embark on a coup d’état venture.

The Bolivian people have stoically resisted the humiliation, embezzlement and shame of misgovernment that seeks to remain unpunished. Now other minority fronts are joining in, but with media and perhaps military power, that are pursuing a coup attempt.

This will be a tense week for Bolivian democracy, but unlike other historical moments, the Bolivian people have overwhelmingly expressed their democratic decision and will not allow a backward step.