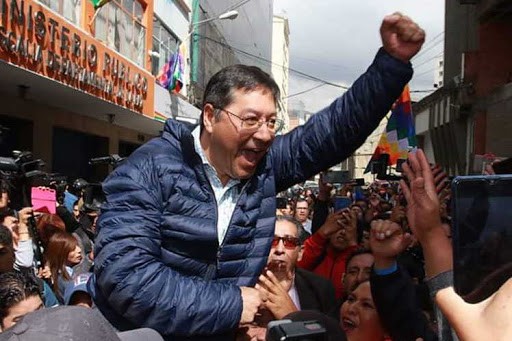 Luis Arce declared that the irregularities of the process are a sign that he is a victim of political persecution with the aim of undermining his race for the presidency of the Republic, a position for which he is considered a favorite

La Paz, Jan 29 (Prensa Latina) Bolivian presidential candidate for the Movement Towards Socialism (MAS), Luis Arce, explained that a hearing against him set by the coup government was suspended today due to irregularities.

Arce arrived back to Bolivia on Tuesday the 27th to start the presidential race. Immediately upon arrival he was summoned to testify in a case that did not exist against him 72 hours prior.

Analysts say that Bolivian de facto government, headed by Jeanine Áñez will apply the same lawfare political persecution that have been used against the most important political leaders from MAS after the coup d’etat against Evo Morales last November..

This morning, Arce went to the Public Prosecutor’s Office in this capital to comply with the summons, but the hearing was canceled due to the defense’s claim that the prosecutor’s signature was missing from the summons and that he did not know the details of the process.

For the above-mentioned reasons, recognized by the prosecutor Heydi Gil, the Prosecutor’s Office decided to suspend the hearing and set a new date, still unknown.

Upon his departure from the Justice building, Arce declared that the irregularities of the process are a sign that he is a victim of political persecution. Its the objective is the undermining of his race for the presidency of the Republic, a position for which he is considered a favorite.

I am a transparent man, I came to testify because I have nothing to hide, I am not corrupt, I am not a thief. My team of lawyers and the prosecutor herself noticed the procedural flaws in the notification of my person. This is eminently political against our MAS candidacy, declared Arce.

Former Minister of Economy and Finance during almost all of Evo Morales’ governments, Arce also warned that in order to reduce his chances of winning at the polls, he does not rule out the appearance of new legal cases.

The things that will get us out, is that the people will judge the way they proceed, arbitrarily, against a candidacy that they know has popular support, because we are absolutely innocent of anything they want to tell us, said the MAS candidate.

General elections in Bolivia are scheduled for May 3, and according to recent polls, the MAS duo of Arce and former Foreign Minister David Choquehuanca (for vice president) is the favorite.

Denunciations of political persecution of activists and leaders of this political movement and related organizations have been reiterated since the coup d’état that forced President Evo Morales to resign from office on November 10.