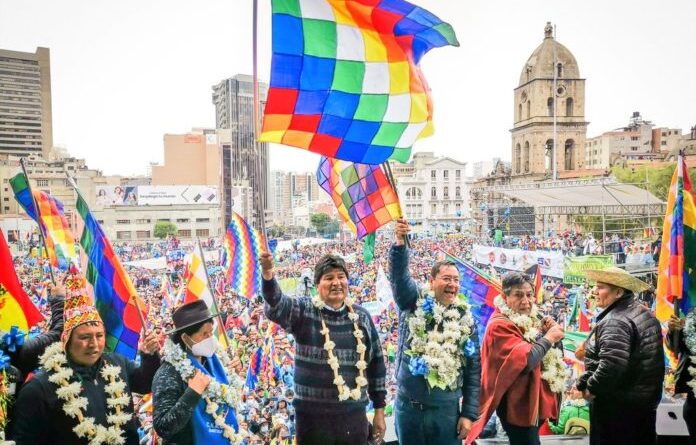 The 180 km “March for the Homeland” that set out from Caracollo, Bolivia, on November 23, arrived at the capital La Paz on Monday, November 29. The march was organized as a popular defense of peace and democracy against the seditious pretensions of the extreme right forces that are trying to carry out a coup against President Luis Arce.

The march was composed of union leaders, peasants, coca growers, workers and other social sectors. Tens of thousands of revolutionary sympathizers raised the Wiphala flag as a symbol of indigenous struggle and demanded respect for democratically elected Luis Arce’s presidency.

Bolivian President Luis Arce was visibly moved by the size of the 180km anti-fascist march yesterday, in defense of democracy and his government #MarchaPorLaPatria pic.twitter.com/j4wh0AQGWx

The patriotic revolutionary people of Bolivia have come out, once again, in defense of the country’s political and social stability; to defend the democratic gains that were threatened by the Jeanine Áñez dictatorship that overthrew Evo Morales in 2019.

Two years after that coup and one year after Bolivia regained its democracy, right-wing factions continue in their intention of ignoring the Bolivian people’s will that led Luis Alberto Arce Catacora to the presidency.

Democracy and leadership
Former president Evo Morales Ayma has remained at the head of the mobilizations. So has President Arce himself, who joined the march over the weekend. “With you we will never feel alone,” the president addressed the march. “Thank you my brothers and sisters.”

Breathtaking images of the march in Bolivia backing the @LuchoXBolivia government and opposing destabilization attempts https://t.co/qcfI77mul8

Evo Morales highlighted the determination of those who have joined the march from different corners of the country. The people of Bolivia have maintained, in their great majority, a conviction in the constitution and democracy, said former president Morales.

“The power of our revolutionary conviction has made this March for the Homeland one of the most important mobilizations in recent years,” declared Evo Morales during the march. “Thousands of our comrades have marched in strength, but peacefully, to the city of La Paz.”

President Luis Arce also thanked the people of Bolivia, who, after walking from all the nine departments of Bolivia for seven days under the sun and rain, arrived at La Paz to express their support for Arce’s government.

“Today,” said the president in his address to the marchers arriving in La Paz, “the Bolivian people have made history again with this act that surpasses all previous mobilizations that we have seen in La Paz’s main square. The people have demanded respect for their vote at the polls and have told the right wing that they will never again allow coups in Bolivia.”